NIGHT LAUNCH! It's been ages since I saw a night launch from the Kennedy Space Center. It's delayed, it's too cloudy, I'm watching TV and forget to look . . . But this week the launch came with the late news and was right on time:  11:03 PM. I watched the launch, ran outside, and there it was, a great red glow rising over my neighbor's house, clear as a bell, as the saying goes. I watched that big red splotch until it was the size of pinpoint. Wow! (FYI, the rocket was sending a probe to explore the sun.)

A ladies' group in my church held a Mother-Daughter Tea this week, and I was pleased to attend not only with Susie but with two of the grandgirls. (Hailey was off to Daytona with her church group, but not until after she posed with the rest of us for a "hatted" photo.) The hat I'm wearing, by the way, was purchased by my mother at Filene's in Boston somewhere around 1936-37, for attending Tea at the Harvard Faculty Club while my father was in Graduate School. I was thrilled to have the opportunity to wear it. (There are two blue velvet ribbons that trail all the way down to the waist in back.) 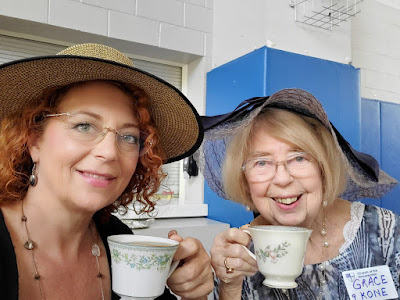 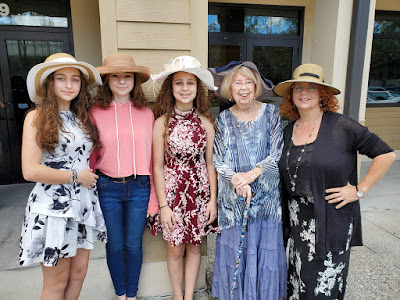 After looking at the Inventory I posted last week, a friend asked if I had ever blogged about Titles, and of course that instantly became the Topic of the Week.

Firstly, let me confess that I do not consider Titles one of my better skills, and yet after my experiences with some of my past publishers, I have come to the conclusion that I'm a lot better at it than some of the editors I've had. Also, after naming and re-naming forty-plus books, I'm getting better at it. So for what it's worth, here are some of my experiences with Titles.

HE SAID, SHE SAID. I absolutely hated the title for this book, but it was my first print book, and who was I to argue? Why did Kensington change my original title of Love At Your Own Risk? Because, I was told, the Marketing Department objected to the word "Risk." Happily, when indie-pubbed years later, it returned to its original title.

THE INDIFFERENT EARL. In a problem similar to my experiences with Kensington, my first book for Signet came out with a title that made me grind my teeth. Even one of the reviews mentioned that the hero was far from indifferent! My title, The Courtesan's Letters, was rejected because "it wouldn't play well in the Heartland." (Literal quote - that's what my editor said.) Needless to say, when I got my rights back, I indie-pubbed it under my title, not Signet's. Note:  Despite its indifferent title, this book was nominated for RWA's RITA award and was chosen Best Regency of the Year by Romance Readers Magazine.

THE MAJOR MEETS HIS MATCH. Now this one I confess to tossing out as a possibility and my editor seized it. It certainly fit the story, but when I indie-pubbed it, I changed it to The Temporary Earl. It's been a long time ago, but I suspect I was capitalizing on readers' love of titles. A major is a gentleman, but an earl - Wow!

THE LADY AND THE CIT.  I really liked this title, and I figured readers of Regency romance knew what a "Cit" was. But I later fielded enough questions about it that when I went indie with it, it became A Gamble on Love. A title that described this remarkable marriage of convenience without anyone having to ask what a "Cit" was. (FYI, Cit was a not-so-complimentary name for men who actually earned a living rather than lived on inherited money. Some say it comes from the French Revolutionary "citizen"; I tend to think of it as a term for men who worked in the City of London, what we'd call "the business district.")

ROSES IN THE MIST.  I chose this title for my only Young Adult book all by myself. And I loved it. But when I eventually indie-pubbed it, I chose The Captive Heiress instead. Why? Probably because it was more attention-grabbing. With all the books on Amazon, Smashwords, and other vendors of indie books, an author needs all the eye-catchers he/she can get.

THE LAST SURPRISE.  This Christmas novella was published as part of an anthology - that year "Surprises" was the theme. When I indie-pubbed it, I wanted a title that gave a better hint of the story, and The Lady Learns to Love was born.

Grace note:  I have decided to leave the subject of naming a book from scratch for next week.  Lessons to be learned from the above:  1) editors are subject to the dictates of Marketing Departments; 2) busy editors do not always come up with the best names for your precious baby. So, if you don't like the title given your book—and if you think you can do it without alienating your meal ticket!—object. But do not object unless you have a better title to offer and good reasons why your title is better. Let's face it:  "Don't bite the hand that feeds you" is an adage that still prevails. Remind yourself that when you go indie, you can do as you please!

A peek at the Social Media ad for Shadows Over Greystoke Grange: 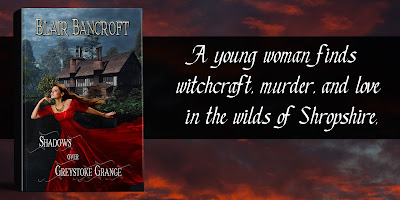