A friend I've known since age 16 when her mother became my grandgirls' nanny, now has two children of her own and has recently gone into the party-planning business. Here are two of the 32 pics she recently posted to Facebook. What an incredible job she and her business partner have done. If you live in the Orlando area, here is Maria's information: 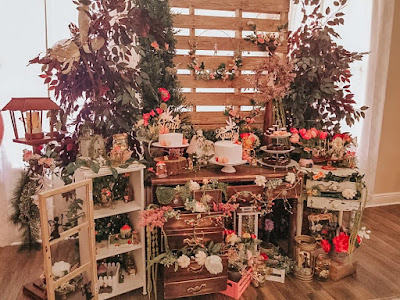 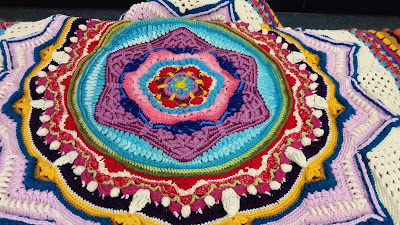 I frequently look at other people's books and think, "Oh, wow, what a great title!" Frankly, I struggle with mine, and there's no doubt some are better than others. But since, for me, it's necessary to have a title at the top of the page when I type "Chapter 1," creating a title is part of the initial process of writing a book. I would love to be able to sit down and write at least several chapters, get to know my characters, get the feel of the plot before finding a title, but nope, my mind doesn't seem to work that way.

Have I changed a title in the course of writing a book? Oddly enough, only two come to mind. Hidden Danger, Hidden Heart went through several titles from the time I wrote "Chapter 1" to the time it went online. (I would list them here, but frankly I can't remember what they were.) And Rebel Princess started out as Blue Moon Rising for the simple reason I expected it to be a one-off, a fun digression into SciFi. Instead, the story insisted on taking four books, and Blue Moon Rising became the name of the series, necessitating a new title for Book 1.

Other than that, I've followed pretty much the same process each time:

1. I ask myself what my book is about. How can I cram the essence of my tale into a few words? Who or what is the most important character? What is it I want to emphasize?

For example, I was searching for various adjectives to go with Countess to describe the heroine of my last Regency Warrior book when I realized that the most important character this time around was the hero, and the book became The Abominable Major.  In my Regency Gothics the emphasis more often goes to "things" instead of people. Examples:  Shadows Over Greystoke Grange, The Ghosts of Rushton Court, The Blackthorne Curse, Tangled Destinies, The Demons of Fenley Marsh, The Mists of Moorhead Manor.

Why? Because in Gothics developing a sense of menace is all-important. In 3-5 words I've indicated that these stories are more eerie/suspense than tales of romance.


2.  Trial & Error.  I then sit down with a legal pad & pen and scribble down all the titles I can think of, no matter how awful or absurd. I may do this just once; I may do it several times over a period of days. Sometimes the right title leaps out at me; sometimes I continue to suffer, forcing myself to approach the problem from a different angle (as I did when I changed the title from feminine to masculine in The Abominable Major). When I have pinned my choices down to one or two . . .

3.  I go to Amazon and check the titles. And frequently find myself groaning as there are already two or three books by the titles I spent so much time choosing. Well, @#$%!  It's not that you can't have the same title, but really, who wants to be one of a crowd?

Example:  This is how my Lady Knight (a title I loved) became Florida Knight. Too many others had the same bright idea. Sigh. The same for The Art of Murder. After checking Amazon, my mystery set at the Ringling Museum in Sarasota became The Art of Evil.

4.  So . . . back to the drawing board. More scribbles. Maybe if I reverse those two words . . . Maybe I should just start from scratch. Out comes the legal pad and pen again. And yes, it's tough. Most authors complain about writing a synopsis. Which then gets boiled down to a blurb. Which, in turn, gets scrunched down to a Log Line for instant promo purposes. But getting your book down to Title size? That really is tough.

Below, I'm going to list a few more of my books and see if I can remember how they got their titles:

The Sometime Bride.  My very first. (It came out after Tarleton's Wife but was written first.) No, I don't recall the process - way back in the mid 90s - but the title was extremely apt as over seven years of the war against Napoleon, the heroine sees her husband only on rare occasions, although it is years before she realizes just how rare! So somehow I managed to say the most important point of the book in just three words.

The books that are easiest to name are the ones that emphasize a specific person:  Lady of the Lock, Lady Silence, Rebel Princess, Sorcerer's Bride, The Bastard Prince; the ladies of the Aphrodite Academy - Belle, Cecilia, Holly & Juliana. The Lady of the Lock was a girl who had been raised "lockside" by a father who engineered locks for canals. Lady Silence was a girl who did not talk.

Books like Tarleton's Wife and O'Rourke's Heiress are almost self-explanatory. Few agonies there. Steeplechase and Orange Blossoms & Mayhem were more of a challenge. In Steeplechase a young bride leads her thoughtless husband on a bumpy ride that almost ends in tragedy. My mystery (OB&M) was anchored in a wedding planning business run by a family with a history of far more daring adventures. Shadowed Paradise is a serial-killer tale, set in Florida. Its sequel, Paradise Burning, features a massive forest fire. Limbo Man, an international thriller, features a hero who has amnesia.

And as for Making Magic With Words - Advice on Writing & Editing . . .
I ran through countless possible titles with that one. I really wanted to call it Slay the Dragon, as my cover artist had found a great dragon pic, but in the end I bid fond farewell to the dragon and settled for a title that told the clear facts:  this is a "how to" book on Writing & Editing.

SUMMARY.  How do you reduce your book to 3-5 words? How do you capture a reader's attention? How do you create a title that calls out, "Read me!"?  I repeat:  titles are not my area of expertise, but I hope I've given you some helpful ideas. And the wonderful thing about the Computer Age is that you can change that title in two seconds flat. For indie authors, that means right up to the time you send it to your cover artist. Or perhaps I should say right up to the time he/she sends you the final cover copy.

Titles are important. Take your time and do it right. 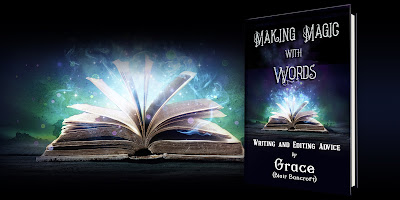