After twenty-three days on the road, we have limped back to Longwood and are trying to get back into our old routines - which is pretty difficult when moving has discombobulated everything! Though I've managed to read through and re-edit the first two chapters of my latest Regency Gothic, The Welshman's Bride, it's going to take a bit longer to reacquaint myself with the characters.

As for our trip, except for the problems inherent in coordinating travel for an extended family of eight - and Cassidy passing along a bug she supposedly was over to both sisters and her father(!) - we had a remarkably good time. (I'm hoping the girls will retain "how to negotiate the London Underground" until they're old enough to do it on their own.) Interestingly, when I was babysitting while Mom & Dad made a swift trip to Ikea the day after we got home, the movie the girls asked for was What a Girl Wants, which is chockful of the sights they had just seen in London. So I suspect something sank in!)

Our only other snag - viewing Stonehenge in the pouring rain with a temperature of 55° - after hot weather for 21 previous days. My throat is still scratchy four days after our arrival home. Naturally I'll be posting more to Mosaic Moments about our 10-country jaunt at a later date.

I wrote about Belle, Cecilia, Holly, and Juliana, girls to whom life had not been kind, because sometimes one just gets tired of sweetness and light, young women out to snag a title or even the deserving Cinderella capturing the eye of a prince. I designed the series to be open-ended, but after the success of my Regency Gothics and the necessity of finishing the last two books in my Futuristic Paranormal Blue Moon series, I suspect Juliana will be the last of The Aphrodite Academy. (I'm hoping Book 1 of the Blue Moon series, Rebel Princess, will be available early this fall, with Sorcerer's Bride to follow shortly after.)

Although Juliana is a stand-alone book, I believe you will enjoy it much more if you read about Juliana's three former students first. They are, in order:
Belle, Cecilia, and Holly. All four books are novellas. 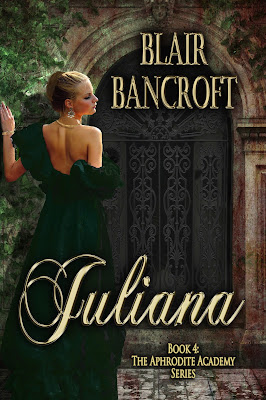 Juliana, an innocent bride, marries a charming, insouciant gentleman who promptly sets about teaching her all aspects of love, not just those generally practiced in Regency bedchambers. At some she draws the line, but when her husband adds Darius Wolfe, his man of business, to the mix, she finally learns the meaning of love. Yet happiness remains elusive. When Juliana's husband is killed in a duel, instead of being freed, she is haunted by memories of her role in ménage à trois and is unable to move forward into a brighter world. She sets up a school to provide second chances for young women who have gone astray, yet six celibate years go by with her relationship to Darius Wolfe unresolved. Even after her friends band together to help her, the possibility of a happy ending remains doubtful.