Dinosaurs in a Zoo??

Dinosaurs? An explanation can be found below the photo essay. 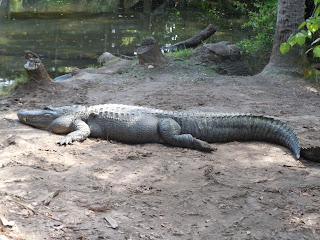 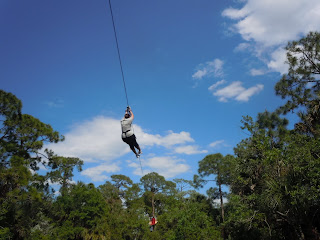 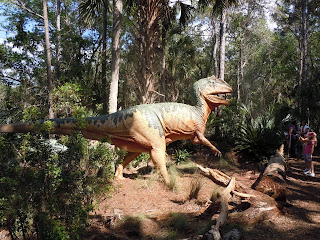 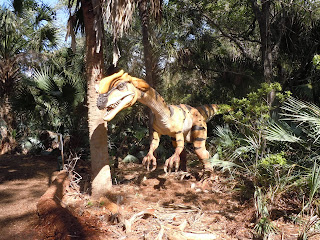 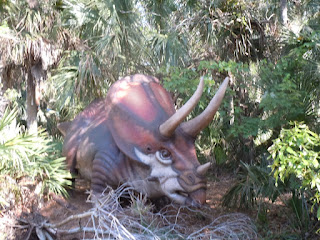 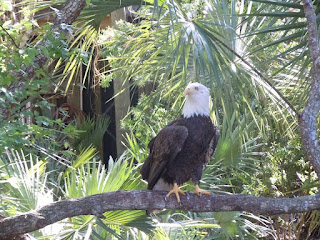 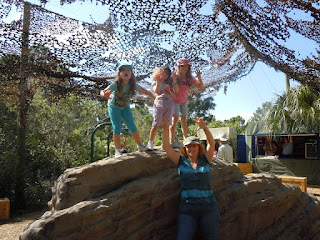 Spent a marvelous three hours at the Brevard (FL) Zoo Sunday—daughter, son-in-law & three grand-girls— all wishing we'd managed an earlier start. (By the time we got around to feeding the giraffes, they'd headed toward their barn for the night. Sigh.) 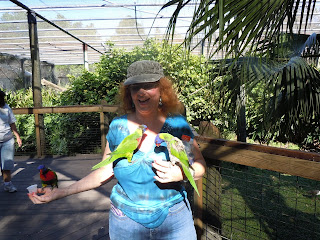 But all in all, the Brevard Zoo is an amazing place - no wonder cars were parked almost all the way to the main road. In addition to the usual array of animals, all "outdoors" in green habitats, there was a very special exhibit that will be there only through May 28, 2012. Sixteen life-size robotic dinosaurs ( not counting hatchlings), moving, roaring, a couple even spitting water, and one eating a large fish. Each carefully labeled in large letters, easy for a child to read. Grandchildren and adults alike were ecstatic. Best extra $5 above ticket price we'd ever paid.

Created, obviously at great expense, out of Houston, the dinosaurs are destined for Australia and New Zealand next, so this may be a last chance to see them in the U. S. for some time come. I cannot recommend the exhibit too highly. Above are a few highlights of our afternoon at the zoo. Believe me, those dinosaurs had all the adults thinking, "Jurassic Park"!

Coming next: Part 1 of EDIT THE BLASTED BOOK!

Thanks for stopping by. Grace
Posted by Grace at 10:33 AM No comments:

A book I was reading this week inspired me to begin a new Blog Series. Tentative title: EDIT THE BLASTED BOOK! A Handbook for Indie Authors. (Nuff said.) Before embarking on that major chore, however, here is the promised Coronation Chicken recipe, which was printed in The Orlando Sentinel, February 1, 2012. According to the article, it was created by Constance Spry, a society florist and author, and chef Rosemary Hume for Queen Elizabeth II's coronation lunch in 1953. If you like your chicken from KFC, you may find this recipe a bit challenging.

Note: This is a cold chicken recipe.

Grace note: Before following the instructions below, please note that the chicken is supposed to be poached!

1. Remove the skin from the chicken. Cut meat into small pieces. Broil until golden brown. Allow to cool.

3. Puree apricots through a sieve or with a blender. Place in a bowl; mix in mayonnaise. Add cooled sauce; mix well. Whip cream to stiff peaks; fold into the mixture. Season with salt and pepper to taste. Add more lemon juice if needed.

4. Fold in the broiled chicken pieces, coating them well with the mixture. Garnish with watercress.

~ * ~
It sounds great, but I can't quite imagine taking the time to do all that. I wonder if baby apricot puree would do . . . Heresy, I know. But if anyone tries it, please let me know.

Coming soon (I hope): the first installment of EDIT THE BLASTED BOOK!

Grace, who writes as Blair Bancroft & edits as Best Foot Forward
www.blairbancroft.com - editsbyBFF@aol.com - @blairbancroft
Posted by Grace at 11:31 AM 1 comment: 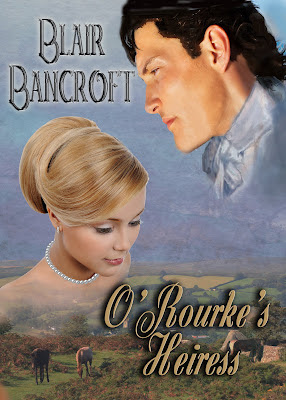 Can the daughter of a jumped-up tradesman find happiness with a handsome and charming viscount, or does her destiny lie elsewhere? Perhaps with a man who isn't trying to kill her? 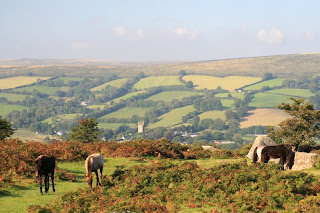 Because the Dartmoor scene used for the cover of O'Rourke's Heiress was so idyllic, my cover artists sent it to me separately so I could share it.

WARNING! O'Rourke's Heiress contains major spoilers for The Sometime Bride and Tarleton's Wife. I strongly recommend you read both those books before Heiress, which contains characters from each.
~ * ~

If you've ever wondered what happened to the young men and women who married to suit their parents (as classic fictional heros and heroines never seem to), O'Rourke's Heiress is one example of "What if?" After all, I think most of us would agree we don't always get it right the first time around, and there should be a place in Romance for those who mess up - big time!

Although Terence O'Rourke would never admit it, he loves Beth Brockman. Beth, daughter of Tobias Brockman, the Merchant Midas, has loved her foster brother, Terence, for all seventeen years of her life. Both are bastards. Both owe everything to Tobias, who has one simple goal beyond making money: he wants his only child to marry a title.

Beth's protests are ignored as Terence sacrifices his own desires so she can marry the heir to an earldom. But disillusionment begins on Beth's wedding night. She is no longer a pampered princess. Her husband is master of her fate, her money, her person, her life. He can love her, starve her, beat her, sleep with as many women as he likes. He can abandon her . . . even kill her. And live happily ever after on her munificent dowry.

Occasionally, Beth sees flashes of the charming gentleman she thought she married. As a bitter winter on Dartmoor turns to spring, she struggles to make her marriage work. But events begin to suggest her husband is a madman or a murderer. Perhaps both.

Prior to Beth's wedding, Tobias Brockman sent Terence to Louisiana, where he assuages his anguish over Beth's marriage in the arms of an ambitious Creole, who clings to him all the way back to London. Where Terence discovers his "sacrifice" was in vain—his beloved Beth has suffered beatings by her husband, topped by a series of inexplicable accidents. A dash to Dartmoor reveals that the lovely, innocent young girl Terence once knew is totally disillusioned, determined never again to allow love into her life. Terence keeps trying, but their past mistakes continue to haunt them. Happily Ever After seems impossible for this pair of star-crossed lovers, but sometimes Fate does the strangest things . . .

~ * ~
Next blog: The recipe for Coronation Chicken prepared for a luncheon prior to Queen Elizabeth's coronation way back when.

Thanks for stopping by!
Posted by Grace at 1:11 PM No comments: