Below is one of those unattributed gems that pop up on Facebook. It was titled: "The Best Argument for the Oxford Comma."

To my great joy, on Thursday evening the Lake Mary High School Symphonic Band and Wind Ensemble performed in their first concert since the beginning of the Pandemic. It was truly soul-stirring to hear even the 9th and 10th graders playing with all the aplomb of professionals. And the performance of a select group of mostly 11th and 12th graders was even more amazing. (Our Riley, a 10th grader, was part of this elite ensemble.) There were also three stunning performances by soloists on the marimba. The applause, shouts, and standing ovation were well deserved. And all but one percent ( perhaps less) of the audience accepted the responsibility of wearing masks. Here's looking forward to many more concerts, including the revival of Jazz Band.

And now . . . a bit of humor found on Facebook (also unattributed)

The Presbyterian church called a meeting to decide what to do about their squirrel infestation.  After much prayer and consideration, they concluded that the squirrels were predestined to be there, and they should not interfere with God’s divine will.

At the Baptist church, the squirrels had taken an interest in the baptistry.  The deacons met and decided to put a water-slide on the baptistry and let the squirrels drown themselves.  The squirrels liked the slide and, unfortunately, knew instinctively how to swim, so twice as many squirrels showed up the following week.

The Lutheran church decided that they were not in a position to harm any of God’s creatures.  So, they humanely trapped their squirrels and set them free near the Baptist church.  Two weeks later, the squirrels were back when the Baptists took down the water-slide.

The Episcopalians tried a much more unique path by setting out pans of whiskey around their church in an effort to kill the squirrels with alcohol poisoning.  They sadly learned how much damage a band of drunk squirrels can do.

But the Catholic church came up with a more creative strategy!  They baptized all the squirrels and made them members of the church.  Now they only see them at Christmas and Easter.

Not much was heard from the Jewish synagogue.  They took the first squirrel and circumcised him.  They haven’t seen a squirrel since.

I'd like to recommend a real "buy," particularly if you subscribe to Kindle Unlimited (where all four books are FREE). I'm really fond of my SciFi/Fantasy/Paranormal series, Blue Moon Rising. I hope you will enjoy reading it as much as I enjoyed writing it. 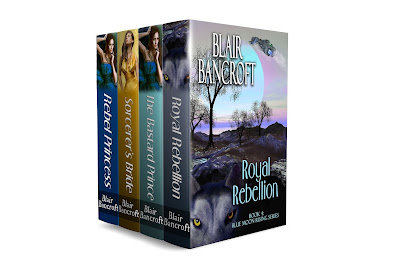 Rebel Princess, Sorcerer's Bride, The Bastard Prince, and Royal Rebellion - all in one neat little package. For a link to Amazon, click here.

At the end of Part 1, you may recall, all seemed to be well.  The three little girls and I had finally arrived home (one hour after leaving the church - usually not more than a 30-minute drive). We ate supper and were watching a movie when . . .

Mommy turned her phone back on and called to say that the concert was running longer than expected and could I please take the children home and put them to bed.  I was still nerve-wracked to the bone, but food had helped, so I only twinged slightly at the thought of putting the girls back in the car and driving three blocks.

I loaded everyone back into the SUV and arrived at their gated community a few minutes later. I reached for the gate clicker I assumed was on the visor, and . . . oh-oh.   No, the girls didn’t know where mama stashed the clicker, but they assured me I could punch in a code.  Alas, I had to tell them that the code only worked until six p.m.  After that, you have to have a clicker or someone has to be at the house to buzz you in.  ( I recalled one memorable evening when my son-in-law climbed the gate, all eight feet of it, at 1:00 a.m.)

“We can go in your car, Gramma,” said the girls. (They knew I had a clicker to get into their development.) So we turned around and headed back to my house.  But as I drove toward my house, it occurred to me that if I drove my car, we wouldn’t have the built-in garage-door opener on the SUV.  Without which I’d need a key to my daughter’s house.  And it seemed I no sooner had a key made than my daughter sends someone to borrow it.  So if I drove the girls  home in my car, we could get through the gate but might not be able to get into the house.

Believe me, at this point if I hadn’t already decided I had a few thousands words to say to my daughter when she got home, this would have been the final straw. (And since I was on the verge of brain-dead, it took a 6-year-old to find a solution.)

As we pulled into my driveway, my middle grandgirl said, “Gramma, why don’t you get the clicker out of your car?” I sat there behind the wheel and gaped.  Out of the mouths of babes!  I told the girls to stay put, unlocked my front door (as, of course, I couldn't open my garage door as I was driving my daughter's SUV), pulled the gate clicker off my visor, and back we went to my daughter’s house.  As it turned out, we didn’t use the garage opener, after all, as the 7-year-old was gung-ho to try every key on my ring to see if she could open the front door.  Which she did while the rest of us stayed in the car and watched.

She yelled for us to come in, and then proceeded to turn on the Christmas tree and the many other Christmas lights throughout the house.  A very special moment after all we’d been through.

When my daughter and her husband finally got home, the girls were in bed, their halos still shiny, and I laid out the whole tale, woe by woe.  My daughter looked at me and said, “Oh, I’ve been using the hand brake because the car keeps getting stuck in Park.”  Not that she’d told me that any more than she mentioned there was no gas.  I had, of course, been putting the car in Park all night.  Sigh.

I’m not sure I’m going to the Singing Trees next year.  The memories of 2010 may haunt me forever.