Before this shot, I didn't know it was possible to take a digital double exposure. When my son-in-law sent this to me, I could only gape and ask how he did it. His reply:  "accident."  This is my five-year-old granddaughter, Cassidy, steering a "duck" on the Charles River in Boston. Of all the youngsters on board, including two older sisters, she was the first to raise her hand when the captain asked for a volunteer! Although this photo was taken on the last day of our vacation, I felt it deserved "lead" position.

Why I took my daughter & family, plus son & significant other to Cape Cod for a week.
My father's first job out of Harvard Graduate School was principal of the high school in Wellfleet on Cape Cod. I was four. Nebraska born and raised, my father always said he took one look at the ocean and never went back. Even though a better-paying job took our family off the Cape the next year, we returned to visit every single summer until my parents finally retired to Orleans on the Cape. Since I was teaching music in Newton (near Boston) at the time, I visited them on a regular basis. Basically, Cape Cod has been a part of my life for more years than I care to admit to, and I really wanted to go back for another look.

Was it worth the effort?
Oh my, yes, and then some! We had a whale of a time. 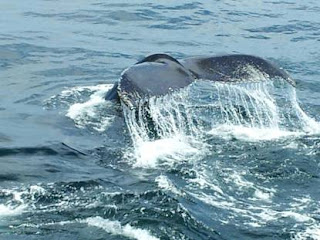 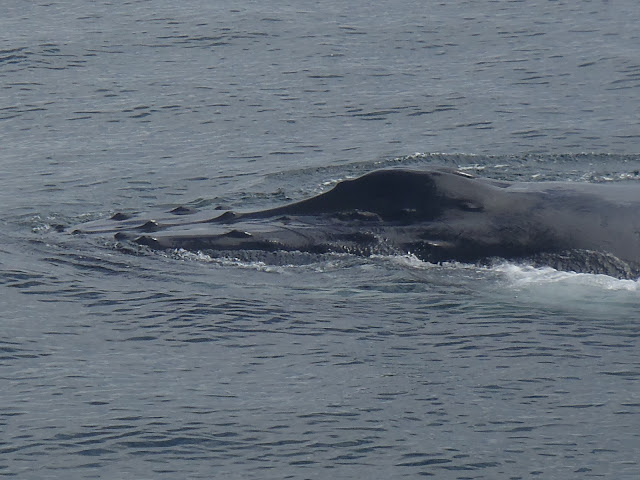 Staring at us, I swear! 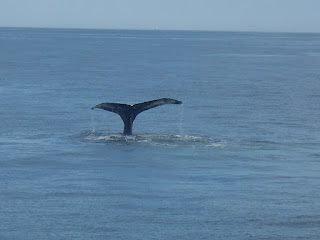 My daughter decided long before we left Orlando that she wanted to go "whale watching" on her birthday, so that's exactly what we did. (Photos are by my daughter & her husband.) I figured we'd churn around off Provincetown for 3 hours and be lucky to see one whale. We must have seen 30 or 40! A trip well worth taking. 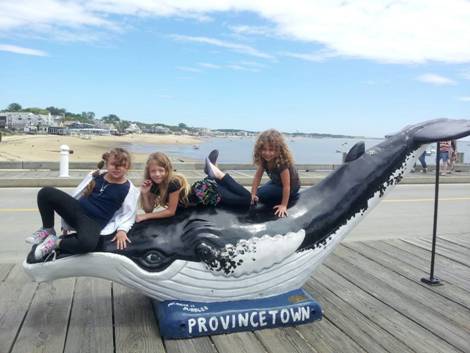 Riley, Hailey & Cassidy
On the dock on the way to the Dolphin IX for our whale excursion.

Sand dunes in Wellfleet, below: Two of my grandchildren plunging down the dunes at Cahoon's Hollow in Wellfleet (No photo by me as at the time I was trying to act as if I didn't know who those people were!) The responsible middle child, having been warned by me that dune-running was forbidden by the federal government (!) refused to join in the fun. But because I'd told them how I loved doing it when I was little (their Mommy too), there they go. And, yes, they were "shut down" shortly thereafter, though very gently, by a ranger. Our home away from home in Orleans: 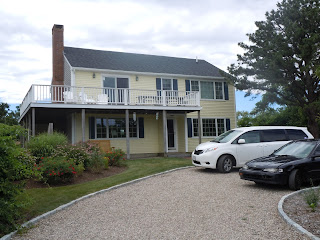 4 bedrooms, 3 living areas, 2 flatscreen TVs, deck, porch swing, wind chimes, and every amenity you could think of from Baggies and Bandaids to an enclosed outdoor shower with hot & cold water + foot shower. Modern kitchen with huge pine table for 8, two fireplaces, ceiling fans, nautical-themed photos . . . I could go on and on. And one block from Skaket Beach, where you can walk a mile out into Cape Cod Bay at low tide. Below - just a small portion of the house's elaborate landscaping. 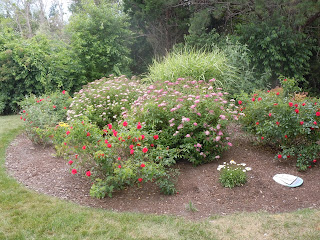 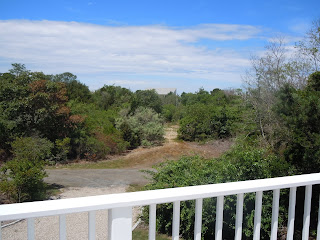 In 1979 my mother wrote a children's book for The Weekly Reader, entitled, The Ghost of Penniman House. So naturally we had to take her great- grandchildren there. Penniman House is marked by the jawbones of a great whale, which I remember seeing when I was little. (I assume it's from a whale Captain Penniman caught.) That's Cassidy again, so think 5-year-old size for comparison. 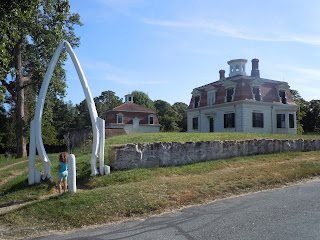 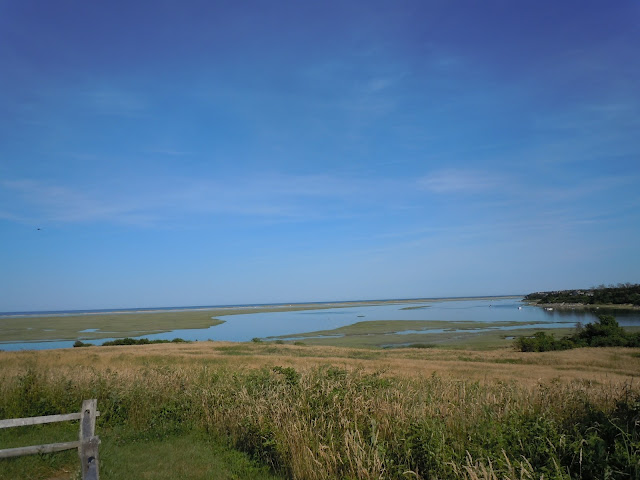 View from a hilltop just up the road from Penniman House. 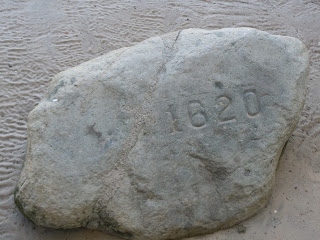 Naturally, we had to stop in Plymouth on the way back to Boston, where the family toured the replica of the Mayflower (below). 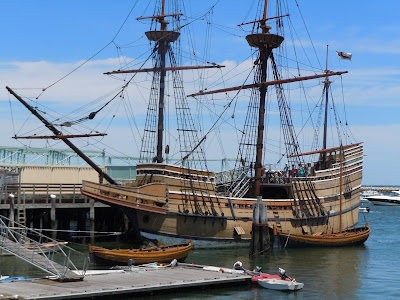 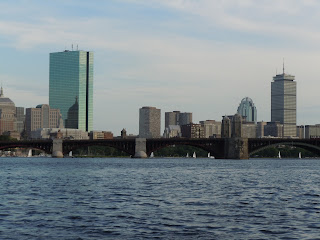 Then on to Boston for this view of the skyline from our "duck."

I'm happy to report I took the above four photos myself! 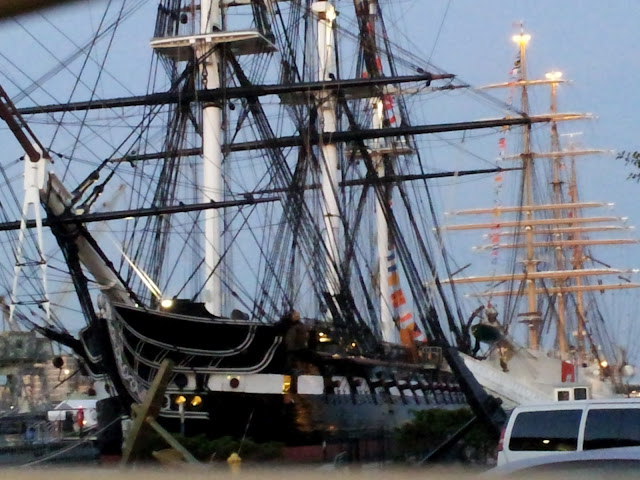 We nearly got arrested waiting for my daughter to take this photo of the Constitution (Old Ironsides), with another "tall ship" behind it, at the Charlestown Naval Yard. (Evidently, she managed to get the camera lens through a hole in the chain-link fence.) The Constitution has just been refurbished for a 200th celebration of its victory in the War of 1812. It's the oldest still-commissioned vessel in the U. S. Navy.


And back to Cape Cod's Skaket Beach for the traditional sunset photo: 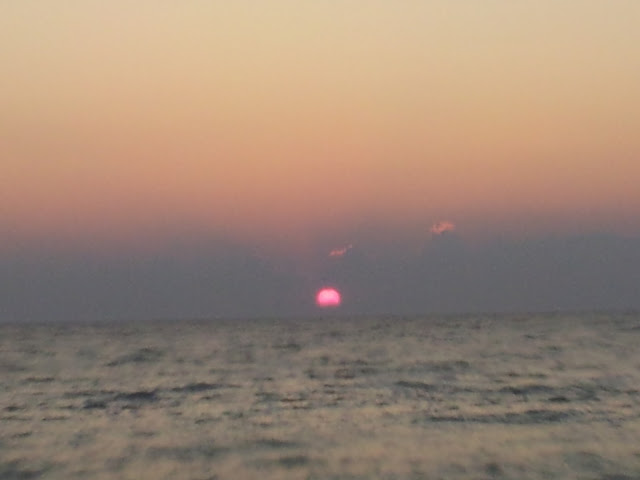 Thanks for sharing my Eight Days of Nostalgia.

Next blog: EDIT THE BLASTED BOOK, Part 6 - Anatomy of an Edit