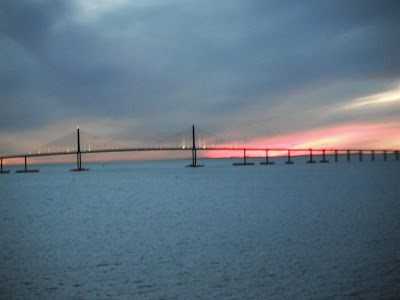 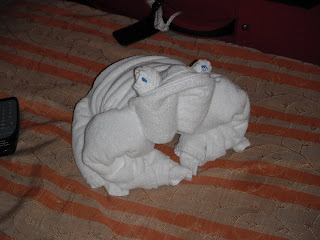 
Got back early Friday from a 5-day cruise on the Carnival Paradise with eighteen family and friends. Woo-hoo, did the restaurant tremble when they saw us coming! The greatest irony of the trip - it was organized by my daughter's real estate assistant way back in early September to celebrate her 23rd birthday. One week before the cruise, she was told there was a January opening in nursing school, she wouldn't have to wait until July. BUT if she took it, the cruise was out. So there we were, cruising the Caribbean, celebrating Maria's birthday (and enjoying our cabin stewards' towel animals), while Maria went to school. Sigh.

Cold in Tampa when we left, but after a day and a night cruising south (through rough seas), the weather in the Caymans was grand. Did a fabulous tour on the "Nautilus," a boat with the passenger seats below the waterline so we could see coral reefs, multitudes of colorful fish, and two shipwrecks (19th c.) Then off to a Turtle Farm - see photo below of me juggling a turtle. Note for those who have cruised the Bahamas: money from the 500 banks in the Caymans definitely affects the economy. The whole of Grand Cayman 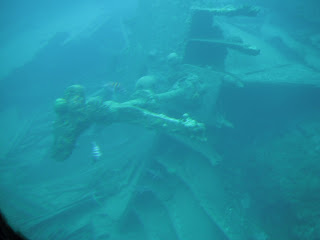 appears far more prosperous than Nassau, including many luxury hotels. The 7-mile beach, however, is available to all, with walk-throughs to beach access between the hotels, as well as several miles of open beach and parking (not yet snatched up by hotels or condos).

Next blog: a bit about our tour of the Mayan ruins in Cozumel. 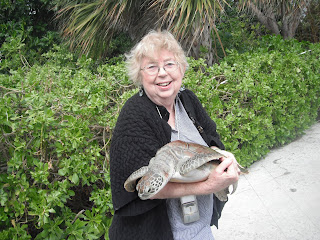 a number of characters from The Sometime Bride and Tarleton's Wife. (I did a promotion of two free days for Bride this past weekend and was amazed by the number of downloads. I'd like to think it was me, but I'm afraid it was the 0.00 price tag!

All the best, Grace
aka Blair Bancroft

Photos by David Kone
Posted by Grace at 12:44 PM No comments: 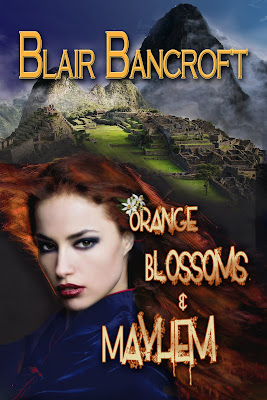 Needless to say, I'm thrilled to present Orange Blossoms & Mayhem with Delle Jacob's gorgeous cover, which so perfectly conveys both the exotic locales and the bombshell heroine. Please see description below.

~ * ~
Want to get married in a hot air balloon? Have the bride step out of a Fabergé egg? Just call Fantascapes, the Halliday family business (ironically based in a sleepy Florida resort and retirement community). Fantascapes is also the right number for hiking the Inca Trail, a chalet in Switzerland, or a luxury journey to Angkor Wat.

Grace Note: Orange Blossoms & Mayhem is my venture into Thriller mode, with a bombshell heroine, hunky heroes, and dashes of humor to lighten the mayhem. If you like your heroines truly heroic (this one saves the hero five times), this book is for you. [Please note Orange Blossoms is not part of my backlist, but a brand new, never-before-published novel.]

On another note, I have finally succumbed to Twitter. I can be found @blairbancroft. On Facebook and Linked, I post under my real name of Grace Kone.

Coming soon: O'Rourke's Heiress, a Regency Historical saga, featuring a number of the characters from Tarleton's Wife and The Sometime Bride.

May 2012 bring peace and fulfillment to you and yours!
Grace