After promising myself I'd be sure to watch the launch at 10:30 p.m. on Thursday night, I watched a movie on TV and forgot. Am still grinding my teeth. But my daughter got several good photos from her front yard. (Two posted below.) This was the third Falcon Heavy launch, all with the same booster. It contained 60 "starlink" satellites intended to improve high-speed internet communication.


For starters, another lovely, and complex, creation by a Crochet Club member: 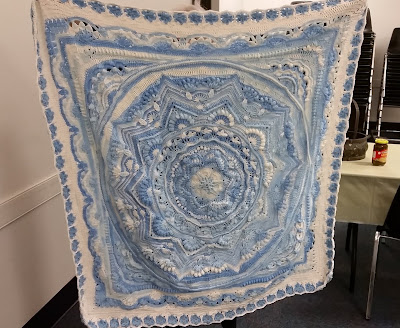 And for a video of an egret riding a gator, click here.

I read a contest entry this week which stunned me by how well it was done. (Believe me, I've seen a lot of clinkers over twenty years of being a judge.) And then, when I got down to the nitty gritty of judging, a horrid thought occurred to me:  there was an error in the manuscript so basic that it was impossible for "suspended disbelief" to work. No matter how well the manuscript was written, the author has missed a point so vital there was no way around it. And as I struggled to suggest a way to fix the problem, I also wondered how to convey this "no-no" to my blog readers.

So, first of all, what is "Suspended Disbelief"?

I admit the first examples that came to mind were movies and television programs: the world of Storybrook in Once Upon a Time, the Whitewalkers and dragons in Games of Thrones, the entire Avengers movie series. In books, I vividly recall an Historical Romance about a London rat catcher who turned out to be duke—a genuine, legitimate duke. Every SciFi and Steampunk novel, every dystopian Young Adult requires Suspended Disbelief. In Lindsay Buroker's Chain of Honor series, a boy of eighteen becomes leader of his people, even though for the first three and three-quarters of the four books he has no idea he is courageous, compassionate, wise, or talented enough in magic to be selected as ruler of his war-torn country. Yet another example:  Susan Elizabeth Philips has a First Lady running away in a beat-up RV with some of society's lesser lights.

All the above are examples of Suspended Disbelief that works. The authors have written their stories in such a way that we swallow the most improbable events whole. You could also say, we "lap up the impossible and love it."

So when does our inventiveness fail?

When you ask readers to accept something that is absolutely wrong. Something that cannot be justified by the author. The examples that most readily leap to mind are  anachronisms—a zipper in a gown in 1803; an illegitimate son inheriting an English title; a rifle in a Medieval romance, etc.

Even worse—situations where a blind person speculates about something he sees, a deaf person overhears a conversation. And then there's what was mentioned in my last blog: characters in an Historical Romance whose speech and attitudes are right out of the 21st century.

STOP, think! What did you just write?

Yes, murderers can be redeemed, hate can turn to love, but some things are truly impossible. Don't shoot yourself in the foot by being so caught up in your story that you ignore reality. Suspended Disbelief only goes so far.