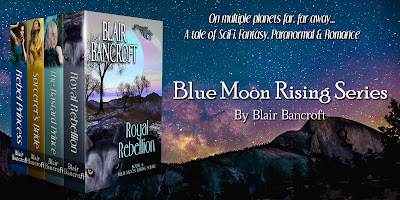 Reminder: my Blue Moon Rising series is now available as a boxed set.

Most of my rants—as I've noted while compiling the long-promised compilation of my blogs on Writing and Editing—concern blatant mistakes authors make, but today's post is more of a challenge. I can't give examples as the problem usually ranges over the whole book, and also because I would never single out any author's work as a bad example! But two books I read this week (or in one case sent to Archives around page twenty) inspired me to attempt to describe how easily an author can shoot himself/herself in the foot. Myself included.

Too Many Words (or Too Much Repetition)

This is something I've been accused of. For example, when I wrote my Blue Moon Rising series, I thought of it in a manner similar to my other books: at heart, it emphasized romance and was intended for a female audience. Imagine my surprise to discover reviews by males! And they, of course, were not charmed by all that female introspection, agony, etc. The emotions that Romance readers love. Sigh. Fortunately, most of the reviews were more favorable, but it made me more conscious of that basic need to carefully consider one's audience when sitting down to write!

On and off, as I created my latest Regency Historical (now tentatively titled The Abominable Major), I found myself wondering if I was once again indulging in that tendency to "emote." To wring all the nuances out of my main characters' heads while not having enough dialogue or action to keep things moving. This is certainly something I will have to keep in mind as I go back and edit from the top.

Regular readers may recall that I've blogged a bit on this topic before. That time, a well-known author completely ruined a book for me by dropping into a long, unbroken narrative of emotions that was not only boring and repetitious but stopped the book dead in its tracks.

So what set me off on this topic for a second time?

This past week I read a book by a relatively new author whose work I admire. (It's so rare to find a name to add to my list of favorites!) She has the history, manners, and mores of the time down pat. Her characters are well drawn and different from run-of-the-mill heroes and heroines. She actually finds a unique take on the same old, same old, romance plots. She expresses herself in lovely sentences. But this time round . . . I wanted to take her h/h and knock their heads together. (The heroine was particularly annoying.) Yes, the conflict that kept them apart was genuine and cleverly thought out. But the same points were hammered at over and over and over again (reminiscent of that old expression - "Johnny One Note"). And even though the author made an attempt to justify the reasons for this stuck record, if I'd been reading a paperback instead of my Kindle, I might have thrown it at the wall. I truly could not like the heroine. Every time the author let us look inside her head, I was appalled by what I saw there. For me, her behavior was simply too aberrant.

As I read over what I just wrote, I realize I had two problems with the book: not only too many words saying the same thing, but I could not feel the heroine's attitude was well enough justified. Nonetheless, in most ways the writing was excellent, the research outstanding, the feel for the period good. So yes, I finished the book and read another by the same author, which I thoroughly enjoyed.


Moral of this small rant: ANY author, no matter how experienced, can slip up. No matter how many books you've written, you need to be constantly watchful for that fine line between revealing your h/h's emotions and droning on ad nauseum, not moving the book forward. You also need to make sure you adequately justify any behavior that goes beyond the norm.

Ignoring the "Flavor" of an Era

I confess I did not finish the second book that inspired this week's rant. It seemed to have an intriguing plot (both in the blurb and the opening pages). The heroine had a genuine problem (if mysterious), the hero was suitably rugged. So what went wrong?

As I got past the first few pages, I began to feel uneasy. The era was Regency England, yet the manners and the dialogue were more like a 21st century American female speaking to a very nasty pirate captain (instead of a lord). I kept going, becoming more and more queasy as the heroine, supposedly a well-brought-up 19th c. lady, used language totally inappropriate for her time and position in life. And then she was treated so badly by the so-called hero that that too rang false. In short, the situations, the speech, the characterizations were simply wrong for their time and place. I ended up disliking both main characters, as well as being offended by the lack of Regency "flavor," and soon consigned the book to Archives without finishing it.

WHY? I ask. Why would anyone set a book in an historical period they knew nothing about? Sheer laziness, I suppose. But it hurts, oh how it hurts when someone does this. If you want to write about modern characters, then choose a setting in the 20th or 21st centuries. Don't fly under false colors. It might be daring if you're a privateer in the 17th century, but as an author, it's just not nice. Please do not attempt to fool readers into thinking you know what you're writing about. Regency readers, including me, are very particular about what they read. This author is now on my DO NOT READ list and will remain so forever.

After writing the above, I came across a paragraph I wrote a long time ago. I'm going to paste it below, as it covers the subject at hand so well.

Please keep in mind that if you are tempted to have either one of your two main characters do something illegal or mean, make sure you have a very good reason for it. Readers want to love the hero and heroine; they don’t want them to have feet of clay. Yes, they can both be stupid, particularly in their relationship with each other, but they’re not supposed to do something that might hurt other people, show greed, prejudice, or other negative traits. And if they do, it has to be clear that they are destined to learn from these mistakes by the end of the book. In romance, readers want characters they can admire and identify with, not characters who are being mean to their spouses, their relatives, their children, etc. Then again, secondary characters can be as venal and downright nasty as you want!

Moral of this tale:
Do your research. Write about what you know, what you've learned (through plenty of hard work and attention to detail). Do not sit down at the keyboard and simply say, "I'm going to write a Medieval today." (A Regency, Victorian, Science Fiction, Medical, etc.) A serious author puts in hours and hours learning his/her subject matter before setting Word One to the page. Do not end up with egg on your face. Steep yourself in the "flavor" of the time period you're writing about. Do not go off "half cocked," as happened in the book mentioned above.

This seems a good time to mention my other boxed set, The Aphrodite Academy series, four rather frank novellas about young women who did not have the easy lives of the young ladies we usually find in Regency novels. 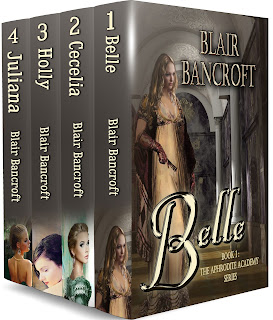 For a link to Blair's Facebook Author page,
with a whimsical Prequel to the Blue Moon Rising series,
click here.