Clearly, the following pic should have been part of last week's blog, but it just popped up this morning. 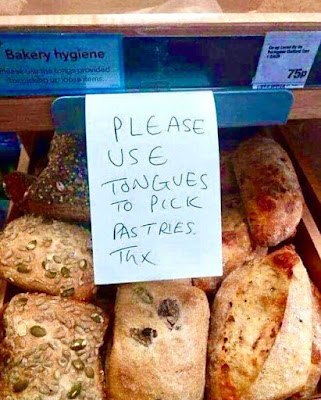 Also hot off the press . . . Wednesday, the 10th, was the first day of school in Florida.

[Hard to believe this is the same girl we saw last week,
all stiff & proper in her Police Explorers' Drill Team uniform]

I would again like to emphasize that I am merely tossing out random thoughts on how we've ended up in a world gone so awry. One would need a whole library of books to elaborate on the many ways we have strayed so far from the ideals of our religions, our ethics, and the dreams of the founding fathers of our country. But based on what I scribbled on a yellow pad a few weeks ago . . .

Although this problem has been recognized in schools for some time, as discipline in the classroom became more and more difficult, Covid seems to have pushed it into prominence. Certain groups of parents, claiming their alleged "rights," screamed: "No masks for MY child!" And some governors, like Trump-sycophant Ron DeSantis of Florida, took up the cry, their so-called "Call for Freedom" becoming more important than saving lives.

Advocating the right to die? How weird is that?

Which set me thinking about all the other "privilege" problems:

No hardships for MY child! No challenges, no bad grades - poor John or Jane might have their feelings hurt.

No learning to "tough things out." No sense of duty, no sense of responsibility for others. Just "gimmee, gimmee, gimmee"! (One example: the dramatic increase in the number of Hit & Run accidents.)

How on earth can an "entitled" upbringing result in responsible citizens?

The Increase in Violence

This topic has been debated for umpteen years, but I'd still like to add my two cents.

I listened to some pretty violent and scary stuff on the radio when I was little, and I am quite sure it had no negative effect beyond an occasional nighttime shiver. Admittedly, in the era of television, one cannot deny that old saying about a picture being worth a thousand words. Yet I am still inclined to think the increased violence in our country is due to other factors, such as

2.  Racial resentment (on both sides)

3.  Class resentment (on both sides)*

4.  Too much emphasis on "saving" criminals, too little on jailing the truly dangerous, from con artists to murderers. (Yes, there really are people who are "born bad.")

* #3 above includes that "privilege" thing we were talking about above. There is a group of people who are convinced they were born to rule the world, and they will do absolutely anything to keep interlopers out - be they black, brown, yellow, or the middle and lower class of any shade under the sun.

The Problem of Indifference - the inability to stand up & say, "Enough!"

The sad thing is, I am personally acquainted with people who have lived in comfort all their lives and who are simply unable to accept the fact that our way of life is plunging into chaos as much through our indifference as through the efforts of the arrogant, the schemers, the violent, the ignorant, and the hate-mongers. Someone has to stand up and say, "Enough!" Many, many someones. You, me, our next door neighbors, our state governments, our federal government. We have to stop screaming for the kind of Freedoms that were never included in the Constitution: the "freedom" to be selfish, the "freedom" to take but never give. The "freedom" to dislike someone solely because of the color of his/her skin. The "freedom" to dislike someone because they don't live in the same kind of neighborhood, drive the same kind of car; because they go to the "wrong" church. And then there's that supposed God-given "freedom" to hate. Etc., etc., etcetera.

And, oh yes, the "freedom" to shoot somebody for all the reasons above, or "just because."

I think what hurts me most is that I grew up in the darkness of World War II, in a time when our entire society was dedicated to keeping aggressive nations like Germany and Japan from imposing their will on others. Patriotism and a sense of responsibility to the world drove us on, but it was only after we saw the newsreels of the emaciated survivors emerging from internment camps that we fully realized we were also fighting the horror of anti-Semetism and White Supremacy espoused by Hitler and the Nazi Party.

And to any who would offer up the "hard times" of the wars we've fought since then - believe me, you have NO idea. WWII was total war. Every man under 40 in uniform, women out of the house and into the factories. There were towering wire mesh enclosures in the center of every town, gathering donations of old rubber tires and aluminum pots and pans. My mother did a weekly stint in our town's Command HQ. My father spent one night a week in a too-cold or too-hot shack on a hill, spotting airplanes in case some of them weren't friendly. (I recall helping him learn the airplane silhouettes.) We had regular Air Raid Drills in school, and once a week we brought money to buy War Bonds:  25¢ toward a $25 bond; 50¢ toward a $50 bond. There were white satin hangings in almost everyone's front window: with a blue star for a family member in the service; silver for Missing in Action; and gold for the ultimate sacrifice.

To repeat, it was TOTAL war. We did not sit back and go about our regular lives, our only involvement watching the war on TV. (There was not, of course, any TV at the time. We got our news on the radio, augmented by Newsreels when we went to the movies on the weekend.) And when the Allies finally won, we were jubilant. We'd done it! Put down Nazism forever and ever.

So now I'm going to get down off my soap box and shut up. I'm too old for active protest through anything but words, but I urge you to stand up and fight for: Respect for all; for Duty, Responsibility, and Forethought. And never forget that Hatred, Greed, and just plain Heedlessness will kill us as fast Climate Change. Nuclear War, even faster. I sometimes fear the Four Horsemen of the Apocalypse are increasing speed, bearing down on the 21st century at a gallop. And then I recall how many truly good people I know; how resilient the human spirit is, when put to the test; how many times we've risen from the ashes (of war, flood, fire, and famine) to become something better than we were. Well, now's the time to do it again - before there's nothing left to build with.