I don't know if the following photo is authentic—I suspect it's staged—but the situation is both plausible and funny. 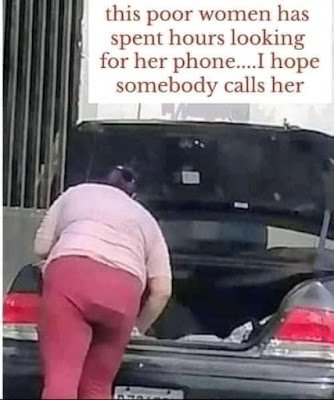 As the person who posted the photo below to Facebook said: "I don't think I know how to 'pararllel' park." 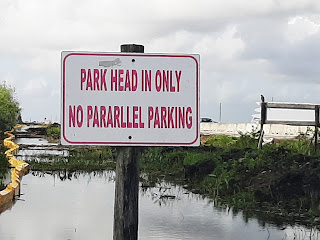 My son just sent me the cat photos below. The first, his kitten Buffy. The second a photo Elon Musk never anticipated when he sent up all those Starlink satellites. Evidently, there's a built-in heater to keep snow from accumulating on a dish that has to be pointed skyward, and the dish owner's kitties, all five of them, discovered it was a great place to hang out on  snowy day. 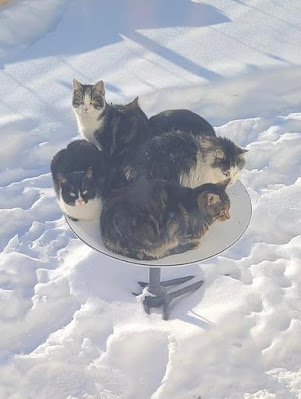 Below, another gem from my son. This appears to be an authentic page from a phonebook back in the days when you could pay for additional listings. Look closely - this is a real gem. (I saved this page as "BatmanPhonebook," but the original title was: "No spotlight needed.") 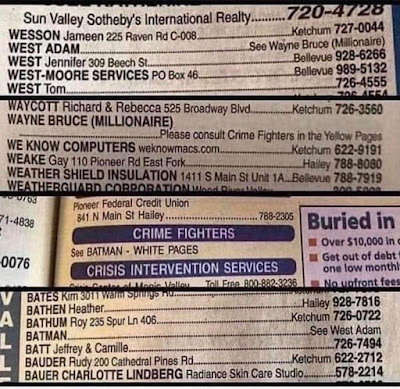 Many, many years ago—at my very first Romance Writers conference—I learned of a small seminar being given in someone's hotel room. I don't recall what it was called, but I recognized that it was something that would be helpful. The presenter was Tami Hoag, who was just beginning to make a name for herself in what was then called "Mainstream" Romance; i.e., romance considerably more in depth than the romances published by Harlequin and Silhouette.

And it was there, in that crowded hotel room, where we sprawled anywhere we could, listening to Tami's bon mots, that I learned about "layering." Yes, I'd been doing it, but I didn't know that was what it was called. And—oh joy!—I learned there were other authors who wrote from "out of the mist," creating as they went along (which necessitates going back and adding all those little details that weren't on the tip of your fingers in the first draft). It is, in fact, the only way I can write. (If I had to plot all the details ahead of time, I'd be so bored with the subject, I'd never bother to actually write it.) And—sniff, sniff—there were actually other writers like me. (Some of my faithful blog readers may recall my saying that although I tried to write in the era of typewriters, I found it impossible, as adding or deleting anything required retyping the entire manuscript!)

So what is "layering"?

Authors who practice layering are usually those who prefer to "wing" it; i.e., create their books on "a wing and a prayer" (an expression from WWII, by the way, re fighter & bomber pilots making it back home only on a wing and a prayer).

Basically, we create our main characters, have an idea of where and how we should begin, take a deep breath, and start to type. What we have at the end of our writing stint for the day is a rough first draft, which may have a lot of holes. In my case, it's often physical descriptions. Prior to writing, I have created a vague idea of my main characters' personalities, but I usually forget physical descriptions entirely. Also, I may be so immersed in writing snappy dialogue that I forget the background/setting descriptions so many readers treasure.

As the books grows, I may discover the all-important motive that was in my head never made it onto paper because, again, I was concentrating on what my characters were saying or thinking or doing, and not making it clear WHY they were doing it.

My writing needs to be spontaneous—frequently I sit down to write the scene I thought came next and find myself writing something altogether different. (I had jumped the gun in my planning, leaving out a scene necessary to the plot, to character development, etc., etc.)

All this means LAYERING—going back and adding more details, more color, more explanations, more controversy, more joy, more angst—whatever your book needs to rise above a series of ordinary declarative sentences and become a tale that will capture your readers' attention - and keep it right up to the very last page.

To illustrate what I mean, I chose a chapter of my current work-in-progress, a SciFi Adventure/Romance entitled The Crucible Kingdom. I made the following changes to the first draft of Chapter 32:

Among the inserts were bits of backstory, a more thorough look at the hero's character, and a more detailed look inside the heroine's head. As an example, here is a "before" and "after" of our heroine's thoughts:

Alora had done her homework on the rebellion.

Alora had read every scrap of information she could find about the rebellion.

Unfair. She knew her attitude was unfair. She had offered herself to Ryn. . . .

Unfair. Many Regs had joined the rebellion. Correction:  a Reg had begun the rebellion. Talryn Rigel, the rebel leader, was distantly related to Emperor Darroch himself. His father, retired Admiral of the Fleet Vander Rigel, had died for the rebellion. Admiral Rand Kamal, designated heir to the Empire, had turned his back on the throne. Captain Alek Rybolt had gone over to the rebels, taking the Reg's newest battlecruiser and crew with him. The list of those the Empire called deserters or traitors was long. Ryn was in good company. If only she could forget that the Regs considered themselves the Master Race. And, let's face it, who had ended up on the throne? A Reg. With Rand Kamal, another Reg, heading the efforts to bring independence to the star systems that once comprised the Empire.
Supposedly. Who could really trust a Reg?
Alora's face crumpled into a grimace. She had offered herself to Ryn. . . .
* * *
The revisions I made to Chapter 32—whether a single word or a whole paragraph—are just the beginning. When I finish Ch. 35, I will re-edit 30-35. And when I've written the final paragraph, I will re-edit from the top at least twice, constantly tweaking my words in an attempt to make it better. Among the many questions I must ask myself:  have I kept my characters consistent as well as interesting? Should I have placed more emphasis on the heroine's doubts about sleeping with the enemy? Do I need better explanations to help readers "suspend disbelief" in what is admittedly more fantasy than science fiction? Have I belabored some points and need to wield the Delete Key? And most of all, have I made my characters likable, even when they're being difficult?
As I've been saying for more years than I care to remember:  Edit, edit, edit, and edit again, until your work is clear, colorful, and full of characters and events people want to read about. Demand the best of yourself. Never settle for "good enough."