Authors, in particular, will enjoy the list below, though the cleverness can be admired by all. (I would suggest, however, that the title should be BOOK REVIEWS - GLOSSARY OF TERMS.)

Over the many years of this blog, I frequently punctuated my advice on Writing and Editing with rants about problems I encountered in my own work and in books by others; on occasion, about problems that cropped up in the vast number of writing contests I judged. The rant below is from 2016, but the comments are timeless. Any author, including the best and most experienced, can go astray. For example, since I began writing in the early 90s, most of the editing of my own work consisted of adding layers—more descriptions, more colorful detail, more motivation, etc. Yet, lately, I find I have a tendency to obscure the impact of a sentence in too many words, and I find myself deleting instead of adding details. After fifty books, you'd think I'd know better, but  . . .

Which is the entire point of the article below. Newbies may make more mistakes, but every author has to stay eagle-eyed, keep himself/herself on track. No Running Off at the Keyboard. Pertinent details are good. Throwing in everything but the kitchen sink is not the answer to good writing. If you don't put your readers to sleep, you'll send them fleeing to Netflix or Acorn; perhaps even to yet another episode of NCIS! If you'll pardon an oldie but goody, STAY ON POINT! Whoever first said, "Less is More" knew what they were talking about.

RUNNING OFF AT THE KEYBOARD

Rant time again. I watched a perfectly good book go downhill fast this week as it went from a fine story of love and suspense to too much repetition, too many ponderous details, and a plot that belabored its denouement to the point of extinction. And it's not only indie authors without adequate content editing who are making this mistake. One of my all-time favorite authors, print-published by a major publisher, is also guilty of similar errors in her most recent works. In her case, perhaps her editor thought she was so well-known, her readers would swallow whatever she wrote. Well, this reader didn't. I flipped through the last sixty to eighty pages of her last two books just the way I did with the indie book I just finished.

But how to explain the fix needed? That's a tough one. Even as an experienced editor, as I read the book, I asked myself, "What would I tell this author to cut? How can I explain she's beating a dead horse, that a book has to keep moving forward? Once the action plot has been resolved, the villain exposed or the book's major challenge resolved, then it's time to settle the romance and move into Happily Ever After. In the book that set me off on my rant, more than three-quarters of the book was a gripping story, unique and well told. And then it began to dither, evidently trying to be a 100,000-word book when 80,000 would have been enough. Similar scenes were repeated over and over, the story going nowhere. Details that had previously enhanced the story now seemed to bog down the pace, just when it should be picking up, moving toward a conclusion. Emotion that originally captivated now poured off the pages in a flood, repetitive, unproductive. Signifying nothing. What was exciting became boring as the same old plot points were flogged across the page, again and again.

Stories must constantly move forward. The hero and heroine solving problems, discovering new ones. Wading through the intricacies of a relationship. Floundering, moving on. The dialogue as fresh and innovative on page 250 as it was on page 25. But the writer has to be able to sense when the story needs winding up. When it's time to build toward the big action finale, after which the story should quickly ease into a resolution of the love story. (And, yes, it's always in that order. That's one of the unbending "rules" of romance.)

Going back for a moment to word count—never, ever, take a story that can be told, and told well, in 80,000 words and try to "pad" it to 100,000. Your readers' eyes will glaze, guaranteed! If you absolutely, positively believe your book must be 100,000 words, then you need to add more action, sub-plots, and secondary characters to sustain 100,000 words.  As previously stated, it's deadly to pad a story by finding new words to say the same thing twenty times over! So . . .

1.  Do not fall in love with your own words, spewing them out in an endless repetitive stream.

2.  Do not make the mistake of thinking that just because you write well, with emotion, color, and clever dialogue, you can get away with repeating yourself. Say what you have to say, say it well, then let go. Your readers are busy people, bright people. Don't waste their time belaboring a point.

3.  Do not reveal the villain (or whatever major revelation is the climax of your tale), then spend fifty-plus pages on a sub-plot with only an occasional vague reference to your book's main storyline.

4.  Do not write endless pages of emotion-filled rhetoric, which end up overwhelming and destroying what might have been a climactic moment. A moment now drowned under an avalanche of histrionics.

5.  Instead, write that Big Moment for all its worth. Pull out all the stops. Action, details, color, emotion. Wring every ounce of drama out of it. Then LET IT GO!  Move on to the quiet moments that come after—the relief, the explanations.

6.  And then comes that absolute "must" (in Romance, that is)—the resolution of conflict between the hero and heroine (with optional sex scene and/or glimpse of the future).

Grace note:  There are many nuances to the above, but I hope you get the gist of it. "Running off at the Keyboard" is a kiss of death. Don't fall in love with sound of your own voice. See your work as others see it. Tell readers what they need to know, tell it well, then "hands off!" Enough is enough, and any other cliché you can think of to keep you from turning a lean, mean, fighting machine into a candidate for Extreme Weight Loss.

To my astonishment, Tarleton's Wife sold almost as many copies this month as The Ghosts of Rushton Court and The Vicar's Daughter, two of my most popular Regency Gothics. Why is that astonishing? Because Tarleton's Wife was first published in December 1999, exactly 22 years ago! If you haven't read it ... 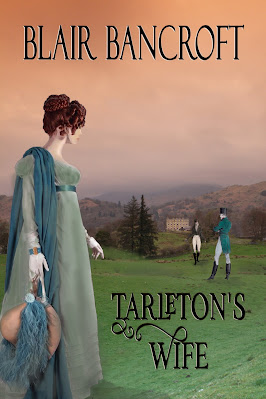