Sci Fi Between the Cracks

SCI FI BETWEEN THE CRACKS

Ever since I began my Blue Moon Rising series, way back in April 2013, I've been trying to figure out what sub-genre of Science Fiction I'm writing. And sure enough, at an RWA conference I heard one of my favorite Sci Fi authors, Linnea Sinclair, expound on this subject, and she was pretty adamant about it. In short form:  if you write fiction set in the future, thoroughly grounded in scientific knowledge and correct technical details, with emphasis on the story-line, you are writing Sci Fi. If you are writing fiction set in the future, emphasizing romance and hot sex, you are writing the sub-genre called Futuristic. And if you are writing anything in between, you are not going to make any money at it!

Which, alas, would explain why my Regencies make money and my peculiar mix of Sci Fi, Fantasy, and Paranormal doesn't. Sigh.

Then again, I write for the love of writing. For the love of writing what I want to write. And I truly loved creating the planets, people, and customs of the Nebulon Sector in a Quadrant of our galaxy just waiting to be discovered. And, fortunately, I keep pages and pages of notes on Government, Religion, Transportation, Warships, vocabulary, etc., etc., because after finishing Gothic #10, The Secrets of Stonebridge Castle, I was drawn back into the World of Blue Moon and could not have managed without all those reference materials.

So why don't my books fit either the Sci Fi or Futuristic mold? I freely admit to lacking the scientific or technical knowledge necessary to qualify as a true Sci Fi author. Compete with Heinlein, Azimov, and Clarke? Are you kidding? Today's Sci Fi authors as well. (Linnea Sinclair's tech details, for example, are truly impressive.) So scratch that one.

And although Romance plays a strong role in my stories—I believe I once counted 20+ romances over the four books of the Blue Moon series—I do not include sex in moment by moment, heavy-breathing detail. Romance, yes; details, no.

So what do I write? Stories set in a future time, with heavy overtones of the paranormal—from psychic gifts to sorcery to shapeshifting (and yes, there's even a werewolf). Stories with a lot of hopefully clever badinage, plus action and adventure. And oh—did I forget to mention?—I write Sci Fi for females, not Sci Fi designed to cater to male tastes. Although I delve into the heads of my male characters, female points of view predominate. Female sensitivity, worries, fears, and feelings. (All things males tend to shun like the plague.) I recall being astounded by a review of Rebel Princess that was critical of the amount of "feelings," and I realized that as a long-time Romance author, it had never even occurred to me that a male might read my book.

Which is why, as I work my way through Crucible Kingdom, a spin-off of the Blue Moon series, I made an effort to pin down the sub-genre I'm writing so both male and female readers can have a better idea of what they'd find in a Blair Bancroft novel set in the future.

Future Fantasy/Paranormal probably covers it best, but that isn't a sub-genre recognized by anybody. (Great sigh.) All I can say is, if you want Romance and Adventure set in a complex and colorful world in our own galaxy (though far in the future) and without a lot of time spent in the bedroom, my Blue Moon books are it.

The world of Blue Moon should also appeal to those who prefer Historical tales, as it contains kings, queens, princesses, and one of the most unusual princes to be found in either fact or fiction. There's a classic rebellion, if on a much wider scale than a single kingdom, and in my work-in-progress, the fight is against a Curse that threatens an entire planet. So take a chance, read an "Historical" novel set a couple thousand years in the future.

Special note, particularly to those who care about editing:  I am re-reading the entire series so hopefully in my current book, I won't make any mistakes in the world I created for Blue Moon Rising. But, oh dear, I was horrified by the errors I found in Rebel Princess. Until I finally remembered that I did not do the final edit! It was a product of the Kindle Scout program. Sigh. I made a list and will be fixing all those typos soon. Sorry about that.

The four books of the Blue Moon Rising series are available as individual novels through most online vendors. In order:  Rebel Princess, Sorcerer's Bride, The Bastard Prince, Royal Rebellion. 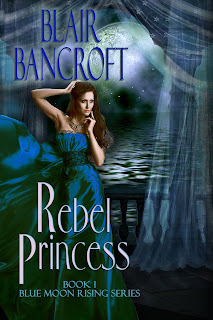 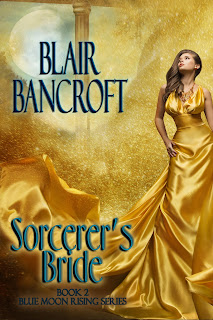 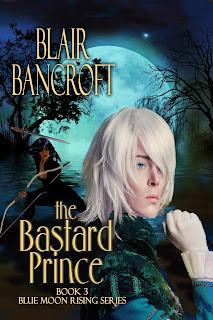 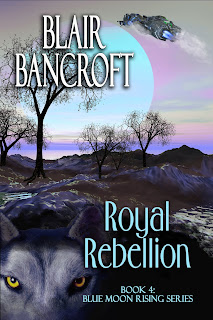 A boxed set of all four books is available on Amazon, free to Kindle Unlimited subscribers, for purchase by those who do not. For a link to the boxed set, click here.