The credit for the amazing pic below could be a little off as my Cyrillic is definitely rusty. But since the photographer's name was in Russian, I named the photo "Russian Reflections."  Credit:  Yordanka Marinova 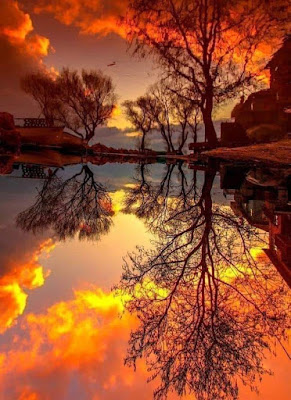 Lo, these many years ago—January 2011—I wrote my very first blog, the tale of attempting to drive my grandchildren from one side of Orlando to the other in someone else's car. It was a long enough—and hair-raising enough—tale to require two parts. A nightmare that is funny only in retrospect. It is also a tale that deserves repetition every once in a while—if for no other reason than to advise:  Do Not Attempt This in Your Family! So below, please find Part I.

Grace note:  Many of you have seen photos of my currently teenage grandchildren. At the time of this story, Hailey, the oldest, was seven.

A HARROWING TALE FROM DECEMBER 2010

My daughter is a blonde.  She is also CEO of a Real Estate Investment company.  This does not mean she does not have blonde moments.

Each Christmas my daughter and her husband take the extended family (about fifteen relatives and employees) to First Baptist Orlando’s Singing Christmas Trees, a truly superb presentation in a church that seats about 5000.  This year, my son-in-law also bought tickets on the same night for a concert in downtown Orlando.  So it was arranged that I would drive their three girls, ages 4, 6 & 7, home.  Sounds simple, right?  I even had help from others in the group to get all three little ones into my daughter’s SUV through the crush of 5000 people attempting to leave at the same time.  So far, so good.

By the time the girls were settled into their seat belts, there weren’t many cars left in the lot.  I buckled up, started the engine . . . and the car didn’t move.  I tried again.  No movement.  My daughter had set the hand brake in flat-as-a-pancake Florida?  I looked where the hand brake is on my car.  Nothing.  I looked where the brake was on my old car.  Nothing.  It was, by the way, nearly pitch black in the parking lot.  The 7-year-old put on the overhead light for me, but I still couldn’t see any hand brake.

I got out of the car and called to the one couple still walking toward their car.  They kindly came over, but they too could not find the hand brake.  By this time people were getting into the car in front of me.  We had a five-way consultation, the two couples and I, and the husband of the new couple gave it a try.  Took him about ten seconds, while the rest of us stood by, red-faced.  I like to think he was more familiar with Hyundai SUVs than I was.  With profuse thanks to all, I climbed in.  At last we could go home.

Figuring the couple who had been parked in front of me knew the way out better than I did, I followed them.   Which took us out a different way than we’d come in.  (Oops.)  No problem, just turn right and right and . . . except in all the traffic I ended up in a Left Turn Only lane.  (Double oops.)  After two or three blocks I figured I’d better make another right and right and hopefully end up on the road I should have been on in the first place.  Except . . .

We were instantly in a residential area, and that’s when I had time to glance at the dashboard and notice the Gas Light was on.  Houses, houses everywhere, and not a sign of a thoroughfare with a gas station.  And at that dire point, the 7-year-old said, “Gramma, do you know where we are?”

Uh, no.  But of course I didn’t say so.  I just kept doubling back until I saw—oh, joy—a stoplight.  And at the intersection, a GAS STATION.  Before pulling up to the pump, I tried calling both my daughter and my son-in-law.  I was not happy!  Lucky them, their phones were off.  They were enjoying their concert at the new Amway Arena.

The children, fortunately, knew which side the gas tank was on, so we managed to pull up with the pump on the correct side.  I popped out, stuck in my credit card, and the silly machine wanted to know if it was a debit card.  When I said no, it cancelled the transaction.  I tried again.  Same result.  To say my blood pressure was soaring would be putting it mildly.  There I was with three small children in the car, and I had to go INSIDE.  Fortunately, we were right in front of the door.  I told the children to stay put and dashed inside, where the attendant managed the transaction while I kept looking out the glass door.

Put ten dollars worth of gas in my daughter’s car and headed out, the children completely angelic or I might have lost myself along with the car.  We did a couple more turns, looking for lots of lights signaling a major road.  And there it was.  Kirkman, the road that runs past Universal Studios.  I was so turned around by this time that I simply chose a direction, knowing either north or south would lead me to a major east-west road that would take us home.  And, sure enough, in less than a mile there it was, the 408, Orlando’s East-West Expressway.  Yay, hurray!