Birth of a Book

I was planning to debut The Ghosts of Rushton Court before the end of the year, but somehow the holiday season doesn't seem the right time for a ghost story (Dickens excepted). But today I'm offering a peek at the contest I intend to run when Ghosts goes live. I have composed a list of questions about the book, which I will post here. The winner will have the choice of one of two handmade bargello purses. The second purse will go to the runner-up. Both purses are large enough to accommodate most cell phones. And yes, I designed and made each purse myself. Here's a peek at one of them. 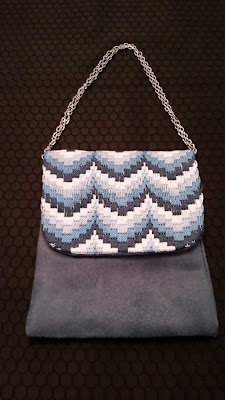 BIRTH OF A BOOK

As I enter final edits for a book, I can never keep my mind from leaping forward to the next. And this time was no exception, even though the edits for The Ghosts of Rushton Court were more challenging than usual. (The witches in The Blackthorne Curse are as close as I've ever come to the supernatural.) So it seemed a good time to make some notes recording how the "new book" process works—at least for me. And also, the topic blends well with last week's comments about writing books "out of the mist."

What comes first?
Keeping in mind that every author must find his/her own path, here is how it happened for my next, as yet untitled, book.

1. Genre. Since my Regencies are my best sellers, and The Ghosts of Rushton Court is my seventh Regency Gothic, I decided my next book should be a Regency Historical; more specifically, Book 6 in my Regency Warrior series.

2.  Primary Characters. For me, characters are always the most important item in crafting a book. So the big question was: create new characters or go with the two people I set up for their own book in The Lady Takes a Risk? Not that I could remember their names, so I had to find my Character List for Lady and frown over it a while. Did I want to take on the challenge of a disabled hero? But, oh wow, I loved the name I had given the Russian countess. That grabbed me, sucked me in. Yes, it would be fun, as well as a challenge, to contrive a match between two such disparate characters.

3.  Secondary Characters.  No problem, I had a whole slew of those from previous Regency Warrior books, including Terence O'Rourke who was neglected in The Lady Takes a Risk and Jack Harding, both of whom were still unmarried in 1817. Ah ha! Now that offers some possible interesting twists on the Plot.

4. Plot.  Well, let's face it, I'm an "out of the mist" author. All I know about this plot is that it's going to be darker than most of my books. My countess is attempting to survive in London by gaming, she is being stalked, and a whole bunch of would-be heroes come to her rescue. Beyond that . . . well, I may not start conjuring anything of substance until after I write the opening scenes. Something will turn up—it always does.

5. Setting. This was decided when I chose to use the Russian countess from The Lady Takes a Risk. At the end of the book, Lady Amelie sponsors the Countess Alexandrova into London society in order to get rid of the woman who had an eye on her husband! So London was a given.

6. Conflict. In addition to the conflicts found in the overall Plot (nonexistent as yet), the primary characters must have both Internal and External conflict. In other words, they must have conflicts that affect them alone. As an example of Internal Conflict, Major Randolph has grave doubts about any woman, let alone a woman of the countess's beauty and sophistication, being attracted to a man with one leg. External conflict refers to outside problems: the countess's stalker, for example. So I had at least a start on the requisite Conflict.

7. Research. I may have been writing Regencies for more than twenty years, but except for a scene here and there, my London-set books have been few and far between. I will have to renew a good deal of my knowledge, from the sights and sounds of the city to the ton's favorite play grounds, including the details of gaming of the period. (All things previously researched in depth but which are now only vague memories. Alas.)

Summary.
That is all I have at the moment: a genre, the names of the Hero and Heroine and of characters from previous Regency Warrior books. An idea for at least one villain. A setting, and a start on Internal and External conflicts. But over the next few weeks, holiday or not, ideas will begin to gel, and hopefully, come January, the opening scene will roll off my fingertips, and after that, Regency Warrior 6 will be off and running.

Please don't forget my "holiday" books: A Lady Learns to Love and Mistletoe Moment. Both are tales of redemption for people very much in need of a second chance. They can be found on Amazon, Smashwords, Barnes & Noble, Kobo, and other online vendors.