Pythons have found a new way to menace their non-native habitat in South Florida. Late in 2016 a 9-foot Burmese python was spotted wrapped around part of a platform more than a half mile offshore in Biscayne Bay. The sighting was a first and according to an article in the Orlando Sentinel (Jenny Staletovich, Jan. 2, 2017), "another worrisome sign that the state's out-of-control pythons are getting more adept at inhabiting the state's salty fringes. In September, state wildlife biologists confirmed for the first time that the snakes are now breeding in the Keys."

The article goes on to say that scientists suspect that at least some of the adult snakes that started breeding in Key Largo swam there [from the Everglades]. "It also means that snakes could make their way to islands inhabited by birds or other small mammals and occasional turtle nests."

". . . . Since the snakes became established around 2000, biologists still have no reliable way to control them, an effort complicated by the inability consistently track them. The snakes are perfectly camouflaged for the marshes and mangroves, which are equally inhospitable to human hunters."

Grace note: Selfishly, I'm delighted the pythons are moving south, not north! I can only hope the owners who dumped those snakes know what an ecological disaster they've caused.

Long ago—and far away in the suburban hinterlands of East Orlando—I conceived the idea for a book about as far away from the Regency era (for which I was known) as I could get. At the time I thought of it as SyFy with Romance, and only after it was nearly done did I decide it was best described as "Futuristic Paranormal."

There was another problem. I had created so many characters and so much plot there was no way I was finishing the story in one book. I informed my then-publisher that three ought to do it - we even named them. But as I got toward the end of Book 2 (Sorcerer's Bride), it was a case of Oh-oh, not going to make it. And, besides, my voiceless teen had become such a strong character in his own right that he needed his own book (Book 3 - The Bastard Prince).  Leaving Royal Rebellion for the final confrontation and wrap-up as Book 4. Hopefully. As I finished K'kadi's book, I began to see the light at the end of the tunnel, but who knows . . . There's many a slip between the brain, the keyboard, and the final denouement.

For those who have read Rebel Princess, the story of the girl known as Kass Kiolani, Sorcerer's Bride is the tale of her sheltered younger sister, now Psyclid's Princess Royal, who must learn to fight a rebellion and who does not get the privilege of marrying a man who loves her. Below please find the cover and blurb for Sorcerer's Bride, which went live on Amazon Kindle on Thursday, January 6, 2017. 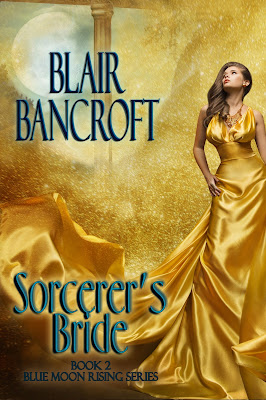 Rebellion, mind tricks, and tangled love on a planet far, far away.

Princess M'lani of the planet Psyclid, where almost everyone but M'lani is gifted with some kind of psychic ability, has agreed to marry Jagan Mondragon, the Sorcerer Prime. Jagan fled Psyclid when it was invaded by the Regulon Empire, but has now returned, supposedly to lead his people in rebellion against the occupation. But he's been dragging his feet about it, and when he finally shows up, he has his mistress with him. If that weren't enough of a problem, M'lani develops a not-so-welcome psychic gift, and then there's that prickly long-time rebel leader, T'kal Killiri (who did not flee Psyclid at the first sign of the Regs), and the antics of M'lani's younger brother, K'kadi, who speaks only through illusions.

On Blue Moon, one of Psyclid's three moons, M'lani's older sister and her husband, Tal Rigel, continue to plot a massive rebellion against the Regs, but freedom for the obscure, peace-loving planet of Psyclid seems a long way away.

For a link to Sorcerer's Bride on Amazon, please click here.

For a brochure for Grace's editing service, Best Foot Forward, click here.
Posted by Grace at 8:23 AM