My daughter didn't re-post this video from 2012 (in Gatlinburg, Tennessee) until after my last Mosaic Moments. So please enjoy a holiday treat, which is just as pretty after Christmas as before. For Susie Reale singing "Have a Merry Little Christmas" against a backdrop of the mountains of Tennessee,  click here.

On a more somber note, somewhere over the last few decades we seem to have lost the concept of honor - particularly in this year of 2016. So when I saw the word "honor" in the Orlando Sentinel (12/29/16), I felt these few sentences were worth passing on. [Every Thursday the Sentinel publishes a Spotlight featuring "Champ" and "Chump." I read it faithfully, as it's good to know who's doing good deeds in the state and who's being an idiot. This was today's "Champ." (We won't bother with the Chump.)]

Bob Hansell:  Next week's retirement for Osceola County's three-term sheriff will cap his 40-year career with the agency. He joined at 18, rose through the ranks to captain, and commanded the agency's SWAT team. Along the way, he earned a reputation for leadership and integrity. In 2004, amid discontent in the agency's ranks, Hansell took a risk and quit so he could challenge then-Sheriff Charlie Aycock. Voters rewarded Hansell with a 12-point victory. In 2008 and again in 2012, he easily won re-election over write-in candidates. [Grace note: this indicates that no one would run against him, knowing he was unbeatable.] He'll be especially missed among his peers in law enforcement. One told the Sentinel, "He is one of the most honorable men that I have ever worked with in my career."

The "cartoon" below was also in Thursday's Orlando Sentinel. No explanation needed, except perhaps to say that it was drawn before Carrie Fisher's death was compounded by that of her mother, Debbie Reynolds. 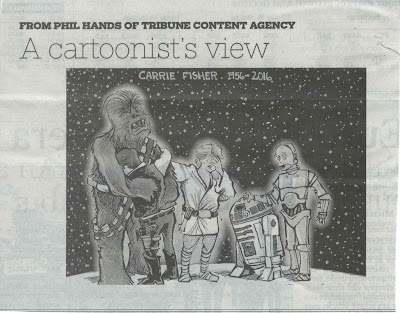 I've harped on this theme before, but whether you're swamped with distractions or suffering from classic writer's block, you should just keep writing. That's what I did the week before Christmas. Yes, I probably should have given up any attempt at creativity during that period, but I'd just started a new book, and it was ringing in my head, so . . .

All went well until that final ten days, which saw not only holiday preparations but a massive amount of musical events. If I wasn't singing myself, I was watching the grandchildren follow in the family musical footsteps. So no wonder when I sat down on December 26 to look at Chapter 5 (which for me is hardcopy with a legal pad, pen, and pencil at the ready) I found it appalling. As you've heard me say, my first drafts can be little more than shorthand for what I had in mind, but this!

There's no way to present the deletions and keep the chapter legible, so I'll just put the editing additions in red, so you can see what I did to salvage my Christmas disaster. (At least I hope I did.) The point, as always, is to emphasize that you, too, can do this. You can read over what you wrote and make it better, even if the first time was but a gleam in the eye of what you intended. Self-editing is all important. READ WHAT YOU WROTE, THEN MAKE IT BETTER.

Excerpts from The Lady Takes a Risk, Chapter 5:

Marcus blew out his candle but left the one on the small bedside table still alight. He wanted to see his wife, though he suspected she would soon cut short his enjoyment of the vision before him (as a properly brought up virgin should.) The bed was broad, and she had thoughtfully positioned herself on the side away from the door that connected their rooms . . .

Inwardly, Marcus mocked himself. Did she think him a reluctant lover, doing his duty? Fulfilling the agreement they'd made? Did she have no idea how intriguing he found her? How long it had been since he'd held a woman in his arms?

Despite knowing he'd been married, she probably thought him a Don Juan who had left behind a string of women panting for him on the continent, when, in fact, he'd put all that behind him when Susan and little Julian died. He hadn't so much as looked longingly at a woman until nigh onto a fortnight after coming to Kirkwood Farm. In the midst of struggling to replace a broken hops pole, he'd paused to wipe sweat from his eyes, and there she was: this magnificent creature in a green velvet habit slowing her black gelding to a leisurely walk, making no effort to hide her interest in what he and his men were doing.

..............................
And, incredibly, by some miracle here he was, sitting on the edge of the lady's bed in his nightshirt, his manhood a half-mast because he had so many doubts. Doubts about himself after that fatal charge at Waterloo, doubts about plunging a duke's daughter into the maelstrom of Kirkwood Farm. Doubts about betraying his beloved Susan by taking a second wife.

Why had he survived the war when she and their child had not? When so very many had not. Why should he be gifted with a duke's daughter when he had so frequently come close to being the toy soldier she had accused him of? Marcus Trevor, commanding officer of "The Prince's Dolls"—now there was a name to make a proper soldier blush!
...............................
Colonel Marcus Granville Sherbrooke, commander of a regiment of sons of England's most noble houses, mucking about in a hops field. He was sorry his father hadn't passed by that day. Or any of the many days afterward as he and his "pretty boys" learned how to grow hops. Not grapes to be fermented for the superior palettes of noblemen, but hops for beer for the masses.

The irony was topped only by his marrying exactly the woman he would have been expected to marry in his former life.

If he were particularly fortunate.

Idly, an action rearing its head from his past, he wound a strand of her hair around his finger. Lifting his gaze,he studied her face—the face struggling so hard not to show anxiety. "Well, my lady, it seems you have joined me in taking a plunge down in the world. Frankly, I could use your support. Tell me, Amelie, can we be friends?" Dear Lord, even in the flicker of the one rapidly guttering candle, he could see her soften, feel her silent inner sigh. He'd done it. He'd said the right thing. And suddenly he could see her through the eyes of a lover. Radiantly beautiful.
...........................

Grace Note: the remainder of the chapter is almost as heavily revised as the above.  So no matter how hectic, depressing, or utterly impossible the circumstances, hang in there. Keep writing. Fix it later when the bright sunshine of another day shows you the way.