Last year I did not put up my Christmas tree - it remained bagged-up in my garage as my treasured box of ornaments could not be found in my son-in-law's warehouse, where we store our Christmas stuff. But, fortunately, he moved the contents of his warehouse to Longwood this year, and lo & behold, my lifetime collection of  ornaments turned up. The night before this photo was taken, the pieces of the tree had just come out of two years of being bagged—the lights not connected, the branches all askew. But while I was reading the morning paper, it acquired its first ornament. (I have grave doubts about some of fragile ornaments when the tree is finally decorated. And yes, this is Squeak's first Christmas. She is snoozing in my lap as I type this.) 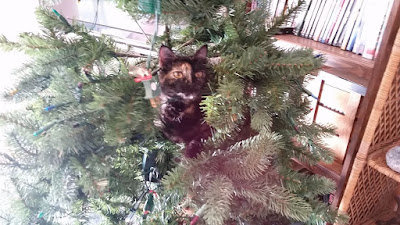 Over the past two weeks, our family has been swamped by Christmas musical performances—and all the rehearsals that go with them. Last Sunday three generations of the family sang at the Christmas program presented by Church of the Redeemer. Cassidy also sang with her outstanding chorus at Woodlands Elementary, and we managed to find Seminole High School in Sanford, where Hailey and Riley were singing in two of the three choruses from Markham Middle School. (Even the change of venue to a high school auditorium wasn't enough. Latecomers had to stand. We were fortunate enough to have Cassidy make a run for seats way down front.)

Meanwhile, during the same weeks, Susie and her Citrus Singers have been singing everywhere from the Orlando Art Museum to shopping malls, and of course last week's concert at Church of the Redeemer. Tonight (Saturday, the 17th) they will be repeating what they did last year - singing the National Anthem at the Cure Bowl here in Orlando before what will likely be a sold-out crowd as our own UCF (University of Central Florida) team will be playing. (1015 p.m. - just watched the video on Facebook - the girls were great!)

The primary point of this week's Mosaic Moments is that every performance, directed by a variety of musicians, has featured the themes of Peace of Earth, Diversity, and Tolerance. How could it not, after what Orlando has been through this year? (I should note that last Monday marked the six-month anniversary of the massacre at Pulse nightclub. There were some very moving memorial services at the site and at the historical building which now archives most of the Pulse memorials contributed by so many mourners. The Orlando Gay Chorus performed and did an outstanding job, as usual.)

Cassidy's elementary school chorus - c. 60 strong - took the stage in rainbow T-shirts (one group wearing purple, one red, etc.) They sang songs of peace and good will, including that great African-American spiritual, "Follow the Drinking Gourd," a song telling slaves to follow the Big Dipper where it points to the north star.

Markham Middle School (performing at Seminole High) did a beautiful variety of songs, ending with the director emphasizing the importance of their final number, "Let There Be Peace of Earth."

And the Citrus Singers have been doing the same at their concerts. One of the four songs they performed at Church of the Resurrection was also "Let There Be Peace of Earth." Cassidy and Riley are the featured soloists, and their father got a good recording. (Warning: if the video goes into family stuff at the end, just hit the back arrow.)

For the video made at Church of the Resurrection in Longwood, Florida, Sunday evening, December 11, click here.

As for my literary contributions to Christmas, I featured Mistletoe Moment in my last blog, but I'd like to note that there's a lot of Christmas in my traditional Regency, A Gamble on Love (cover & blurb below). 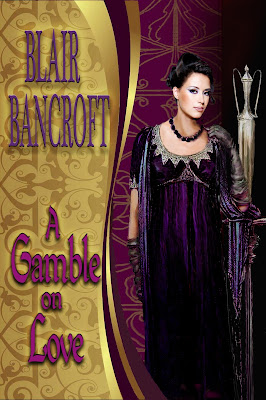 May your holidays, whichever ones you celebrate, be bright, and may 2017 prove to be more peaceful than the sad and awful moments that overshadowed 2016.