Welcome to Grace's Mosaic Moments. Today I'm telling the story of the week following my journey by canalboat.

My trip by narrowboat from Newbury to Bath was only the first half of my sixteen days in Britain without seeing another American. The second half was nearly as unique, as my very English friend, Sally Roberts, and I traveled to places where ordinary, average Brits go for enjoyment, both for day trips and for extended stays. I asked Sally to arrange this part of the trip, specifying only that I wanted to see at least one English garden.

Our canalboat captain called in a fleet of taxies on his cell phone, and saw all his passengers off to their various destinations. For Sally and me, it was Alamo Car Rental on the far side of Bath. (I will not attempt to describe my first experience driving “lefty” in the heart of Bath. Suffice it to say, we made it. Sally, who drives as little as possible, assumed the role of navigator - and reminding me about all the esoteric rules governing roundabouts. I suspect it’s much easier for Americans drivers who drive Brit roads completely ignorant of the rules!)

I soon discovered that, just as we flock to our National Parks, Brits flock to National Trust gardens and historic sites. The “car parks” were jammed, and the crowds vast at Abbey Gardens, Avebury, and the Uffington White Horse; not quite as crowded at Wilton, some distance to the south. Sally, also in charge of reading any literature available, informed me, as we approached Abbey Gardens, that we should keep a sharp eye out for the owners who were known to occasionally garden in the nude. (Alas, we only saw other gawkers like ourselves and acres of flowers.)

As some of you know, I carry a cane when in Britain and Europe, as all the years in Florida without stairs have made it a bit uncertain for me to handle stairs without handrails. The car park for Abbey Gardens is in a ravine probably fifty feet below the gardens. We were about half-way up the necessary long flight of stairs when Sally noticed one of my walking shoes was untied. A fiftyish British couple was descending the stairs toward us. Evidently noticing my cane, the man said something to the effect of, “Here, love, let me do it,” then he knelt on the stairs and tied my shoe. Definitely one of those random acts of kindness one never forgets. Photos of Abbey Gardens below. 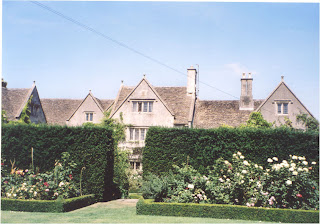 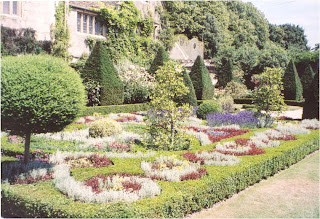 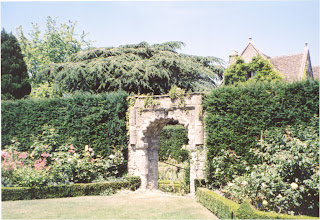 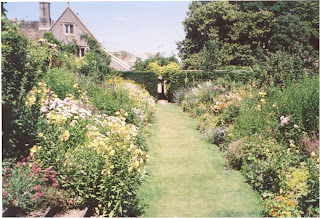 wo nights at Manor Farm, a marvelous B&B, where our rooms had been constructed in a fourteenth century hayloft. And our host cooked a lamb roast, which we ate family style at the huge oak table in the kitchen. 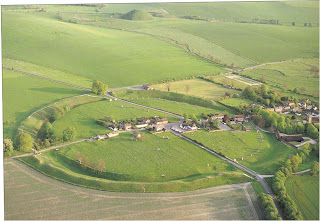 We drove on to Avebury, one of those marvelous historic sites with a stone circle and henge (ditch) in the style of Stongehenge. This site is particularly amazing as people still live in the small village in the center of the ring. (The airview photo is a postcard, of course.)
Below, the central village and a close-up of some of the stones.

I have always been fascinated by the creatures carved into the chalk cliffs in England. The Uffington White Horse is one of the most spectacular. Notice 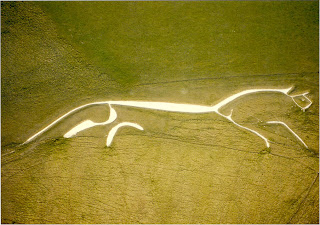 it’s remarkably “modern” design. Every seven years the people nearby hold a “scouring festival” and clean weeds, dirt, and other encroachments so the horse remains on the hillside as it has for a thousand years or more. (Another postcard photo.)

Next week: a look at a Tudor-era resort where Brits enjoy overnight stays with all the amenities, sort of like a giant cruise ship spread over a square mile of land. Except this one has genuine Roman ruins!

Thanks for stopping by!
Posted by Grace at 7:28 AM