A Gamble on Love 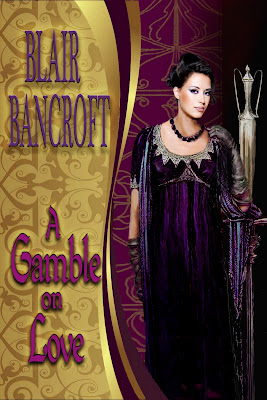 I absolutely love the look on the heroine's face, above. She perfectly fits the daring, if desperate, young heroine in A Gamble on Love, previously published as The Lady and the Cit. When Delle Jacobs found this image, I liked it so much that I changed Miss Amelia's Trevor's hair color to match! I also tweaked a number of other things, including adding a definition of "Cit," as I hope the indie versions of my Regency novels will appeal to an audience broader than our loyal Regency aficionados.

Interesting sidenote: I uploaded Gamble on Wednesday, April 27, but soon discovered we indie authors may have been too enthusiastic about our brave new world. When I uploaded Lady Silence to Smashwords, I was #12 in line for being "smashed"; i. e., translated to various e-formats. Last Wednesday, to my horror, I was told Gamble was #3026! So it may take a while before it pops up on the Smashwords list. However, on Friday night I got "the call" from Kindle (via e-mail, of course). A Gamble on Love had made it to the Kindle store. Yay, hurray, two Regencies down and four more to go.

Below is the blurb for A Gamble on Love. The reviews are for the February 2005 Signet publication of The Lady and the Cit.

* * *
Miss Aurelia Trevor has a problem. Until she reaches the age of twenty-five, she will have no control over her beloved Pevensey Park, and by that time her unscrupulous uncle will have run the property into the ground. Marriage to someone other than her uncle’s leering son is her only way out, but, one by one, she rejects the men on her list of suitors. In desperation, Aurelia does the unthinkable. She hires a solicitor to find her a husband strong enough to stand up to both her uncle and her cousin. And soon learns the truth of that old adage: Be careful what you wish for.

Thomas Lanning is a man of City. Unlike Aurelia, who stands to inherit vast land and wealth, he has made his own place in the world. He is not at all tempted by the suggestion of marriage to an heiress, but other considerations, such as a power base for a seat in Parliament, tweak his interest. Plus an unexpected twinge of chivalry when he hears the full extent of Miss Trevor’s difficulties with her uncle and his family.

Aurelia, who only wants to live in peace on her acres, finds she has acquired a ready-made family in Thomas’s younger sister and brother, as well as a head-strong husband whose campagin for MP fills her household with a shockingly odd assortment of characters. It seems her marriage of convenience is fast becoming a marriage of inconvenience. Just how far will this strong- willed pair bend to accommodate each other? And will they do it before it’s too late?

“Reading how they gradually learn to like and eventually love each other is wonderful. Blair Bancroft is now definitely one of my favorite traditional Regency authors and this book is a prime example of why.” Nicole Hulst, Romance Junkies

“Set against a backdrop of rural politics (and a fascinating look at the early world of “buying” votes) this is a story that entrances, enlightens and endears.” Celia at A Romance Review

Thanks so much for stopping by. A recent spate of contest-judging has led me to a blog next week I'm thinking of titling, "Writing 101." Come on back.