A Tribute to Queen Elizabeth II

May I suggest those new to Mosaic Moments in the last two-three years take a look in Archives from 2011-2020 for a peek at the many, many tips on Writing & Editing published during that time. If you'd prefer them organized by category, they are available in book form from Amazon:  Making Magic With Words

Grace Note: With Ian bearing down on the Orlando area, I could be without power by tonight (9/28/22), so the date of the next post could be even farther into October. Sorry about that, but Ian is the worst hurricane to hit Florida in a very long time. "I'll see you when I see you," as the saying goes. 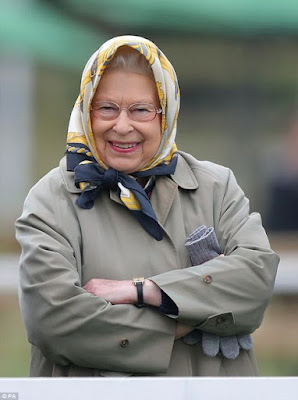 We are all familiar with many aspects of Queen Elizabeth, from the regal formality of state occasions to family matriarch (both stern & loving) to humorous vignettes like her tea with Paddington Bear. But the following tale, a peek behind the scenes at Balmoral, is perhaps the best tribute I've seen, showing not only the queen's sense of humor but her humanity.

Grace note:  Although this story has been widely circulated since the queen's death, I repeat it here so none of my blog readers around the world will miss it.

The Tale of Queen Elizabeth & the Clueless American Tourists

Griffin once accompanied the queen when she was walking in hills outside of Balmoral when two American tourists on vacation reportedly approached her.

One hiker – not aware of who he was speaking to – asked the queen where she lived. She replied that she lived in London and said she had a holiday home nearby, but did not specify that she was referring to Balmoral.

The hiker then asked her if she had ever met the queen.

"I haven't, but Dick here meets her regularly," Elizabeth reportedly said. The hiker immediately turned his attention to the bodyguard and asked him what the monarch was like in person.

"I was with her a long time and I knew I could pull her leg," Griffin said. "I said 'oh, she can be very cantankerous at times, but she's got a lovely sense of humor.'"

Overjoyed, the hiker unwittingly asked the queen if she could take his picture with Griffin.

"Before I could see what was happening, he gets his camera and gives it to the queen and says 'can you take a picture of us?'" Griffin recounted.

Elizabeth took a picture of the two before Griffin took the camera and photographed the queen with the unknowing tourists.

"I'd love to be a fly on the wall when he shows those photographs to friends in America and hopefully someone tells him who I am," the queen allegedly told Griffin.