Random Thoughts on a Wayward World

I chose to illustrate this week's post with a photo taken behind the vacation home my daughter and her husband once owned on the Suwanee River (just south of the Florida/Georgia line). (This spider is but one of many that stretched their webs from tree to tree in the woods between the house and the river.) Why a spider illustration? Because there seem to be so many strands of aberrant-thinking, hatred, and downright evil spreading their webs through the Great American Society that this whopper of a spider and its giant habitat truly seemed the best choice. 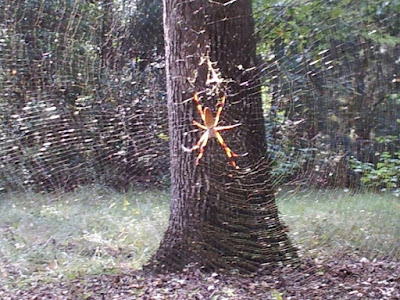 Grace note:  I've been thinking about the following post for several months, but I had to work up to it. How very much easier it is to "slide by" in this world rather than tackle difficult issues head on. But my conscience wouldn't let me rest, so here are some thoughts from a person who has been around for more years than most.

As someone who can remember Pearl Harbor—okay, I was young enough I thought it was an island off the New England coast (i.e., close to where we lived), because my parents, hoping to shelter me, did not explain what I was hearing on the radio. (That's right, readers, RADIO. TV did not come along until I was in college!) Which means, I have seen and endured a great many things over umpteen years, and I have to tell you, as one whose earliest strong memories are of World War II, that we are not doing well. In fact, despite all our modern inventions, we seem to be moving backward into an abyss as dark as the Dark Ages. Into an age of fear and ignorance. Of dog-eat-dog aggression, with little thought for the poor peasants fighting their lords' battles or being ground under the heel of "I don't give a damn what happens to anybody but me!"

We all scoff at Conspiracy Theories, right? Well, perhaps not. I have to admit I never fell for the tale that Lee Harvey Oswald acted alone. And I'm nearly positive something alien hit the ground in Roswell. (I even know someone who was stationed in Area 51 and reported that "the proof is there.") And after events of the past decade, it comes as no surprise to anyone that those of us who thought WWII ended Nazism were wrong. On the opposite end of the spectrum, there seems to be a group of people so progressive that they have turned their backs on the concept of law enforcement and punishment for one's crimes. Surely, just as damaging as the concept of White Supremacy.

How did we get ourselves into such a fix? Our lives were supposed to be better than those of our parents, our children's lives better than ours. Yet here we are, still controlled by a Grand Conspiracy of the Entitled—the Oligarchs, Big Business, and our so-called "law makers" who bow down to the lobbyists for both wealthy factions—and going down hill fast.

As an example of how how our modern age has adversely affected its citizens, here's a story I was told at the FBI Academy in Quantico, VA, when a group of authors toured the facility:

The FBI speaker complained that it was getting harder and harder to find recruits with "street smarts." It seems modern young men and women spend so much time on their phones and at their computers that they do not get out into the real world and discover life as it really is.

To take that concept down to a personal level. My children were free to roam our neighborhood, play with their friends; they laid pennies on the railroad tracks for trains to flatten; they walked a narrow board across a swamp to cross to a neighboring shoreline community that had a candy store. We had a mounted bell from an old steam train in our front yard, and when it was time for supper, I simply rang that bell, and all the neighborhood kids scattered to their respective homes. I should add that I had the same freedom to play as a child, though not as many children in the neighborhood as my children enjoyed.

And then came my grandchildren's time to grow up. No freedom to roam. Nursery schools, scheduled play-dates, supervised visits to the park. No opportunity to develop independence, to be forced to problem-solve, to learn to interact with others when no adult is watching. Sigh. A loss, a definite loss.

My father was a high school principal, followed by many years as a Superintendent of Schools in two different towns in Connecticut. He was a graduate of the University of Nebraska, with a Masters Degree in Education from Harvard. I can just picture his outrage if some group of parents tried to tell him what should be taught or what books should be in the school library. Did he exercise censorship? Yes, he did. I distinctly recall speaking enthusiastically about a book called Timur and His Gang. The next thing I heard, it was off the shelf, gone because it was "Communist Propaganda." I recall the incident so vividly because I was in elementary school during WWII when the Russians were our allies, and I was totally surprised by my father's negative reaction. (I should add that this happened a few years before the McCarthy era.*) Nonetheless, I ended up with such a good education that the Dean of my Ivy League college called me in to discuss how someone with a public school education was getting better grades than the private-school graduates who predominated in my classes.

*If "McCarthy era" means nothing, I suggest you look it up. In a nutshell, "McCarthyism" became another term for "Witch hunt."

The moral of the story above:

Education should be left to the professionals.

Teachers should be allowed to teach a balanced curriculum (including Civics!), not spend their time "teaching to the tests" that certain ignorant  or arrogant (just want to throw their weight around) state legislatures inflict on their school systems. (Florida, where I live, being one of the most guilty of this atrocity against a good education.)

Certainly, parents have a right to question, but School Boards should be unwavering in upholding STUDENTS' rights to a comprehensive education that will prepare them for their lives to come, whether it's college, technical school, or direct entry into the job market. And School Boards should never cave to censorship. The narrow-mindedness of a small minority does not justify depriving the vast majority of students from reading books that will make them think! (And yes, I recall my personal experience with censorship so vividly because I had doubts about my father's action, even at age 12.)

More next week on what I fear may be our slide into mediocrity, something we need to fight against with passion!

And because I don't want to close on a negative, I asked my son for a Willow update. Clearly, Willow enjoys "tucking up."

Her team was named among the top ten.