Grace note:  claiming Birthday Privilege, I am taking a week off. Next blog: July 30

A box of doll clothes has been sitting on my bedroom floor for more years than I care to admit - ever since my daughter returned all the outfits I had made for the 18" preteen dolls I gave my three grandgirls way back when. After all the work that went into them, I guess I just couldn't bear to give them up. But this week . . .

Long story short, I did an inventory, bagged & labeled each outfit, and offered the clothes (via our choir email/text loop) to anyone who knew a girl with an 18" doll. I also had to do a bit of spot removal here & there, and of course, I ended up with a Miscellaneous pile, outfits that were inevitably missing pieces after a number of years of use. (Mostly Tops - small enough they were likely swallowed by the washing machine.)

In the end, not counting the Miscellaneous, I had nearly thirty complete outfits, from dresses and evening gowns to winter ensembles. Two families ended up taking them all, one a family I knew well and one consisting of a mother and two daughters who are newcomers to the church. I was truly thrilled to see the doll clothes go to good homes. Below, pics of two of the many (admittedly, two of the fanciest): 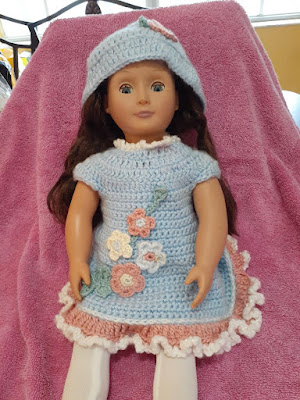 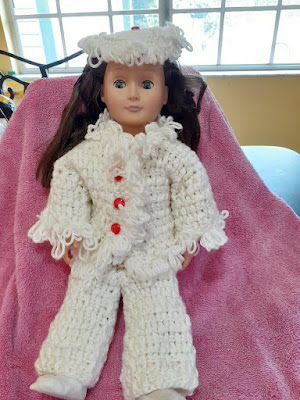 I have been singing in choirs since I was 8 years old - and no, I'm not going to say how long that is, except "way over half a century." But this morning was something totally new. We arrived for rehearsal to find the following in the bulletin: "The flowers at the altar today are given by Liz and Larry Sole in thanksgiving for Tim Hanes and Our Wonderful Choir at Resurrection." Wow! I immediately took a photo of the flowers. After rehearsal, we went en masse to thank the couple; and after the service we lined up for a photo with "our" flowers. Believe me, we were all touched by the Soles' thoughtful gesture.

Below, a few pics from the Awards Ceremony at the end of Cassidy's Police Explorer 2-week boot camp. As most of you already know, Cassidy, my youngest grandgirl (who turned 16 this Sunday), exchanged doll clothes for guns & bullets some time ago. And, sure enough, she picked up another marksmanship trophy.