My cat Squeak likes to sleep on tables, indoors and out. But she's never been destructive until the past week, when she sort of went nuts. At first, I attributed it to my inability to provide her with her favorite cat good (lost on one of those container ships, I suspect); but then I realized that I had added a third plant to a table she likes to sit on, leaving her very little space. Whatever the reason, on Night One of her rampage, she knocked over a plant, my lawn rake, a basket of garden gloves, and sent two garden hats from a chair onto the floor. On Night Two, she knocked over two plants, sending them crashing to the floor, the soil spilling out. She also decked the rake again. And it looks like she's tearing the rim off wastebasket/rain-catcher. Can't wait to see what she does for an encore. I've always said she's more like a spoiled child than a cat, and I guess she's out to prove it. 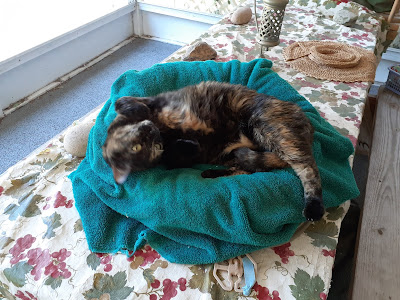 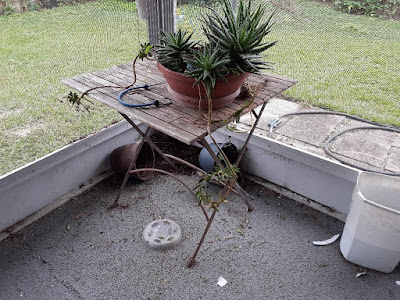 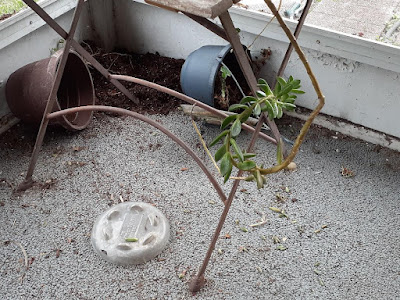 To end on a happier note, here's a fabulous sunset posted to Facebook by Martha Duke Anderson. 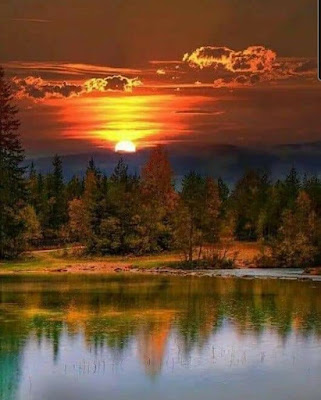 This week, a reprint from 2016 (copied from Making Magic With Words, a compilation of my blogs on Writing and Editing from 2011-2019). My advice has always been aimed at newbies, hoping to spare them some of the anguish I endured and offering wisdom I learned the hard way. After looking over the blog on understanding your genre, much of it still seems valid. Even indie authors will run up against readers balking at novels that don't "follow the rules." A concept to which I am diametrically opposed, but that doesn't keep it from being absolutely true.

I frequently find my blog topic in events that happened during the week, whether in my own writing or in my editing work. And this week, as I attempted to explain the nuances of Romantic Suspense to an author who thought that's what she was writing, I realized something I had forgotten since those first struggling years as an author:  sometimes it's really tough to know what the guidelines are for a certain sub-genre of romance, let alone follow them well enough to impress an editor or agent.

Frankly, if you want to "write in the cracks"—skimming styles from multiple genres—indie publishing may be the only way to go. Editors who must adhere to the requirements of a "line" and agents who want to be sure they're going to make money with your book are going to be leery of any story that strays from the accepted norm, no matter how good it is. Certainly, I ran into this problem head-on when I started submitting back in the late '90s. I was writing what I wanted to write—and running head-on into the conventions of romance. Back then, it was pretty much "Start out writing for Harlequin/Silhouette, and if you're good enough, maybe you'll be able to break out into something longer and more serious (after a suitable number of years as an apprentice). My problem:  I started out writing "Mainstream," although at the time I had no idea that's what I was doing. (And yes, as I've said before, those first two books, Tartleton's Wife and The Sometime Bride, are still the best work I ever did. Because I wrote from the heart, paying no attention to rules I didn't know existed. As proof positive, I was just granted my rights to my books published by Ellora's Cave Blush—all but Tarleton's Wife, which in its fourth incarnation since it was first published in 1999, is still selling too many copies to qualify for rights reversion!)

So what's an author to do? In attempting to analyze only Romantic Suspense, I was forced to acknowledge three styles:

A good example of an author who writes all three is that most prolific and respected romance author, Nora Roberts.  Although she no longer writes category, that is how she got her start. And she seems to alternate her more recent books between series aimed at the "middle" romance market and the more hard-hitting single title mainstreams. And then there are her mysteries, written under the pseudonym, J. D. Robb!

So how does an author figure out the vagaries of Romantic Suspense, let alone all those other sub-genres of Romance? I have only one bit of advice. Explore book stores and online until you find the genre you like best. (You probably already know what that is. But maybe not. Until recently I avoided one of my true loves—Science Fiction— because I thought I didn't have the technical knowledge to write it.)

Do your homework. Find the genre you most want to write. Then read, read, read the best books you can find in that field. Don't even think of writing a single word until you've researched the parameters of your chosen genre.

Example:  If you want to write a cozy mystery, death is usually off-stage, even the action is not "strong stuff."  Include too much realistic drama and the editors of "cozy" lines will shudder and shy away. On the next level up, I would include the authors Rhys Bowen, Julie Hyzy, Tasha Alexander, and Catharine Lloyd, who hit a happy medium between "light" and "serious" mystery (and without a lot of blood & guts). In the more hard-hitting Mainstream mysteries, Robert Galbraith (J. K. Rowling), J. D. Robb and C. S. Harris shine (sticking to female authors only).

The same sub-genres apply to every other romance genre from Contemporary to Historical. There's the simple "category" story, the longer middle-of-the-road book designed to appeal to the majority of readers, and the harder-hitting Mainstream novels intended for those who want more "meat" in their fiction.

And the problem is, unless you're going indie, you have to write what the marketing departments of New York publishers want. (With few exceptions, NY is where agents make their money. From what I've seen recently, even the e-market for erotica, which had been paying well, has slowed.) So it's basically, “conform or go indie.”

This does not mean you cannot have a unique idea. Lori Sjoberg sold to Kensington when she made a hero out of the Grim Reaper! It's how you approach your idea that matters. And exactly because there are so many ins and outs to each sub-genre of romance, you must do your homework. You must pay attention to what is selling in your chosen field and not stray too far from the fold until you've established enough of a reputation to branch out with a few new wrinkles to the genre.

Then again, I'm glad I didn't know any of this when I wrote Tarleton's Wife and The Sometime Bride. They might never have been born.

The big decision:  Write what you want to write or Write what editors and agents think readers want. (NY editors have a lot of statistics behind them, but the enormous success of indie publishing indicates they narrowed the market too far.)  So . . . your call. Just be aware that for all that editors tell you to write the "book of your heart," they really mean:  "Write the book of their heart" or "Write the book that meets the criteria of their company's executives."

Good luck! And do your homework. 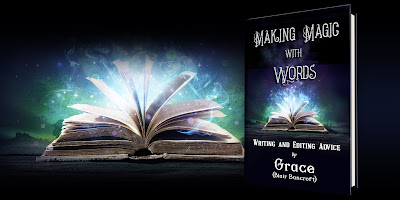 Below, my first two books, written without any concept of what the market wanted - and still my best books ever. And yes, they've withstood the test of time, but it was a struggle, and not what I can recommend to others. 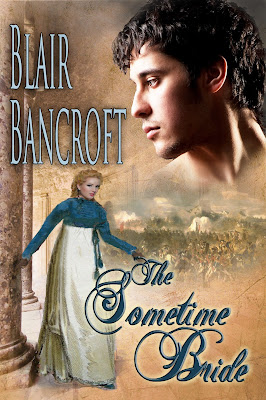 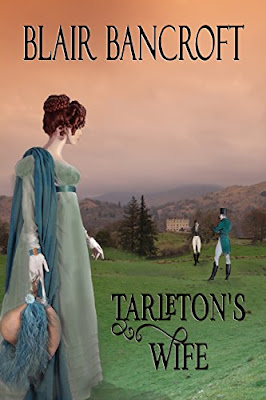