Amazing photo of a whale passing beneath a small boat. (Found on Facebook - no attribution) 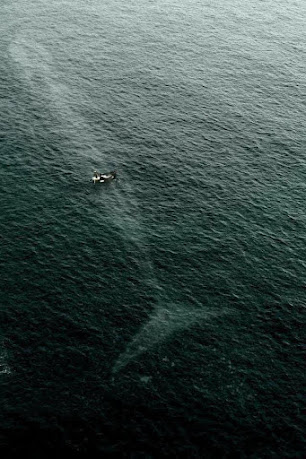 I was never a "Romance" reader, at least not in the traditional sense of books published of Harlequin/Silhouette and Mills & Boone, in which at least 60% of the books must focus on the romance. I wanted to write books strong on Character, Plot, Action, and genuine History and low, very low, on sex scenes. (If some of my favorite authors wrote lengthy sex scenes, I mostly kept paging forward until past "all that.") So, not surprisingly, as the years passed, my reading list turned more toward Mystery, Suspense, and Fantasy/Paranormal (again, sans graphic sex). Does that make me a prude? I hope not. I don't believe love scenes should stop at the bedroom door; I simply don't care to read page after page about about what part goes where.

The nice thing about reading on a Kindle is that I only have to hit "Home" to see a list of everything I've read for the last couple of hundred books, with Archives always available to reveal hundreds more. So, as of today, what do I see?

My greatest departure from normal yet. I still can't believe I got hooked on a series so violent it sometimes turns my stomach. Not me, definitely not me. Yet like bingeing on popcorn at the movies, I've been plowing my way through all FORTY-SIX books of the series (just past 30 at the moment), and simply can't stop. Why? Darned if I know. The books are so hastily written, repeated or out-of-place words are common—better proof-reading sorely needed!—but here I am finishing one book, rushing to the computer to download the next. So what is it that spurs my interest?

Incredible imagination and World Building. Sympathetic heroine. Over-the-top drama and action. Excellent characterizations of a whole host of characters—book after book after book. So if you can stomach the violence, which becomes really icky at times, I recommend the The Girl in a Box series by Robert J. Crane. There are also numerous references to what might be called "contemporary culture"—Game of Thrones, Star Wars, Star Trek, etc. Even an "In" joke for Floridians:  in Book 32 the series heroine has just soundly trounced Hades, the God of Death (her great-grandfather). He announces he is ready to retire—perhaps to The Villages in Florida.]

Needless to say, I could not take a steady diet of the action/violence above, so in between those thirty-some books by Crane, I've sandwiched in old favorites and an occasional new-to-me author. Of the latter, I was delighted to discover a real winner in Jeff Wheeler's Kingfountain series. I mean, how many authors can write an entire book where the two main characters are EIGHT years old and keep it absolutely fascinating? Wheeler's World-Building is outstanding, his epic fantasy off to a running start. (In Book 2, his hero and heroine have made it all the way to eighteen - reminding me of my Matthew Wolfe!) Kingfountain is an Alternative World Historical series based roughly on Richard III and his nephews who disappeared into the tower, and in Book 2, drawing on the Arthurian legend. There's a hint of Joan of Arc, as well. The sries has strong elements of Fantasy and is suitable for all ages. Strongly recommended.

An old favorite of mine, Lindsay Buroker, has embarked on a new series: Dragon Gate. Though not at the top of my favorite list, the series, now in Book 2, is shaping up to be another great read for lovers of Fantasy/Paranormal. And although it contains plenty of talk about romance, no one has time to stop long enough to do anything about it. (Or the obstacles to Romance are insurmountable, at least so far.) I recall fondly that Buroker's Emperor's Edge series went through eleven books before the hero and heroine exchanged their first kiss.

I have also enjoyed the latest from several other favorite authors:  Anne Cleeland, Tasha Alexander, C. S. Harris, and Charles Todd. But I threw up my hands in horror at the travesty perpetrated on his/her readers by an author whose mysteries I have enjoyed for years. And who shall remain nameless. Guess it goes to show even the mighty can write bad books, or was this an early work that should have stayed in the drawer?

Sadly, also on the negative side, I plunged into another new-to-me author, truly admiring the "atmosphere" of the opening chapter, the excellent descriptions and knowledge of the setting, and yet . . . as I read further, I felt my interest waning. But why? Classic Gothic heroine, brooding hero, a good variety of secondary characters, an intriguing mystery . . . so what was wrong? And then it hit me. I thought every author had long since gotten the done-to-death message of "Show vs Tell." Guess not. (Clearly, I have been at this so long I forgot new authors come along all the time, and this author had definitely missed the message.)

There are a number of posts on Show vs Tell in the Archives of Grace's Mosaic Moments. Or you can get all my Writing & Editing posts in organized form in Making Magic with Words (available on Amazon Kindle). But in a nutshell, SHOWING your story means getting inside the heads of your main characters and letting them show readers the story, instead of the Author standing on the outside, TELLING readers what is happening. Showing is Active; Telling is Passive. "Showing" makes your book come alive. "Telling" gets boring, really fast. Particularly in the many sub-genres of Romance.

To sum up this week's Mosaic Moments, I have heard some authors say they don't have time to read. I find that downright sad. For one thing, we need to support each other. We also need to fill our soul with the wonders of other people's creativity. So whether you are an Author or simply a Reader, stimulate your mind by basking in someone else's imagination. Wallow in Worlds Unknown. READ A BOOK!