Even I am not old enough to have seen the original of this, but hopefully everyone has encountered this Laurel & Hardy classic at some time, now so cleverly adjusted to fit our current crisis. 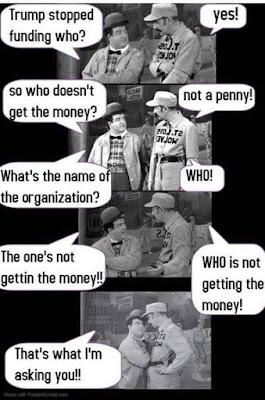 With many, including myself, still opting to go out only when absolutely necessary, reading has become more than a pleasurable hobby—a life-saver, in fact. Below are some of books I've turned to during this crisis—mostly mystery, scifi, and fantasy, I note. Some with Romance, some not. As I look over my scribbled list, I find some of it incongruous, but this is it—what Grace has been reading over the past three months.

Grace note:  Not included in the list below are Georgette Heyer, Dorothy Dunnett, Jayne Castle, and Linnea Sinclair - primarily because I've already read almost all of their books three times.

Lucy Walker. I have a whole slew of yellowed paperbacks on a shelf in my bedroom, carefully moved from house to house for a quarter century or more. They are my sole concession to Harlequin/Silhouette-style romances:  short, simplistic, and in this case, excruciatingly dated by an attitude toward women even more extreme than I recall from my own young adulthood in the 50s. For these stories are set in the Western Australian Outback where attitudes in the mid 20th century seem to have been fixed in the Victorian era. And yet I go back to these books again and again—partially because they are a peek at a world I've never known (and now faded into history even in Australia) and partly because they are full of interesting characters with heart-tugging problems. They are multiple point of view, even head-hopping by some people's standards, yet even when I groan at attitudes that seem to come out of the Ark, the books speak to me.

Claire Darcy.  To the best of my knowledge, Claire Darcy was the first author to follow Georgette Heyer into the modern surge of Regency Romance. Her heroines are delightful, her heroes everything a reader could wish, her research and Regency vocabulary top notch. I am thoroughly enjoying revisiting these old friends.

Kate Ross. Kate Ross's Julian Kestrel mysteries are a joy to behold. And in the final of the four-book series she was allowed to go above and beyond the first three books, giving it her all as she was dying of cancer. These are magnificent mysteries, with the main character perhaps the biggest mystery of all.

Charles Todd. Charles Todd is the name of a mother-son writing team, which probably explains why the female characters are so well done in a series with a male protagonist. The depiction of England just after World War I is remarkable in itself, and the mysteries are as complex as any I have ever read. (Far more so than most.) The Detective Ian Rutledge series also has a touch of the paranormal. I have only begun the Bess Crawford series (set during WWI), but it appears to be of the same high quality. Unlike the earlier series above, these two series are still in active production.)

Scott Lynch.  I raced through all four books of the Gentlemen Bastard series, only to be totally frustrated to discover Book 5 has been long delayed. (Gnashing teeth here.) As mentioned previously, this series is about as creative as it gets - even more so than the books of George R R Martin.

Lindsay Buroker.  To my joy, I discovered Lindsay Buroker had managed to write 4 books in a new series before I found out about Death Before Dragons. Rushed through them all, can hardly wait for Book 5—definitely my most favorite of her many series since the Emperor's Edge.

An Oldie - The Iron Duke by MelJean Brook. Although I still grind my teeth over the lack of background to this book—I keep thinking there's an earlier book I missed—I love this book. (I have to admit, I'd forgotten it's one of the few "hot" books I consider keepers, and that's because the book itself is so well done I never felt that sex was the primary reason for writing the book.)  That, and Brook's Kraken King series are long-time favorites.

New Books
It's always a delight to find a new author. I tried several over this period—only one made the cut. One of the rejects might have been a good book, but all I saw were the errors in punctuation. Basic English, grammar school stuff, totally ignored. I simply couldn't force my way through it. There's another book I may return to, but it was so agonizingly "tell," I had to quit. Maybe sometime when there's nothing else to read.

The Crossing by Matt Brody. This appears to be the start of a new mystery series—interestingly with a female protagonist. Very well done. Looking forward to Book 2.

Defy and Defend by Gail Carriger

Hillary's Back! by Faith Martin

Grace note:   I do wish Martin hadn't felt it necessary to kill off the love interest in order to revive her Hillary Green series, but Hillary herself is well worth reviving. This is a series "back by demand," as indicated by the whimsical title.

There are, of course, thousands of wonderful books out there - this is just a list of what I personally have been reading. I hope you find a treasured new author among them.
And then there are the fascinating Regency Gothics by Blair Bancroft - available at Amazon Kindle, Smashwords, B&N Nook, & other ebook vendors. In reverse order . . .

I happened on a different mask pattern, but when I tried on my effort to duplicate it, I decided it was a design best used by men. On the pro side, this mask - like masks with 4 ties - is one-size-fits-all, whereas masks with side loops can be too small or too large & require replacement or adjustment. This mask is fixed in place by one continuous loop of 1/4" elastic which goes over the top of the head, though the sides of the mask, the ends knotted behind the neck. The mask, once knotted, can simply be slipped on or off. Easy-peasy, right? Except the continuous loop is also the biggest "con."  In the course of slipping the mask on and off, it messes up the hair. Big time. I took one look at me wearing this style and decided I would NOT post a selfie of me modeling it. For men, however, I can definitely recommend it. See photo below. 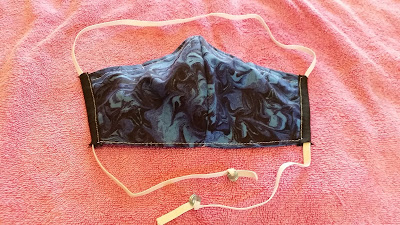 Mask-makers, the sides are bound in extra wide bias tape, the elastic run through in classic fashion, using a safety pin. (This means you stitch top & bottom only before turning right side out through either side opening.)