A few weeks ago, the grandgirls asked their mother if they had any cousins "like Daddy has Lionel." Susie's answer was to add the girls and me to a business trip to NYC, which she, her husband Mike, and his cousin Lionel had to make last week. We arranged visits with cousins in NYC and attended a reunion of my husband's side of the family in New Haven - with cousins galore. We also got to see my son and his wife for the first time since their wedding three years ago. So today's Mosaic Moments features some of the highlights from that trip. Most photos are by Susie, but a few are mine. Nostalgia reigned. Except for a look-see at our old house - once an 1830 Federal, now subsumed into architectural madness, including one side turned Dutch colonial, the other architectural nothing, plus a five-car garage extending out into what we always called the back lot. Horrors!

With a gang of seven, it was more economical to stay on the Jersey side of the harbor. As we were Ubering into the city the next day, I managed to capture the NYC skyline. 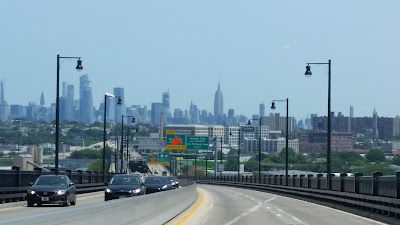 While Mike, Lionel, and Susie made a business presentation, the girls and I—plus a relative who lives on Central Park West and my daughter-in-law from New Haven—did my favorite spot, the Museum of Natural History. LOVE that place. I thought previous shows I'd seen at the Hayden Planetarium were great, but this one was mind-blowing. Even our three teens were impressed (well, Cassidy became a teenager a couple of days after we got back). FYI, this is the museum where Night at the Museum and subsequent sequels were filmed. 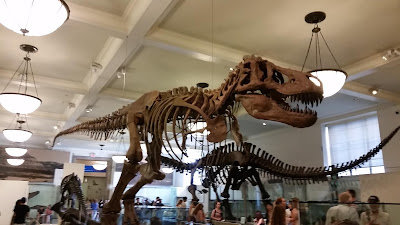 Grabbed the train out of Grand Central for the journey to New Haven and our first "airbnb experience," an old house across the street from the Pequonnock Yacht Club and directly on outer New Haven harbor. The next morning Susie and I went shell-hunting in Branford (our old home town) while everyone else slept in. Susie also takes great flower photos. 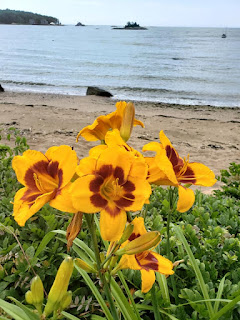 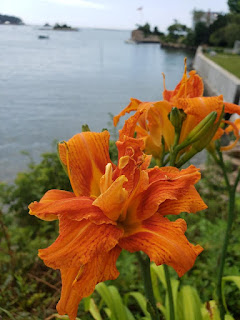 Number One on our "to do" list when everyone was finally up and fed was a visit to Stony Creek, the village next to where we used to live in Branford. Stony Creek, once a bustling resort community, is home to the Thimble Islands - 25 rocky outcroppings, many of which have cottages on them. Some only big enough for one, a few with as many as twenty. They are strictly "summer only." The Thimble Island Ferry began as a way for people to get to the cottages and back. Now there are three ferries doing a thriving tourist business, showing off the islands' unique landscape. Our old house looked out over the Thimble Islands.

The '38 hurricane (a totally unpredicted no-name storm) wiped out the trolley tracks that used to run from New Haven to Stony Creek, but when we lived in Pine Orchard, my three children (and friends) walked a trail through the salt marsh that followed the old tracks. This big adventure ended at the candy store in Stony Creek and was a very special childhood memory. When they did it way back when, the only way to reach the trolley bridge over the central tidal river was on wooden planks placed on either side. Now, sigh, it's a well-maintained bicycle as well as hiking path. Too tame for real adventure, but still a fine wilderness walk. Susie, Lionel, and the girls took the path, while Mike and I drove around to wait for them at the Trap Rock parking area (still carefully unmarked - you have to know where to find it). 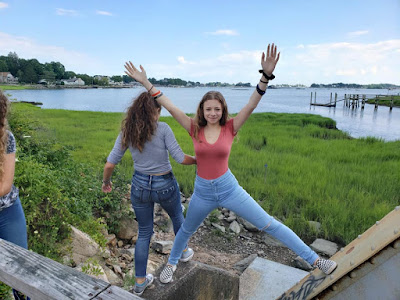 The following day we made a pilgrimage to Branford College at Yale, where Harkness Tower is. My husband was a Fellow of Branford College. While an undergraduate (WWII vet), he founded the Yale Guild of Carillonneurs, the Yale Calendar, and after graduation the Yale Audio-Visual Center, where he remained for 30 years. The original carillon in Harkness Tower had 10 bells, but during his time at Yale Elliott was asked to supervise the gift (and construction) of 44 more bells, made by the Taylor Company in England. Last Saturday morning we were privileged to have a special tour of the carillon and a delightful concert by Ms Sarah Luckart. Susie and the girls were even allowed to play the Westminster Chime sequence, with Sarah pointing out the correct handle to push.  If you would like to hear some of the bell concert and the Reale family's efforts at being carillonneurs, please see the links below.


After Yale, we drove up Prospect Street to the house that was used in the Addams Family TV series. The girls clowned around, and then climbed a tree in the front yard. 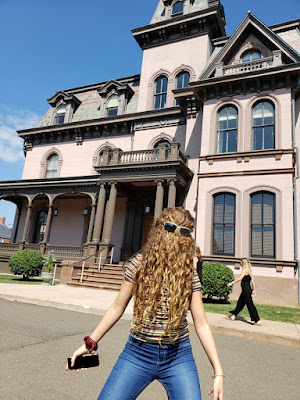 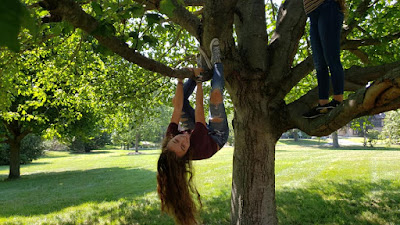 And on our last evening in New Haven, our relatives hosted a Kone family reunion, proving to the grandgirls how many cousins they actually have, even though some are in the "kissin' cousin" category; others cousins by marriage. Missing from the photo: 3 of the youngest generation who were already tucked up in bed. 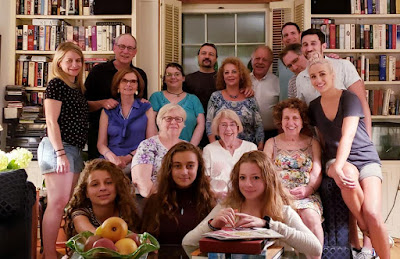 And to cap a busy week . . .
We celebrated my __ birthday with lunch at Season's 52, with corn, bacon & sour cream flatbread and a dessert tray WAY better than birthday cake! (I had the "pecan pie.") 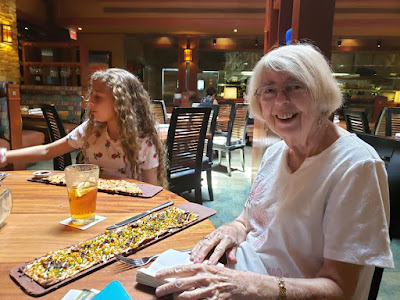 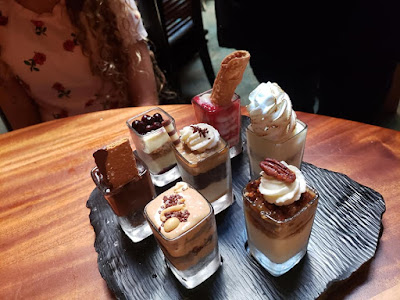 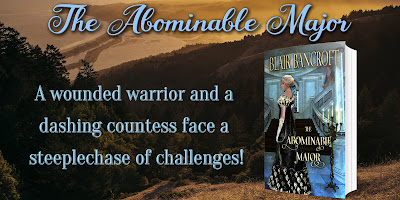 For background information on this tale of how a British cavalry officer who lost a leg at Waterloo finds his way back into the world—and the love of his life as well, check out my Facebook Author Page at: click here.
For a link to Blair's website, click here.