Launches never get old. Here in Orlando we watch every one with bated breath, whispering, "Go, go!" (Especially those of us who remember the early days when they didn't!) But in recent years we've become more and more fascinated with Space X's ability to bring the booster rockets back, landing them dead center on their landing circles, to cheers from the control room and across Central Florida. On Thursday evening Space X allowed access to a camera on the booster itself, giving TV viewers an opportunity to see booster separation, deployment of the steering fins, and the "burns" necessary to guide the booster on its plunge back to earth. It was breathtaking—the earth coming closer and closer until we could see Florida, the Space Coast, the circular landing pad. And then the switch to a distance view of the booster settling dead center onto its pad.

Rockets burn, go up, their payloads inevitably disappearing out over the Atlantic. But to watch the booster plummet back to earth only thirty miles away. Wow! If I'm recalling correctly, the announcer said this was the 49th time Space X had brought a booster back.

Not to be overshadowed—this Falcon 9 carried its payload to the International Space Station in a "Dragon capsule"—the capsule designed to put American astronauts back into space in a vehicle of our own making. We've got our fingers crossed. 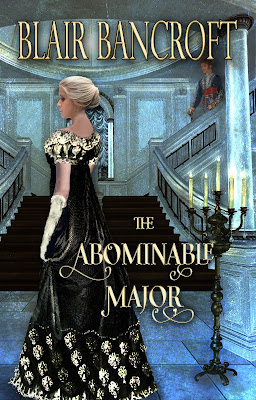 Alas, the hero of this tale is relegated to the staircase in the cover above, but since he's more than a bit sensitive about hobbling about with aid of a cane, that's probably just as well. (Though he may not be too happy about being overshadowed by the saucy countess who first called him, "The Abominable Major.")

I have to admit this was a hard book to write. How to do justice to a courageous cavalry officer who has been reduced to little more than a glorified bookkeeper? A man who never intends to return to the world he left behind when he and his best friend buy a hops farm in Kent.

The challenge:  how to transform Major Courtland Randolph to . . .
Sorry, I'm not going to make the mistake of putting a spoiler in this blog—suffice it to say, it takes a whole series of crises to make the Abominable Major realize he's still the man he once was.

Major Courtland Randolph, after losing a leg at Waterloo, abandons the world of his birth for a hops farm in Kent. He is not pleased when his former commanding officer maneuvers him into returning to society as protector of the lady who once termed him, "The Abominable Major." Yet in the course of dealing with a dashing Russian countess, political unrest, his ex-fiancée, an importunate prince, a mysterious young man from the London slums, a high-born runaway, and a dramatic change in his private life, Court finally accepts that he's still a man. Man enough to love and be loved.

Author's Note:  The Abominable Major has so many cross-over characters from The Lady Takes a Risk that you might want to read Lady first.