We took a short cruise during Spring Break week, but not many pictures to show for it, as it rained the entire time! We all agreed, however, that after the many cruises we've taken with perfect weather, we were long overdue.  Interestingly, as I looked at the formal group photo, I realized this was the same group of eight that cruised the Med in 2015, previewed by three days in Barcelona and followed by a day in Venice and four days in London. The girls, naturally, are now far more grown up. This is the first cruise they were allowed to wander on their own (each with a companion from school). Our total group, with the girls' friends and parents on Grand Classica was NINETEEN. A really long table at dinner. (That's me hiding between Hailey and Susie on the right.) 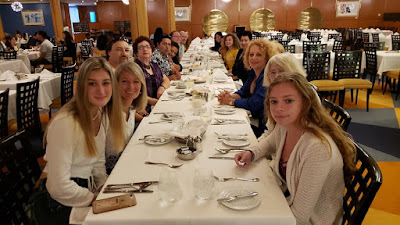 A good story goes with this one. When Susie and I went to order this formal portrait, Susie said something about it being too bad Gloria was wearing her sunglasses. The photographer took a close look at the photo and said, "Wait a minute." He came back with a pair of glasses he had found. Susie checked them and yes, they were prescription. When we took them to dinner that night, sure enough, they were Gloria's. Needless to say, when I picked up the finished photos, I thanked the photographer profusely for having such a discerning eye!
FYI, if there was one thing I didn't need on this trip, it was my sunhat! 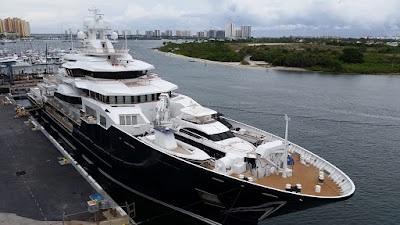 Mike counted SEVEN boats on the deck & sides of this private yacht in Palm Beach Harbor. Note the size of the cranes on the forward deck, plus four boats, including the black one peeking out from behind the cabin cruiser (center).  There was also a helipad on the aft deck. Wow! When I took this pic under lowering skies, I figured it would be my best photo of the trip - and it was. FYI, a crewman told my son-in-law that yachts like that cost a million a foot!

Fortunately, Spring Break was not over when we got home, and Susie took the girls off to our favorite Caspersen Beach in Venice, FL, where we used to live. So finally, some time at the beach. FYI, it was still raining when we returned to West Palm, deluging us for about the first twenty miles of our trip home. After that, nothing but blue skies. Not a bad trip as the boat's amenities, shows, games, and food were great. A good time had by all. 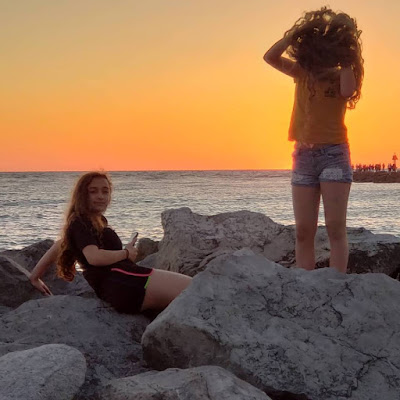 For a link to the Contest questions, click here.

Thanks for stopping by,
Grace
Posted by Grace at 8:39 PM