For the past eight years (the life of Grace's Mosaic Moments), I have refused to write a post about words that warn an author he/she is straying into "Tell" not "Show." But while struggling through the second book in the series that inspired my most recent rant against using Storyteller Mode, I found myself scribbling down a list of words that jumped out at me. So, after explaining why I've been reluctant to make a list, I'm finally going to do it—give you a partial list of the telltale signs that scream, "You're slipping into "Tell" Mode"!

Over the last twenty-plus years, I have judged over 450 writing contests, and the saddest entries I saw were from eager-to-please authors who had been told the verbs "was" and "were" were signs of "Tell not Show," and they were so terrified by this admonition that they left out those verbs completely, which sometimes meant they wrote full sentences without any verb at all—sentences with nothing but a big hiccup between the subject and the predicate. Painful to read, painful to judge. How to tell these authors that omitting "was" and "were" would not miraculously convert their work to "Show," that, in fact, they had shot themselves in the foot, creating work that was almost unintelligible?

So, right up front—DO NOT TAKE THE FOLLOWING LIST VERBATIM! It is nothing more than a guideline. Every good author uses these words. In fact, I wrote an entire post giving examples from a number of well-known authors in which they use "was" and "were" as they were intended to be used, creating marvelous descriptions of people and settings or using them in other vital ways ("To Be or Not to Be" - 5/27/17). The same is true of the other words listed below. Each has a time and place where it can be useful. DO NOT TAKE ONE LOOK AND SAY:  "Ooo, I have to eliminate every one of those words, never use them ever again, and then I'll be perfect, I'll be a best-selling author, I'll make oodles of money!"

IT DOESN'T WORK THAT WAY!

An author must develop a "feel" for the concept of getting right inside the heads of the persons with the Point of View and letting them show the reader what they are seeing, what they are doing, what they are thinking. You, as author, must NOT stand on the outside and TELL us what your characters are doing. That is the heart of "Show, Don't Tell."

HOWEVER, if you find yourself using a lot of the words below on a regular basis, then you might want to read over what you've written with a critical eye. Are YOU telling this story? Or are you letting your characters tell the story. The first is passive and boring. The second is active and reader-grabbing.

Which is why I've called this a list of WARNING WORDS. Not no-no's to be avoided  at any cost—just words to flash a yellow light, saying "Watch out! Don't fall into Passive 'Tell' Mode."

1.  Was, were.  Perfectly good verbs, if properly used. But if you find yourself writing a lot of
There was . . .
There were . . .
It was . . .
Or sentences like: Betty was afraid . . . John was happy . . .
Those are Warning Signs that you're staying OUTSIDE your characters' heads instead of getting right INSIDE and writing from the Character's Point of View, not yours.

2.  She/he thought . . .  Again do not TELL us what your character is thinking. Identify the character, then give that person's thoughts directly. Example:
TELL:  "She could not like him, Betty thought."
SHOW:  "Betty frowned at Nick. Well aware he was a cheat, she could not like him." (Also note the perfectly acceptable use of "was.")

Numbers 3-5 are similar to Number 2—all perfectly good on occasion, but if you find you're using them often, consider them Warning Words. You're on the outside again, looking in, rather than on the inside, looking out. You are TELLING us about your character, rather than have your character speak directly to the reader.

6.  Then . . . Yet another perfectly good word that becomes a Warning Word only when used too often.

And no, I'm not just speaking to newbies. I stumble over these words nearly every time I sit down to write and have to ask myself:

Is this the best way to say what I want to say?

Yes, there are successful authors who use Author Point of View throughout their books. An example from recent times would be Anne McCaffrey's Dragonriders of Pern series. But in general, most successful fiction authors of the new century are careful to keep Author POV to a minimum in order to give their stories a more active feel. I strongly encourage you to follow the advice of "Show, Don't Tell."

"Show" means getting inside your main characters' heads. Let your readers see what they see, hear what they hear, feel what they feel. But NEVER jump on those Warning Words and say: "Oo, I can't use these. I have to avoid them at all costs!"  "Was" and "Were," for example, are essentials of the English language. They cannot be dispensed with. Instead, understand the reasoning behind the admonition "Show, don't Tell." Understand that it is advice to keep your writing ACTIVE, not a wholesale ban against the infinitive "to be."

SHOW, DON'T TELL =  Keep your writing Active, not Passive. Use interesting details, not a dull recitation of facts. Give at least 90% of your writing the personal touch of your characters and not more than 10% of you*. (Well, of course you wrote the whole thing, but it shouldn't SOUND like it!)

*"ballpark" figures - again, not an absolute but a guideline.

NEVER FORGET:  Author (or Omniscient) Point of View is frequently used in physical descriptions of both people and settings, to summarize events in passage of time, and on variety of other occasions. But since Author POV is "passive," in order to capture your readers' attention, you need the majority of your sentences to be "active."

Get your copy of The Ghosts of Rushton Court now. 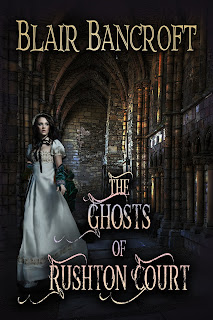 For a link to Ghosts on Amazon, click here.

For a link to Ghosts on Smashwords, click here.

Ghosts is also available from other online vendors.