If you clicked on the recording of the Lake Mary High School's Chamber Choir singing "The First Noel" (posted 12/15/18), you will understand why they were invited to sing at Disneyworld twice this year, resulting in enough passes to take my daughter, three grandgirls, and me to Animal Kingdom. We were accompanied by another member of the choir and friend, plus two Citrus Singers and their mother who have season passes to Disney. Which means I went to Animal Kingdom with two mothers and SEVEN teenagers!

Actually . . . the kids were great. With everyone making sure Gramma (on her rented scooter) was still tagging along. Yes, the holiday crowds were horrible—I was in constant terror of mowing down a small child or bumping a heedless adult, but somehow we made it through the day, not leaving until well after dark, so we could enjoy the magnificent lighting in Pandora, the area of Animal Kingdom based on the movie Avatar. The imagination that went into creating this "world" is absolutely astonishing. Also, the animation is "next generation." Highly recommended.

We could not get onto the Animal Safari until late afternoon, which turned out  to be good, as the animals were gathering to be fed, and we saw more than we ever had before. The lion even stood on his cliff and roared three times. Wow! I'd never before heard a lion roar "live." But one giraffe nuzzling another was the pic of the day. (For the Safari tour, people ride in open trucks - the animals are free to roam.)

So here's your vicarious trip to Disney's Animal Kingdom. Photos by Susie and Riley.

Those who watched the latest Citrus Singer video (the visit to Savannah) will recognize Abby (second from the right, between Cassidy & Riley).

I wanted to see dinosaurs, but this ride turned out to be a wildly jerky thrill ride where our jeep attempted to escape dinosaurs that popped up for about two seconds at a time. Ugh!

Pandora, however, was marvelous. This was our first time in this new part of Animal Kingdom. 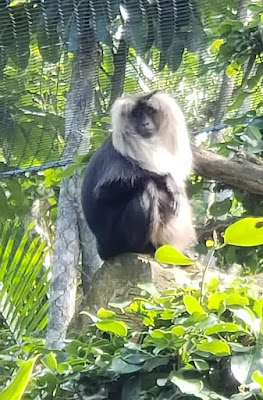 And here it is, Part 2 of last week's "Harrowing Tale." When I went to copy it, I discovered I had added a title.

[Grace note: The story has been slightly revised at the end as I did not make the original as clear as I should have.]

At the end of Part 1, you may recall, all seemed to be well.  The three little girls and I had finally arrived at my house (one hour after leaving the church).  We ate supper and were watching a movie when . . .

Mommy turned her phone back on and called to say that the concert was running longer than expected and could I please take the children home and put them to bed.  I was still nerve-wracked to the bone, but food had helped, so I only twinged slightly at the thought of putting the girls back in the car and driving three blocks.

I loaded everyone back into the SUV and arrived at their gated community a few minutes later.  I reached for the gate clicker I assumed was on the visor, and . . . oh-oh.   No, the girls didn’t know where mama stashed the clicker, but they assured me I could punch in a code.  Alas, I had to tell them that the code only worked until six p.m.  After that, you have to have a clicker or someone has to be at the house to buzz you in.  ( I recalled one memorable evening when my son-in-law climbed the gate, all eight feet of it, at 1:00 a.m.)

“We can go in your car, Gramma,” said the girls.  So we turned around and headed back to my house.  But as I drove toward my house, it occurred to me that if I drove my car, we wouldn’t have the built-in garage-door opener on the SUV.  Without which I’d need a key to my daughter’s house.  And it seems that I no sooner have a key made than my daughter sends someone to borrow it.  So if I drove the girls’ home in my car, we could get through the gate but might not be able to get into the house.

Believe me, at this point if I hadn’t already decided I had a few thousands words to say to my daughter when she got home, this would have been the final straw.

Just as we pulled into my driveway, the 6-year-old said, “Gramma, why don’t you get the clicker from your car?”  I sat there behind the wheel and gaped.  Out of the mouths of babes!  I told the girls to stay put, went back into my house (which I could only access through the front door as my daughter's SUV had no way to open my garage). I pulled the gate clicker off my visor, and back we went to the eight-foot gate. And this time—Yay!—we made it through. We did not, however, use the garage door opener in the car as the 7-year-old was gung-ho to try every key on my ring to see if she could open the front door.  Which she did while the rest of us stayed in the car and watched.*

She yelled for us to come in, and then proceeded to turn on the Christmas tree and the many other Christmas lights throughout the house so I could see them.  A special moment after all we’d been through.

When my daughter and her husband finally got home, the girls were in bed, their halos still shiny, and I laid out the whole tale, woe by woe.  My daughter looked at me and said, “Oh, I’ve been using the hand brake because the car keeps getting stuck in Park.”  Not that she’d told me that any more than she mentioned there was no gas.  I had, of course, been putting the car in Park all night. Sigh.

I’m not sure I’m going to the Singing Trees next year.  The memories of 2010 may haunt me forever.

*This may be why the family changed to a coded lock and perhaps why, when we moved to Longwood, the house key my daughter gave me had a bright pink plastic cover around the top!

Grace note:  The 7-year-old in the story above is Hailey, whose choir singing got us the Disney passes. The 6-year-old is Riley, our budding photographer. Repeating last week's 2018 Reale Christmas photo with ID:

Next week: the debut of The Ghosts of Rushton Court

Background on this latest Regency Gothic can be
found on my Facebook Author Page.