How swiftly they grow up!

With all the truly terrible things going on in the world, I was gravely disappointed this week to discover that polarization, even hate, seems to have affected the last place I would expect: Authors of Romance. (It may be true of other genres as well, but what I saw was on an email loop designed for Romance authors.)

I admit I tend to live in my own little tunnel. I write my books, write my blog, sing in the choir, enjoy Crochet Club, my Author's group, and back to my computer, where I write, write, write. Yes, I recently raised my eyebrows when a romance author tried to copyright a particular word, making it impossible for other authors to use it in a Title. (You've got to be kidding!??) But mostly I stick to my well-trod tunnel, blissfully unaware of any controversies among the many sub-genres in the field of Romance.

Until this week, that is, when I was totally shocked to hear of the treatment one of my fellow Regency authors received on an email loop devoted to Romance in general. Evidently, the controversy began with two articles in our Romance authors' magazine which seemed to imply that authors who did not include "Diversity" in their books, were white supremacists.  This came as a particular shock to authors of so-called Regency Romance, as the theme and setting for that particular sub-genre of Romance is primarily the English nobility c. 1795-1820. When one of our Regency authors attempted to explain the confines of our characters and plots, she was attacked so viciously that she dropped that particular loop.

As it happened, I was publishing The Ghosts of Rushton Court when I first heard about this controversy. And since my a novel includes Diversity, I found myself appalled that someone would think I did it because I thought I should, not because that was just how the plot was for this particular book. I love the freedom of indie publishing that allows me write what I want to write and I often exercise that right to the full, but just as I want to feel free to write about an East meets West conflict in GHOSTS, I also want to feel free to write a book that only reflects the culture of its time. If that is white Anglo-Saxon Protestants, then so be it. I should not be criticized for that any more than an author should be criticized for writing LBGTQ romance, Mixed-race romance, or Romance between people of color, whether of African, Asian, or Hispanic ancestry.

"Romance" is one of the wonders of the world. It's all about LOVE. Yes, we add Conflict, and oftentimes complex plots including Mystery, Suspense, Paranormal, and Science Fiction, but LOVE is still a basic ingredient and Happily Ever After a requirement of our genre. So how can we allow Hate to poison our world? Hatred to the point of spewing it at other authors just because they do not actively promote the same concepts?

As I wrote in my blogs on Civility, I fear overreacting, seeing things only in black and white,is a symptom of our times . . . but in Romance???  Please, please, people, don't taint our genre by warring with each other. Let each of us feel free to write about the world we know (or the world we've spent eons researching). If you think some of us need a nudge toward broader thinking, then by all means say so, but do not turn a simple discussion into World War III. Turning on each other is a shocking action and does none of us any good. Such an attitude also demeans the Romance genre as a whole.

A final admonition: if we accept Hate, it will continue. Its reach will grow broader, permeating every aspect of our lives. If we do nothing, the result may be the same, though a bit slower. But if we protest hate-mongering, if we become advocates for Civility, for a kinder, gentler world, hopefully the World of Authors will return to an even keel, and perhaps add its bit toward smoothing out and stabilizing the more serious issues of our day.


Please don't forget about my newest Regency Gothic,
The Ghosts of Rushton Court. 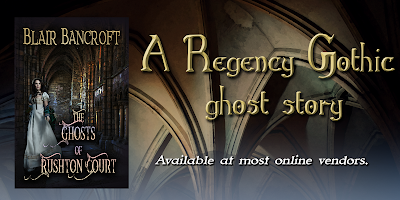