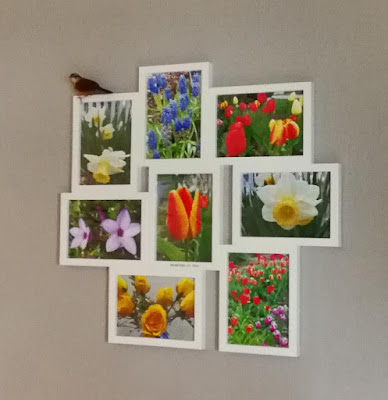 My daughter had a problem this week - two birds flew into her house. This one chose the perfect spot to perch. (Flower photos are by daughter Susie—all, as I recall, taken on a spring trip we made back to Connecticut a couple of years ago. She kept stopping the car to take photos along the Branford/Pine Orchard shoreline, as we hadn't seen any spring flowers since we moved south in 1982.)

We all learned that old rule in school:  "I before E except after C." But, as I keep saying in this blog, there are exceptions to every rule, and some very clever person drove that point home on this great mug shot.

For the benefit of my foreign readers, "Mr. Rogers" is a beloved figure in American television programs for children. Alas, "Mr. Roger's Neighborhood" is no longer with us (it aired from 1968 to 2001). Nor is Fred Rogers, who died in 2003. But I am grateful that my own children benefited from knowing Mr. Rogers during their formative years. (My grandchildren—sigh—did not have that privilege. When we took a boat tour in Winter Park and the guide pointed out the house Mr. Rogers lived in while a student at Rollins College, my youngest grandchild said, "Who?" I'm deeply sorry none of them ever knew Mr. Rogers.)

Fred Rogers came from a wealthy family—hence the lakefront home with room for his grand piano when other college students were confined to dorm rooms. But after graduating with a degree in music composition, he entered the world of making children's lives brighter by presenting them with a loving, caring, soft-spoken person who not only taught them about the world "out there," but loved every one of them, just as they were, while he did it. He wore cardigan sweaters, spoke directly to the children, and never raised his voice. And that was what prompted the editorial in last Sunday's (2/25/18) Orlando Sentinel by Scott Maxwell. The headline:  These days, we could all use more Mr. Rogers.

And in the year we are celebrating the 50th anniversary of the debut of "Mr. Rogers," I could not agree more.

Here are some excerpts from Mr. Maxwell's article:

The world could use a little more Mr. Rogers right now.
Today's headlines are a cacophony of death and division. Shootings, shutdowns, walls and wars.
There was none of that in "Mr. Roger's Neighborhood."
There, the amiable host told us we were special—perfect even—just the way we were.
So, with darkness dominating the headlines . . . .

Mr. Maxwell goes ahead to describe taking the Mr. Rogers Walking Tour set up by Rollins College for this 50th anniversary year. Then he goes on to say:

I admit to being a parent who feared coddling my kids, especially my son. Raise 'em to be tough. Teach 'em that not everyone's a winner and that life just isn't fair sometimes.
Mr. Rogers, however, showered children with unconditional support. And in an age of bullying, shootings and teen angst that too often turns violent, I can't help but think that Rogers—an ordained Presbyterian minister—had it right.
Kids are drowning in insecurities and anxiety that handheld devices foster and flame 24 hours a day.
Mr. Rogers said something that Snapchat and Instagram often don't:  "I like you just the way you are."

Mr. Maxwell points out that Mr. Rogers was the first kids' show to feature a black man in a recurring role. The actor playing the role, who was also gay, calls Mr. Roger's treatment of him and his character an overwhelming experience, "Biblical even."

Those who knew Fred Rogers say his personality was the same in person as it was on the show. Calm. Kind. Interested. A quote from Rogers: "Kids can spot a phony a mile away."

The point to all this, of course, is that our world desperately needs more people like Mr. Rogers. For themselves, and for their ability to spread their world of kindness and goodwill to others.

We live in desperate times. Yes, many prior generations have thought the same. But the capability of countries to destroy each other has never been so extreme, and sadly we seem to have childish playground bullies with their fingers on the trigger.

Mr. Rogers, we need you. We need calm consideration, thoughtfulness, caring about people's lives—ALL peoples, not just "our own." We need to cast out hate, renew the good inside ourselves, and practice whatever version of the Golden Rule your religion embraces. In mine, it's: "Do unto others as you would have them do unto you."

Some people still growl when they hear the word "Hippie," but their best-known slogan of 70s still rings true.