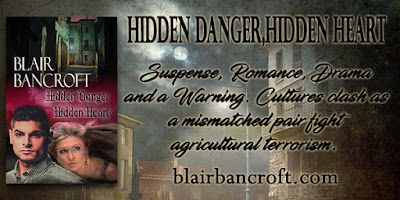 A threat to an organic foods business brings together two people from diverse backgrounds—one from New England and Palm Beach; the other, a tough second-generation Hispanic entrepreneur. Their fight to save the pure foods they grow and sell is complicated by teenage relatives who are being used by a terrorist for his own ends. And also by a culture clash strong enough to resound over two continents. Even if they win their fight against terrorism and corporate greed, their personal differences may be more difficult to solve.

I frequently find my blog topics in what's going on around me—writing, editing, reading, or current events. This week, my inspiration was the ease with which I changed the blurb for Hidden Danger, Hidden Heart. Doing that with a print book? Forgetaboubtit! Although I can only speak for my experiences with Amazon and Smashwords, I assume other e-vendors are also author-friendly regarding changes.

For example, when I decided I wanted to revise the blurb for HDHH, it took far more time to write the new blurb, stew over it, print it, study it, revise it, type up the new version, scowl at it again, tweak it, than it did to make the actual change. At Amazon, all you have to do is click on the three dots next to your book on the Dashboard Bookshelf. Smashwords is much the same. Find your book on the Smashwords Dashboard, choose what portion of your book you want to change, and voilà, there it is, ready for you to play with. With Smashwords, the change seemed to update immediately. With Amazon, it took about half a day. (Changes can include uploading a new version of your manuscript, a new cover, new blurb, new price . . . whatever.)

Although I have used this convenience only a time or two, I consider it one of the great marvels of DIY books. The sense of control is fantastic.

The ability to make changes also gives authors NO EXCUSE for not fixing egregious errors. I'm not talking about the inevitable three or four typos, but about major, in-your-face mistakes or about the sudden lightbulb that bursts on over your head, illuminating something you really, really should have included—or should have deleted.  Don't suffer. Fix it!

What Grace Has Been Reading

I've read an odd collection of books over the last few months—some from favorite authors, who, I'm happy to say, remain favorites. Other authors, found through Bookbub, included some very strange books indeed. I also discovered some new authors, mostly through Kindle Unlimited, whom I have been delighted to add to my "favorite" list. (Not all, I have to admit. Some made it to Archives, almost wholly unread.)

As for "strange," Shogun by James Clavell tops the list. I remember when this book was first published way back when. I did not read it, I did not see the movie. I approached the Bookbub offering in—was it November?—with the curiosity of an avid reader toward a famous book from the past.

I hated it. I hated nearly every word of it. And yet I kept going back, probably just to see how bad it could get. In between Shogun sessions I read a very large number of other books to take the taste out of my mouth. Occasionally, it almost got interesting but never for long. Why was I so offended by a book that is considered a masterpiece? I spent quite a bit of time trying to figure that out. I consider myself a liberal, with very few prejudices. Yet I was offended by several things, particularly #s 1 & 2 below.

1) Clavell's attitude toward women. Here's a dialogue tag: "she added with a woman's sweet viciousness." Yes, the women he writes about are frequently depicted as intelligent and powerful, but figuratively speaking, they are never off their knees.

2) Clavell's attitude toward everything that wasn't Japanese. After the English hero is "conditioned" by his captors, everything European becomes dirty to the point of revolting: men, women, children, government, etc. I would not have minded if Clavell had allowed his hero to enjoy Japanese cleanliness and good manners, but he made it clear both he and his hero had plunged headfirst into Asian culture, to the point of denigrating everything else. While, at the same time, revealing that the men in power in Japan at that time could make Machiavelli's maneuvers look like a straight line.

3) Clavell dwells on graphic torture and on the Japanese solution of suicide for almost any offense. I realize this is something that may appeal more to men than to a female reader like myself. But I found it both gross and inexplicable. Particularly when the hero demonstrates that he has been totally absorbed into the Japanese way of thinking, in spite of one of his crew being boiled in a pot by his Japanese "hosts."

Considering that at the time Clavell wrote Shogun, we weren't that far removed from WWII, I found his total immersion in Japanese culture and his blatant criticism of European culture, just about as offensive as it's possible for a book to be. I will definitely not torture myself with the other books in this series.

So no, I am not recommending Shogun.

Another Bookbub "read": Michael Crichton's The Lost World, Book 2 in the Jurassic Park series. If my memory hasn't failed me, the movie version of this sequel to the blockbuster, Jurassic Park, left a good deal to be desired,. The book, however, is excellent. I strongly recommend it. Crichton writes a remarkable combination of action, science, and human values.

And now the new authors I discovered: Okay, I have to put Michael Wolff at the top of the list. I may not read future books of his, but if they're like Fire and Fury: Inside the Trump Whitehouse, I probably will. Yes, it's non-Fiction, even though some would like you to believe it's fiction. It is also clever and informative, if rushed to press without enough editing. This is a book every U. S. citizen should read. And interested foreigners as well, although it's excruciatingly painful to have outsiders reading about our government's disorganization.


My other two recent discoveries are Mystery authors, one American, one Brit: Robert B. Parker and Faith Martin. Parker's setting is my favorite city, Boston. And Martin's heroine is  a female detective for the Thames Valley police. She lives on a narrowboat, and since I once spent a week on one, traveling from Newbury to Bath (plus having seen the canal in Oxford while traveling through on a bus tour), this too is a setting that tickles my memory. Both authors write excellent mysteries. Parker's private eye hero is, naturally, more of a tough guy than Martin's law enforecement heroine is allowed to be. It should be noted that Martin's books are set firmly in the middle class, not the "upper crust" settings made famous by British mystery authors of the past. The vocabulary alone is fascinating, using a vernacular most Americans will find as mystifying as the plots.  Both Parker and Martin create intriguing characters and clever plots. Strongly recommended.

I learned something this week about how editing disasters can occur. Sometimes it's not the author's carelessness. Sometimes it's their trust in a new editor. This week, when I found an amazing number of errors in the latest book in a series I had read previously with no problems, I emailed the author, asking, "New proofreader?" And the response was "yes" and that the book had already been revised and a new version uploaded. Which brings me back to where I began—the ease with which you can do something like that with DIY e-books.

The lesson to be learned: don't trust a new editor. Check your book that one last time before you upload. You don't want readers to think you disrespect them to the point of placing careless copy before them.
~ * ~

For a link to Hidden Danger, Hidden Heart on Amazon, click here.