The Citrus Singers are proud to announce their video parody, "All About That Badge," has been viewed more than 45,000 times, as of this week. If you haven't seen it, or would like to see it again, here's a link:

To view the video the Citrus Singers made last August, click here.

There are a couple of things that keep cropping up when I'm editing dialogue—sometimes in my own work, sometimes in work by other authors. Problem One is keeping Narration, Action, and Introspection in the same paragraph with the dialogue that's being spoken. Since following the rule about "New Speaker, New Paragraph" is an absolute "must," if you use a separate paragraph for what the speaker is doing or thinking before, during, or after what they're saying, you run the risk of making readers think a new person is involved. Here are some examples:

Excerpts are from Royal Rebellion (on second edit still a long way from final book form):

# 1:
Incorrect:    A minute later Kelan was back, taking her hand and leading her up the steps. As they settled, side by side, on the flat wooden bench at the back of the g'zebo, Yuliya heaved a heartfelt sigh.
"I miss your apartment."
"Things not going well?"

Correct:
A minute later Kelan was back, taking her hand and leading her up the steps. As they settled, side by side, on the flat wooden bench at the back of the g'zebo, Yuliya heaved a heartfelt sigh.  "I miss your apartment."
"Things not going well?"

Grace note: No "tag" is needed for Kelan's dialogue because only the two of them are present.

Tal grimaced, rubbing his forehead, as thoughts of his yet-to-be born daughter chased through his head. This day would come for him too, and he suspected his primary inclination would be to murder the first bastard who bedded his daughter. "Awkward," he murmured. "For us, at least. I suspect Keland and Yuliya are blithely oblivious to challenging the political disposition of the Empire."
There's already one alliance between our families," Rand pointed out. "Perhaps a second is not such a bad idea."

Grace note:  If I had paragraphed after "daughter," there would have been confusion over whether Tal or Rand spoke that sentence. Both are leaders and well aware of the truly unusual nature of this particular romance.
Yes, there's a "tag" for Rand in the next paragraph, but readers should not have to plow ahead, or go searching back, trying to figure out which person is speaking. Clarity is very important in writing.

Looking into Killiri's implacable dark eyes, Rogan believed. He might be unsure about Rand, but there was no doubt about the Psyclid. Here was the enemy.
"I would like to speak with my son alone."

Grace note:  Rogan is the person speaking. But to emphasize the drama, I wanted the sentence in a separate paragraph. And I could do it because context made it perfectly clear who was speaking. Rogan was the only person who could have said those particular words.


#4:
Below is a more complex example that involves Narration and Introspection in one-on-one dialogue between Kelan and Yuliya.

Kelan, who was learning to be as astute about the machinations of people in power as his father and older brother, considered the problem of Rogan Kamal. "If what you say is true, then he could be coming to retrieve a stray, a possible traitor. To do what is right for the Empire, and to Hell Nine with the Kamal family."
"But Erik and I are no longer hostages. He can't force Father to go with him."
Which was true, and pok! The long-sought moments of privacy in the intimate ambiance of the g'zebo were not going as planned.

Grace note: There is Narration, telling readers something about Kelan; then later, we get Kelan's thoughts: his grumbling because he and Yuliya are involved in a serious discussion when that isn't at all what he had in mind. And again, because only two people are present, it is not necessary to use a tag every time - as long as who is speaking is clear.

#5:
The following is a sample of a scene with more than two speakers. In which case, each one requires a tag. (The scene below also covers a number of exceptions to the general rule: a) a remark left "untagged" but quickly clarified in the next paragraph; b) a place where the Prowler's demand for papers is separated for emphasis; and c) another place where the dialogue settles to one on one, leaving no doubt as to who is speaking.)

Grace note: I was surprised when I analyzed the excerpt below to discover it had so much "meat" - examples of both rules and examples of exceptions. It's worth studying.

Twenty minutes later, they were wiping their fingers and their mouths and congratulating B’aela on her inadvertent choice of a culturally themed restaurant. “Too bad we can’t ask the cook for recipes,” Kelan said. “Sure beats Astarte’s kitchen.”
“Fyddit!” Kelan and B’aela stared. No way was Josh’s expletive a comment on the food. “Don’t look! Reg Prowler headed this way.”
“Pok!” Kelan muttered. “Are you sure he’s not a local?”
“You think I don’t know a Reg when I see one?” Josh shot back. “A sergeant in full uniform?”
“Sorry. Wishful thinking.” Kelan shrank into his seat, at least as much as a broad shouldered man nearly two meters tall could manage.
“Smile!” B’aela hissed.
The Reg sergeant paused beside their table. A Prowler’s sole job was to walk the streets of cities and towns occupied by the Regulon Empire and inspect the papers of anyone who roused the slightest suspicion. Or even those who did not. Unremitting intimidation, the eternal threat of arrest was a key element of every Reg Occupation.
“Papers!” the Prowler snapped.
Dutifully, the three visitors to Deimos held out their carefully crafted forgeries. Neither Kelan nor Josh liked the sergeant’s look—openly speculative, and all too appreciative as he reached for B’aela’s papers. Neither did she, but from long experience manipulating Regs, she offered a pleasant, “As you can see, I am the ship’s inventory specialist and purser. Unlike many females,” she added with a touch of wry superiority, “I am remarkably skilled at money matters.” As intended, B’aela’s remarks quenched the lascivious look in the Prowler’s eyes. Evidently, women who boasted of their skill in math held little appeal.
The Reg turned to Kelan who, he decided on a second inspection, looked all too much like his superior officers. Regulon upper crust to the core.  He came close to snapping “Sir,” as he held out his hand for the papers of the perfect Reg specimen—tall, well-built, blond, blue-eyed; this one, handsomely aristocratic.
“You are a passenger?” the Prowler questioned, his suddenly raised voice carrying across a restaurant gone silent—some openly watching, some with eyes down but ears on the prick.
“Just along for the ride,” Kelan agreed with a grin. “My father is head of a consortium that invests in merchant fleets. Every once in a while he sends me out to make certain his ships are doing what they’re supposed to be doing. The man with me”—he nodded to Josh Quint—is, as his papers will tell you, my bodyguard.” Kelan assumed the look of aristocratic superiority he had frequently found useful over the years. Worked every time.
Not this time. If the Prowler had been a private, or even a corporal . . . perhaps he wouldn’t have noticed, wouldn’t have zeroed in on this table. But this was the sergeant’s third Occupation assignment, and this group was just too smooth, too something—maybe too upper class, too intelligent. Better to play it safe—let his commanding officer figure it out.
“I need you to come with me—”
“That won’t be necessary, Sergeant, I know these people.”
The sergeant snapped to attention. “Colonel, sir!”
“Thank you, Sergeant. That will be all. I will handle the situation from here.”
Astonished, Kelan stared as the sergeant snapped off a salute and made a swift exit.        Conversations in the restaurant resumed, masking the Reg colonel’s words as he asked, “May I join you?” Without waiting for a response, he slipped into the empty fourth chair at the table.
“There is a quote from Old Earth,” B’aela said. “From a twentieth century film, I believe. Something about ‘Of all the gin joints, in all the towns, in all the world . . .’”
“Believe it or not,” said Colonel Alric Strang, “they still drink gin here. Seems someone brought juniper berries with them when they colonized this place.”

Grace note:  On the next edit, purely to add more drama, I may separate the paragraph beginning "Fyddit" into three paragraphs. Allowable, if not exactly "by the book."

And please don't forget to take a look at Blair's Suspense tale, HIDDEN DANGER, HIDDEN HEART, which features action from Greenwich, CT and Florida to Spain and Portugal. Terrorism, Immigration issues, and a Romance that suffers from severe cultural shock. 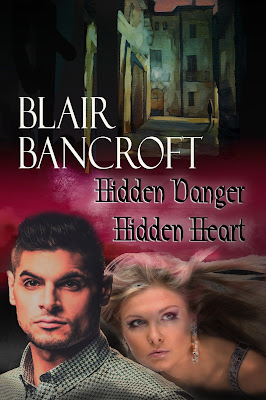 For a link to Smashwords (with 20% free read), click here.