Back to Basics - Punctuating Dialogue

The victims in Las Vegas


The "Low" in our area did not develop into "Nate," but it rained enough to send flood waters back up in low-lying areas. A storm in the Gulf of Mexico did grow into Nate and is poised to go ashore as a strong Cat 1 around the mouth of the Mississippi River around 7:00 p.m. tonight (Saturday). Harvey, Irma, Maria, Nate (and Katia which hit Mexico). Not a good hurricane season in North America.

If a tree isn't blocking a road, crushing a roof, truck, or car, then it's still lying there, three weeks after Irma, waiting until crews get around to cutting it up and carting it off. These two trees are down between a busy shopping center and a lake.(I'm going to keep track of how long it will be before anyone gets around to turning these magnificent live oaks into sawdust.) 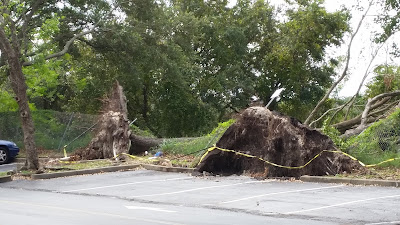 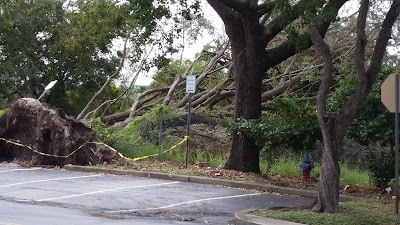 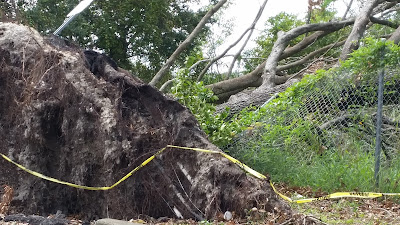 1. Actual words spoken are offset by double quotation marks (in books published in the U.S.).

“All my friends are having London come-outs,” I declared, struggling to keep my voice to a lady-like calm. “Even those who have long-standing betrothals are being allowed to gain a bit of town bronze before they marry.”
Grace note: The only place single quotes are used is within the body of another quote. When you need quotes while writing narration, double quotes must be used.
(Not finding an example of this, I made up a couple.)


Examples:
Mary sighed. "He said quite clearly, 'I will not do it.'"

The word "blithering" is late 19th c., not appropriate for the Regency period.
[NOT 'blithering']

Repeat:  Do not use single quotes anywhere but within double quotes.

The "tag" following a comma (a), question mark (b), or exclamation point (c) begins with a lower case letter.

a.  “That you will not,” he roared back. “The whole county’d be up in arms. Passing over my own kith and kin to leave Blackthorne Hall to a bastard.”

b.  Grandfather and I stared at each other. “You remember?” he asked, his voice no more than a hoarse whisper.

c.  “Now go on, scoot!” she added in a tone that reminded me all-too-sharply of Prudence Cogswell. “The Mister’ll be having an apoplexy.”

2.  Punctuation within a continuous dialogue sentence.

Commas are used to offset the tag within a continuous sentence.

“But now that you’re back,” Grandfather continued, “there’s but one solution."

3. Tags before the quote.

If a tag followed by a comma comes before the quotation marks, the initial letter of the dialogue must be capitalized, just as at the beginning of an ordinary sentence.

I looked him straight in the eye and declared, “Your promise was long ago, Clive."

If your tag is a full sentence, whether in front of the quote or behind, it must be separated from the dialogue by a period.

Right:  “Indeed, my dear, I can show you the letter, if you wish.” Lady Talbert offered such a benign and understanding look that I burst into tears right there in the drawing room.

Wrong:  “Indeed, my dear. I can show you the letter, if you wish,” Lady Talbert offered such a benign and understanding look that I burst into tears right there in the drawing room.

There are several ways to insert a comment into Dialogue. Two of the most common are: a dash (a) or ellipses with separated sentences (b).

a.  “I only know I felt the push. Someone”—or possibly some thing—“was there, but I know not who.”

Grace note: the above is my personal way of using the dash to insert dialogue; there are those who position the dash differently.

When a single speech contains multiple sentences—particularly when there are more than two people present—the speaker must be identified in the first line. Do not write three or four sentences before you identify who is speaking.

“You may speak with Lord Rolfe, Miss Blackthorne,” Miss Marston decreed. “I shall, of course, remain. Any future calls by Lord Rolfe will be conducted in the parlor under the usual restrictions. I trust that is satisfactory to you both?”

Wrong:
“You may speak with Lord Rolfe, Miss Blackthorne. I shall, of course, remain. Any future calls by Lord Rolfe will be conducted in the parlor under the usual restrictions. I trust that is satisfactory to you both?” Miss Marston said.

Although I have seen books where the dialogue is written on a separate line from the character's actions or thoughts, most people find that style confusing. Since change of paragraph usually indicates change of speaker, it can be very difficult to figure out who is speaking. I strongly advise keeping a character's dialogue in the same paragraph with his/her actions and/or thoughts. The only exception - if the speech is long and needs paragraphing to make it more readable.