How to Write a Mediocre Book

Last weekend my daughter and extended family traveled north to South Carolina for Monday's solar eclipse (where totality occurred for 2½ minutes). (I was scheduled to go but gave up my room to my son-in-law's cousin as I'm old enough to have seen the last eclipse.) Oddly enough, the next eclipse will pass over Rosario, Argentina, where both my sil and his cousin were born!

Mike (sil) took some excellent photos which I share below: 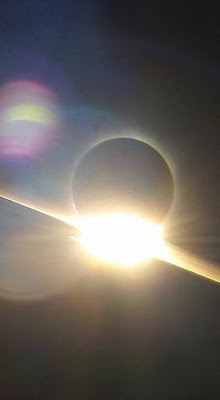 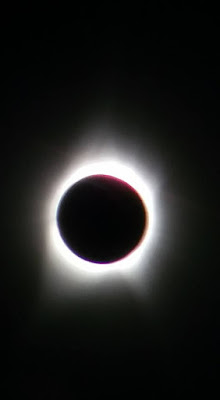 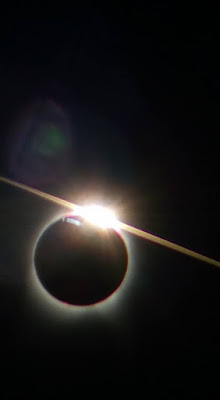 All photos by Michael Reale - using a cellphone with enhanced lens

HOW TO WRITE A MEDIOCRE BOOK

If I were a "plotter," I'd have all my blog posts laid out from now until at least the end of the year. Since I am not a plotter, I admit never knowing from week to week what topic will come next. Even when in the midst of a series, something can crop up, inspiring a post on an entirely unrelated subject. Ah, the joys of creativity!

As many of you know, I frequently get ideas from what I am writing or from what I am reading. This week's topic was prompted by a book I just read, which sparked a thought, reminding me of other books . . .

Puzzle for the week:

How can a book have a good plot with plenty of adventure, well-drawn characters, romantic conflict, a "fresh" setting, apparently sound research, and not be a"page turner"? Put another way, why, when I really wanted to know what was going to happen to these people, was I forcing myself from page to page?

Yes, I'm accustomed to encountering books I instantly recognize as flat-out poor, and sometimes I continue reading so I can use examples from them for this blog, but what could possibly be boring about a book that seemed to have everything going for it?

It wasn't the first time I'd seen this phenomenon. I recall sitting at a booksigning and watching in fascination the long, snaking line (comprised mostly of young people)in front of an author I'd never heard of. So naturally I bought one of her books. And discovered a well-done fantasy "world," good characters . . . and a writing style that was only a couple of steps up from "See Dick. See Jane."

So maybe that was a clue. It still took a while to nail down what was wrong with the book I'm using as an example this week—a book that seemed to have everything going for it—but here are some ways I believe this book went astray.

1.  Sentence Structure.
Okay, I don't think we should wind ourselves in the great convoluted sentences of the most famous nineteenth century authors, but a book composed of a whole slew of straight declarative sentences? Subject, verb, predicate. Subject, verb, predicate. With occasional forays into Prepositional Phrases at the beginning or end. Interspersed with bits of dialogue here and there—and way too "Tell"? (See #2 below.)

In the books I found tedious there was too much "tell"—the narrator (author) standing on the outside describing what was going on rather than getting inside the main characters' heads and "showing" what they see, hear, or think.

Frankly, I thought the "Show" vs. "Tell" battle fought and won long ago, that there couldn't be an author left who didn't understand the challenge of personalizing their story, particularly in romance. And yet . . .

3. Sentence Fragments.
There were no sentence fragments in the books I found "slow." The structure was, in fact, every English teacher's dream. As if each sentence was carefully constructed for a school exam. (I admit some people like this pedantic style. Clearly, I do not.)

4.  Wow Factor.
Perhaps this should be part of Sentence Structure or Moving the Story Forward, but I feel it's important enough for a paragraph of its own. In the books in question I found no sense of surprise, no "hooks" (i.e., cliff-hanger chapter endings). No "Wow!" factor. The story was told - carefully, correctly, even imaginatively, but without a sign of sparkle. And as for humor, not a shred from beginning to end.

4. Keep the Story Moving.
In the books I'm featuring today, I felt no sense of moving the story forward; for example, in the midst of a story of danger and adventure, the tale came to a screeching halt several times while the author described scenes of mere frivolity. Which, in my opinion, detracted from the drama and made the book too long as well.

5.  Dialogue.
The book's dialogue was what I'd call "serviceable." It made sense, it sounded natural. But it was never clever, or humorous. It had no verve, no sparkle. Many of you may be too young to remember the classic TV series, Dragnet. But its classic line, "Just the facts, ma'am," lives forever. And is the perfect description for dialogue that serves its purpose but does not enliven a book. One more factor that slowed the book even though dialogue usually adds interest, not detracts.

At the end of the book, which had already deviated from the plot line too many times, I found a denouement that stretched to infinity. Yes, I like to encourage authors to deviate from the so-called "rules," but I'm convinced that a short denouement is one of the better rules around. This translates as: when your final action scene is ended, wind the book up as quickly and tidily as possible. In a Mystery this is the final chapter where readers learn how the protagonist figured out "whodunit." In Romance, this is often a final romantic scene between the hero and heroine. But whatever it is, do not go on and on and on, providing a waterfall of superfluous words that does nothing but put your readers to sleep. Your book is OVER. Don't shoot yourself in the foot by belaboring a dead horse!

Perhaps my negative feelings about this style of writing are part of being an "out of the mist" author. I value thinking and writing outside the box. I don't want my books, even my historicals, to sound as if I wrote them  as part of a thesis or dissertation. I want my words to sing from the heart. And the heart doesn't always speak in perfectly crafted sentences. Nor does it want someone standing outside the main characters' bodies, describing what they're doing. The heart wants to be right there with him, inside their heads, suffering with them, loving with them, triumphing with them.

Just a few thoughts for all authors to consider . . .

To add your name to Blair's Newsletter, click here.

Next Week:
The remarkable tale of making a
YouTube music video