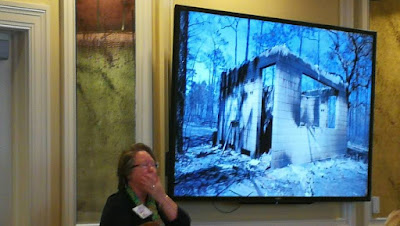 Above is a photo of MaryAnn Barry, CEO of the Citrus Council Girl Scouts speaking on Wednesday afternoon to the Women's Executive Council of Orlando.

Last Saturday afternoon, April 8, a wildfire only about four miles from my house burned eight buildings in a beloved Girl Scout Camp. Around 100 Girl Scouts had to be evacuated, as well as an entire subdivision of homes - though none were lost. (The thanks to the fire department were profuse!) My daughter, Susie, attended the event where Ms. Barry described the tense moments as the drama unfolded and provided the photo above. Even the dock burned! The Scouts are determined that the camp will continue to function, although it may be 18 months before the buildings can be replaced, and half the woods on site are nothing more than charred ashes. My eyes are still suffering from the smoke, which has lingered for days, somehow insinuating itself into my windowless office and refusing to leave. The drought here is extreme at the moment. Last night's TV news reported that there are currently 104 wildfires in the state of Florida, 24 of them more than 10 acres.

Grace Note to my foreign readers: I keep telling you that Florida is a great deal more than beaches, Disney, Universal, Sea World, and the Kennedy Space Center. We haven't paved the state over yet - we have a LOT of trees.

Saturday, April 15:  two more wildfires in our area tonight, 500-900 acres, only partially contained - roads closed & smoke spreading. Though they're 10-15 miles away, I can feel the grit in my eyes. We need rain!

Or should I say, "United, you failed"?


Grace note (Saturday, April 15, 2017): this blog was written several days ago. Since then, United Airlines has opted for raising the "bribe" to get customers to give up their seats. This is such a patently obvious move that it is shocking that no one had the sense to do this before the appalling incident that prompted the following rant.


It takes very little thought to realize that something stinks to high heaven about the way Airlines treat their passengers. The extreme example seen on video around the world this week is only the tip of the iceberg. I’m not sure what has makes Airlines think they don’t have to follow rules known by every business since the first caveman decided to make an arrow for some guy who was all thumbs. What about that classic, "the customer always right"? And those known business generators and gatherers of repeat customers: courtesy and a smile?

It’s been just under a year since I was nearly bumped from a Southwest flight at a changeover in Charlotte when I was on the way to my son’s wedding. Fortunately, someone was “bought off” by the airline and I made it to the wedding. This, when we’d had our tickets for months! And one time when I was changing from an international flight from London to Continental in Atlanta, the timing was tight. My daughter-in-law and her sister ran ahead to tell them I was coming. I was about two-thirds of the way there, when one of them came running back to tell me I had to get there on time or else. The officials at the gate were adamant - and nasty about it. And when I arrived, huffing & puffing, I was yelled at by a security agent. When, totally shocked, I spoke back to him, he threatened to throw me off the flight. Needless to say, I had never been treated like that by anybody in my entire life. When I got home, I wrote to the President of Continental, detailing my experience. I received a phone call from one of the presidential assistants, assuring me that my letter did make it all the way to the top and the matter was being dealt with. Good PR, but I couldn’t help wonder if any actual changes were made.

That was not my last encounter with airport arrogance. One evening a few years ago I was attempting to pick up my son and his girlfriend from Orlando International Airport. Each pass around “Arrivals” was met with irate shouts by security to “go round, even though there were many open spaces along the sidewalk at airlines where no planes were expected. On my third or fourth time around, I spotted my son and his friend; they saw me and headed toward an open space fifty feet down the sidewalk. This time I was screamed at. The guard, arms flailing, insisted I go around again!

I wrote a letter, detailing the incident, to the Chairman of the Board of Orlando International, with a copy to the TSA. I heard from TSA immediately, stating that they regretted the incident but the outside security guards were not part of their agency. Shortly after, I received a call from a woman in the Airport Chairman’s office. She was the perfect person for her job, adept at PR, and highly apologetic. But when she asked permission to use my letter for training purposes, I decided that I just might have made a dent in the system.

Alas, however, I never again picked up anyone at the airport. I made my daughter take over that task.

So naturally the sight of someone being dragged down the aisle of a United Airlines jet just so an EMPLOYEE of United could have a seat set my brain to humming. They had to be kidding! I can only hope United stock keeps on plunging, all the way to the bottom of the Marianas Trench. Could anything have pointed more clearly to the fact that it’s time to change the way Airlines do business?. I’m no PR expert, but it doesn’t take much to figure out possible alternatives to this heinous situation. Here are a few suggestions:

1.  Stop bumping passengers. Better to fly a few seats short of full, depending on Stand-bys to fill the gaps than risk your company’s stock plunging into the toilet due a repeat of the nightmare scene we witnessed this week.

2.  If your CFO whines & says that just isn’t economically feasible (which I don’t believe for a second), and if no passenger rises to the bait (money) being offered when a flight is overbooked, then up the ante ’til they do. Again, it’s way cheaper than the resulting bad publicity.

3.  NEVER bump a paying passenger for EMPLOYEES. Fix up space in the baggage hold, if necessary.

4.  NEVER bump a paying passenger for EMPLOYEES.  Charter a Lear Jet. Pay for passage on another airline.

Why? Because it’s wrong, wrong, wrong. Airlines, you are treating your life’s blood like dirt. You are insulting the people who keep you in business. You are playing arrogant monarch of all you survey, forgetting that the people squeezed into those seats are paying your salary, your mortgage, your kids’ college tuition, your country club fees, your health insurance.

5. No matter which approach you use to the problem, treat passengers with the respect they deserve. They have paid you money to take them where they need to go. They are trusting you with their lives. They deserve respect, courtesy. And a safe journey.

They do not deserve to be yelled at, denigrated, manhandled, punched, or dragged down an aisle. Yes, unruly passengers happen, but too many times perfectly innocent people have been ejected from airplanes by those who have let a little power go to their heads.

We deserve better. Much better.

To United, and all the other airlines out there . . .

Kindly remember it’s ordinary people like me who keep you in the air. If you don’t shape up, some airline is going to come along that remembers that Rule One of every business is: The customer is always right. And that’s the airline all of us will be flocking to, for good Customer Service is what makes businesses grow and thrive. They certainly don’t do it by dragging 69-year-old passengers down the aisle, dripping blood!

I had already vowed never to fly Southwest again. I now add United to my blacklist.

I debated with myself whether or not to add the following, but I think it has to be said. This is too serious a matter to gloss over. The ultimate end of tolerating petty dictatorship is loss of individuality, loss of freedom. Loss of respect, honor, and our personal responsibility for the fate of others. It is Tyranny, plain and simple.

There are certain people to whom a whiff of authority goes to their head. It’s that old, “Give ’em an inch, they’ll take a mile” philosophy. We see instances of it almost every day on the evening news. At its most foolish, it’s the guard who screamed at me at the airport. At its worse, it’s the guards who shoved people into the “showers” at Dachau and Buchenwald.

'Ware tyrants, in whatever form! Our ancestors came to this country to escape tyranny, and look what’s happened. Don’t accept it. Do not roll over and play dead. Protest! Write a letter, an e-mail. Make a phone call. Or shout,  “I’ve had enough. I’m not going to take it anymore!” Never forget: Not protesting is what gives tyrants power.