While Hailey, Riley, and Cassidy were rehearsing for a musical, Mommy had to be the Girl Scout selling cookies at her Real Estate Investors' meeting! Please note the double pony-tails & Scout bandolier.

My cousin in California shared this photo taken by Steph Ball on Highway 88 in California. Oh, the joy of living in Florida! 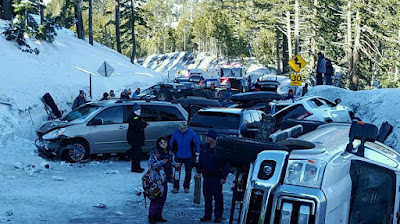 For the most stunning photo I've seen on Facebook in a long time, here's Sunset Through the Trees by Francis Broadrick. 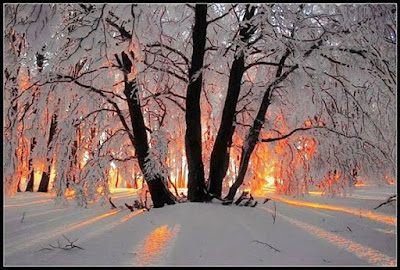 PYTHON UPDATE.
The Big Cypress Wildlife Management Area and several other areas in the Everglades have been closed to the Python hunt due to high water levels. The hunt continues elsewhere. The count as of February 6, 2016, is 90.

Grace note: this week I'm continuing examples of ways in which characters need to change and grow to keep them interesting. The characters are from my new SyFy series, Blue Moon Rising (Book 1, Rebel Princess, expected out soon from Kindle Scout).

K'kadi Amund.
K'kadi is the bastard half-brother of Kass from last week's blog (the princess turned rebel). When K'kadi is first seen, he's nineteen, definitely odd—in our century we'd probably consider him autistic. He speaks only through illusions which he creates out of thin air. He is easily distracted, unreliable, quicksilver when the rebellion needs steel. He loves to scatter smiley faces and fireworks over people's heads. In spite of Kass's efforts to teach him discipline, near the end of Rebel Princess, he disgraces himself by allowing compassion to overcome duty, dropping the invisibility cloak of a rebel shuttle right under the noses of the enemy. In Book 2, Sorcerer's Bride, K'kadi's powers begin to grow—resulting in not only bigger and more dramatic illusions but what appear to be visions of the future. The problem is, no one can be certain if he's displaying fact or fantasy. Matters are also complicated by his falling in love at first sight with his mental opposite, a female warrior who considers anyone with his kind of magic—even if only makes pretty pictures—a monster. Because his attitude toward the girl from the planet Herculon verges on stalking, his brother-in-law orders K'kadi to endure military-style basic training. The ruthless discipline helps, but it's only at the end of Book 2, with the near death of Psyclid's rebel leaders, including his half-sister M'lani, that K'kadi finally begins to get a grip.


However, Book 3, The Bastard Prince is his. Yes, K'kadi must share the pages with Tal and Kass, but late in Book 2 he has progressed to "silent speak," an abbreviated form of silent communication which is a dramatic step up from being forced to communicate solely through illusions. He is older, taller, stronger, and much more powerful. He experiments with different talents, perfecting Kass's own gift of telekinesis. He has learned to "cool" his passion for Alala, the warrior, even as he unashamedly uses his gifts to peek at Tal and Kass in bed. (Just so, you understand, he won't make a fool of himself when his day comes.) Although The Bastard Prince is a work in progress, it's easy enough to see that K'kadi has grown and changed a great deal. Hopefully readers will also anticipate that there's far more to come. (I need to remind myself to add hints that he's not infallible. Our boy just might slip up again sometime, because, after all, there's always Book 4.)

Princess M'lani, Kass's younger sister.
M'lani is much more the classic princess than Kass ever was. She never longs to leave home and explore the universe. She first appears at the end of Book 1, when she volunteers to stand in for Kass as bride of the Sorcerer Prime, Jagan Mondragon. Though she is hurt by his seeming indifference to her magnanimous gesture—which will keep Jagan in line to be the next king—she is always aware that she is making a marriage of convenience, a far cry from the love match between Tal and Kass. Unlike the other members of her family, M'lani has displayed no psychic talent of any kind. She is, however, a pacifist like her father. And yet after enduring five years of Reg occupation and learning about her sister's role in the rebellion, she does not balk at being drawn into Jagan's assignment to organize Psyclids against the Empire.

On the one hand, M'lani must struggle with her engagement to Jagan, whose prime assistant is his long-time mistress. On the other, she must cope with the dramatic appearance of a personal psychic talent that is diametrically opposed to her strict pacifist upbringing. She must also act as arbitrator between Jagan and the local rebel leader, who clash at every turn. All major challenges for the sheltered princess who has never been farther away from home than royal family's former vacation site, Blue Moon.

As M'lani is drawn further into the rebellion, on the night of her marriage, she uses her Gift of Destruction to help Psyclid hostages escape, killing ten Regs in the process. And breaking the strongest tenets of her upbringing. She is a torn soul. Even after being arrested and beaten by the Regs, she maintains her desire to take back Psyclid without shedding blood. Which eventually happens . . . except just as it's over and everyone is celebrating, it's M'lani's blood that is shed. Jagan's as well. And finally, in near death, they find each other. Neither a strong patriot to begin with, M'lani and Jagan are now the hero and heroine of Psyclid Freedom Day.

Jagan Mondragon, the Sorcerer Prime.
Jagan is the most difficult character in the series. He's arrogant, egotistical, and comes very close to being an abject coward when we first see him, as at the first sign of trouble on Psyclid, he ran as far as he could get. He has a mistress, but he's clung to notion of marrying Kass long after she's told him she has a different life in mind. We get the idea he's returning to Blue Moon only because Kass shames him into it. Gradually, Jagan redeems himself, proving his sorcery a major weapon for the rebellion, yet even when he becomes a main character in Book 2, he remains difficult—agreeing to marry M'lani out of expediency, quarreling with the local leader of the rebellion, his arrogance continually getting in the way of Happily Ever After, whether for M'lani and himself or for Psyclid. Yes, he's mellowed, he's discovered he's married to the right sister, but he's never going to be easy to understand. And that's okay. Change doesn't mean that your characters have to do a complete about-face.

B'aela Flammia.
(Hard to write about B'aela without a "reveal" that's a complete spoiler, but here goes . . .)
B'aela is a witch and a pragmatist—Jagan's chief assistant and long-time mistress. She is highly intelligent, worldly, and perfectly aware she will someday be replaced. After all, Jagan has been engaged to Kass since they teenagers. Although a minor character in Book 1, B'aela comes into her own in Book 2, becoming a weapon of war in more ways than one, taking a new lover, and just perhaps finding an attraction that may become more permanent. By the end of Book 2, we realize she has become a major player, although the resolution of her love life will take as long as the resolution of the rebellion. B'aela is a good example of a minor character who insists on blossoming into something far more than she was intended to be. (One of the reasons I'm an "out of the mist" author instead of tied to an outline.)

A Grace note on Secondary Characters.
For the most part, secondary characters are allowed to remain themselves. The wise old gramma, the grumpy grampa, the BFF, the best buddy, the good boss, the bad boss, the charming child, the whining child, etc. These come in many shapes and forms and mixed personalities. They provide color, contrast, and someone for the h/h to bounce dialogue off of. BUT keep in mind that making these characters too complex can result in them overshadowing your two main characters, so that's a no-no.  Concentrate on making them fulfill their roles, but keep the "growing & changing" to a minimum (unless it's an essential part of the plot).


Summary.
Whatever kind of romance you're writing—Contemporary, Romantic Suspense, Paranormal, Futuristic, Inspirational, etc.—creating three-dimensional, interesting main characters who change and grow is essential. The basic lesson remains the same: Introduce your most important characters with a strong "description" -  whether physical, mental, or both - and build from there. Make them characters your readers can love or hate, then show us why. Show us there's more to these people than we thought, that they're capable of learning, growing, stumbling, coming back from adversity to be something more than they were before. That's life, that's humanity. Without it, your characters are merely cardboard, not more fleshed out than a child's stick figure.