My daughter shared this on Facebook - no idea where it originated, but it's certainly found the right home on Mosaic Moments. (I would suggest that the sentiments expressed are indicative of the type of people who failed to acquire good manners as well as good English while in school.) 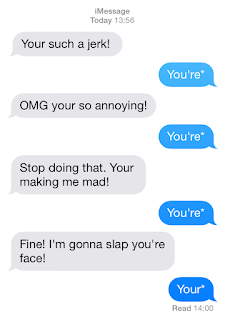 For my foreign readers who might be having trouble interpreting the above. The all-too-common mistakes are on the left. The correct use of "your" and "you're" (you are) is in blue on the right.


Alligator Update.
Visitors to Florida - whether from "up north," "out west," or international - seldom have any concept of Florida other than our beaches and themed attractions in Orlando. Which is why I try to keep my readers updated on happenings that show just how wild so much of Florida still is. The veneer of civilization is truly thin. (Anyone who has read my "Golden Beach" books knows it is a less than 10-mile strip along the edges of our peninsula, with a few inland cities, like Orlando, thrown in for good measure.) I lived 25 years on Florida's Gulf Coast, where we had so many alligators no one would even consider swimming in fresh water. (Two children, an adult male, and innumerable pets were lost to gators in our area during my time on the Gulf Coast.)

When I moved to Orlando, I was astounded to discover people actually ventured into lakes they knew they were sharing with gators. And, as you've seen on Mosaic Moments, this can lead to trouble. On Sunday a 61-year-old man, a swimmer highly experienced in the waters of Blue Springs Park about 30 miles northwest of Longwood/Orlando, was pulled under by a gator and drowned. The first alligator fatality since 2007. The 12-foot gator was later shot and killed.

The newspaper reported 22 fatal alligator attacks since 1948, 338 alligator bites (which would include the woman who lost her arm within a couple of miles from my house earlier this year). And by the way, when we ate lunch this weekend at Snook Haven on the Myakka River (10 miles east of Venice on the Gulf Coast), there were large signs saying, "Beware of venomous snakes." (When I moved to Venice in 1982, rattlers regularly sunned themselves on some of our less-traveled roads.)

The moral of the story: when you venture off the beach or out of a well-manicured theme park, take care. Gators, bears, rattlers, moccasins, oh my! They're not figments of Walt Disney's imagination. (We have a lot of deer, raccoon, and possum, too, but we don't consider them a menace. Unless you feed them, that is. In East Orlando - in a typical modest suburban community - a possum regularly entered my house through the cat door and helped himself to the cat's kibble. I finally had to seal the cat door.)

Bear Update.
Today, Saturday, October 24, is the first day of Florida's first bear hunt since 1972. Against vociferous protests, even from those who live in active bear country, the Florida Wildlife Commission's answer to three bear attacks on women last year is a hunt that most say will do nothing to keep bears from searching for food in trash cans the government refuses to replace with sturdier "bear proof" cans. If anything, I suspect it may drive more bears out of the deep woods and into people's backyards. The situation, as the hunt opens, is so controversial that the FWC has assigned monitors out in the field and law enforcement officers at tag stations where protesters are allowed to gather. (Hunters are required to bring their kill to a tag station. Overall quota for the hunt: 320.) FWC has even e-mailed every permitted hunter to advise them to be respectful of each other and of the protesters. If confronted, hunters are told to, "put your best foot forward and avoid engaging with them." More on the bear hunt as it develops.

Sat. Night Addendum - from the 11:00 p.m. news:
207 bears were killed across the state today. Central Florida met its quota of 99 bears and FWC has closed hunting in our area. Also in the Florida Panhandle. North and South Florida zones remain open for hunting until the overall quota of 320 bears is met. Hunters keep insisting the bears needed culling, but frankly, the sight of bears being brought in stretched out in the flatbeds of trucks was pretty sickening.

Ellipses.
The "modern" compression of the ellipsis is one of my pet peeves. I like to use an ellipsis in my writing to indicate a pause - in dialogue or simply in a person's thoughts. When the classic ellipsis is reduced to three periods, one right next to the other, the significant pause becomes more like a hiccup. It simply does not serve the function for which it was intended. And yet, just because Microsoft made a code for the wrong way to write an ellipsis (Ctrl+Alt+.), everyone seems to think that is how it should be done. I've even heard the excuse that the three periods close together work better in e-books. Don't believe it. Those wide spaces between words are going to happen, no matter which way you write the ellipsis. In summary, all I can say is, Please God, don't let programmers at Microscoft, who did not major in English, tell us how to write.

Grace note:  If you absolutely, positively must use those squeezed periods, please put a space on either side so it at least looks close to a pause instead of a typo from someone's fingers left too long on the "period" key. Or nothing at all because the eye skips right over those teeny little squeezed-together periods.

A correct ellipsis has a space before, between, and after each period.

Example from The Welshman's Bride:
“Everyone says . . . well, missus, they say Gruffydd would do anything for Mrs. Gwendolyn."

2.  Ellipsis - used as a pause. See example above.

3.  Ellipsis -used  to indicate a voice or thought trailing into silence, or into another thought

Grace note: In non-fiction writing, the ellipsis is used to indicate portions of a quote that have been omitted, and there are occasions when the ellipsis is followed by a fourth period without a space between. Since my Writing & Editing posts are primarily intended for fiction authors, I am not going to confuse you by getting into this use of the ellipsis. Just keep in mind that in Fiction ellipses are three periods, plus spaces. Forget the four.

As I began to scribble down the different ways to use a dash, I realized the ubiquitous dash should wait for its own blog. So we'll leave it for another day.