A Special Request from Grace:
I uploaded the first book of a SyFy (Futuristic Paranormal) series to Amazon's new Kindle Scout publishing program, not realizing I was supposed to use social media to request "nominations" for my book to be published. Definitely one of life's embarrassing moments, as that's just not my style, BUT the Scout program actually offers advance payments to authors, as well as royalties (something that's been lacking in e-publishing), so I'm gritting my teeth and asking my blog readers to go to the link below, read the first 5000 words of Rebel Princess, and - unless you hate it - nominate it for publication by Kindle Scout. Thank you, thank you!
Link to Excerpt

Gator-bite update: The woman in the photo below is the professor at Rollins College (earlier reported as UCF), who lost her arm to an alligator here in Longwood last month. She is planning to return to the classroom in January.
Photo is scanned from The Orlando Sentinel, September 26, 2015. Good luck to a brave lady! 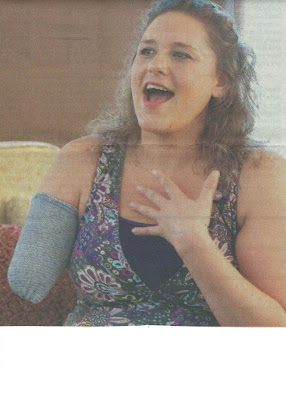 
Although this week's Copyediting Challenges can be confusing, they are not as open to interpretation as some of the previous examples. Most of these are cases of "right" and "wrong," with little wiggle room for subjective decisions. But you'll see from my notes that few rules are truly cut in stone.

I personally find the choice between "that" and "which" one of the most difficult choices to explain, even to myself.  But before I even try, please remember this:  Many times the word "that" simply gets in the way.  If you can eliminate "that" and your sentence still makes sense, then get rid of that pesky four-letter word.


Example from The Chicago Manual of Style:
The book I have just finished is due back tomorrow.

Use "that" - if necessary - when the "that" clause is essential to the meaning of the sentence.

Example from CMS:
The report that the committee submitted was well documented.

Grace note: Personally, I'd eliminate the "that" in the above sentence. It's not needed, as is often the case. Check all your "that" clauses, asking yourself if "that" is really necessary.

"Which" is used when the clause can be left out without changing the meaning of the sentence.
Examples from CMS:

The report, which was well documented, was submitted to the committee.
The book, which I finished last night, is due back tomorrow.

You've written a sentence where the "which" clause is essential to the meaning. Ah-hah! Take another look. Maybe it should be a "that" clause.

Grace Note:  As a good example of just how tricky "that/which" can be, the last example above could also be written as: The book I finished last night is due back tomorrow. Thus eliminating both "that" and "which." It might not be "literary" English, but it's perfectly acceptable in both fiction and non-fiction - except perhaps to the most persnickety English professors and authors with aspirations toward writing "literature" far above the tastes of the most of the general public.


2. That vs. Who.
While we're on the subject of "that," I have to bring up one of my own pet peeves, even though it seems to be a lost cause, with even newspapers and TV reporters using "that" when it should be "who."

"That" refers to places and things.

"Who" is used when referring to people.

To use a comma or not? This seems to be a truly subjective decision based on whether or not you, as the writer, feel a pause or not.  The general rule, however, is that if you use one comma, you need to use two - enclosing the clause on either side. [Please note the use of "that" in the previous sentence. This is a case where the sentence would not read right if "that" is eliminated.]

Examples from CMS:
We hoped the mayor herself, not her assistant, would attend the meeting.
They marched to Washington, not only armed with petitions and determined to get their senators' attention, but also hoping to demonstrate their solidarity with one another.

They were armed not only with petitions but also with evidence.
She decided not to march but merely to collect signatures.

A comma should be used between clauses using these words but not between really short phrases.

Examples from CMS:
The more I read about Winterbottom, the more I liked her.
The less you eat, the better you'll feel.

The more the merrier.
The sooner the better.

Quote from The Chicago Manual of Style:  "A word, abbreviation, phrase, or clause that is in apposition to a noun is set off by commas if it is nonrestrictive." In other words, if it can be omitted and the sentence still retain its meaning.

Examples from CMS:
The committee chair, Gloria Ruffolo, called for a resolution.
Stanley Groat, president of the corporation, spoke first.
My older sister, Betty, taught me the alphabet.

My sister Enid lets me hold her doll.

And sometimes the appositive contains a conjunction. Example from CMS, 15th ed.:

The steward, or farm manager, was an important functionary in medieval life.

More challenges to come, although sometime soon I hope to get my trip pictures downloaded and will begin sharing those.