We had a grand time last Saturday afternoon fulfilling a long-promised birthday present to Riley. We went airboating on the St. John's River, which included not only gators but two half-grown bald eagles, a myriad other birds, including egrets, great blue herons, and gallinules. There was also an amazing number of cows and calves grazing along the flood plain. We also visited a cypress swamp, a surprise as I had not known we had one here in Central Florida. All in all, a real treat. And, oh yes, Midway Airboat Rides (about ten miles west of the Kennedy Space Center) also has its own "zoo," including a pet pig named Porkchop who simply lay on the screen porch doing his best to keep visitors from closing the door without hitting his snout. As an extra added attraction, in the distance we could see the Blue Angels performing somewhere along the coastline near Titusville. 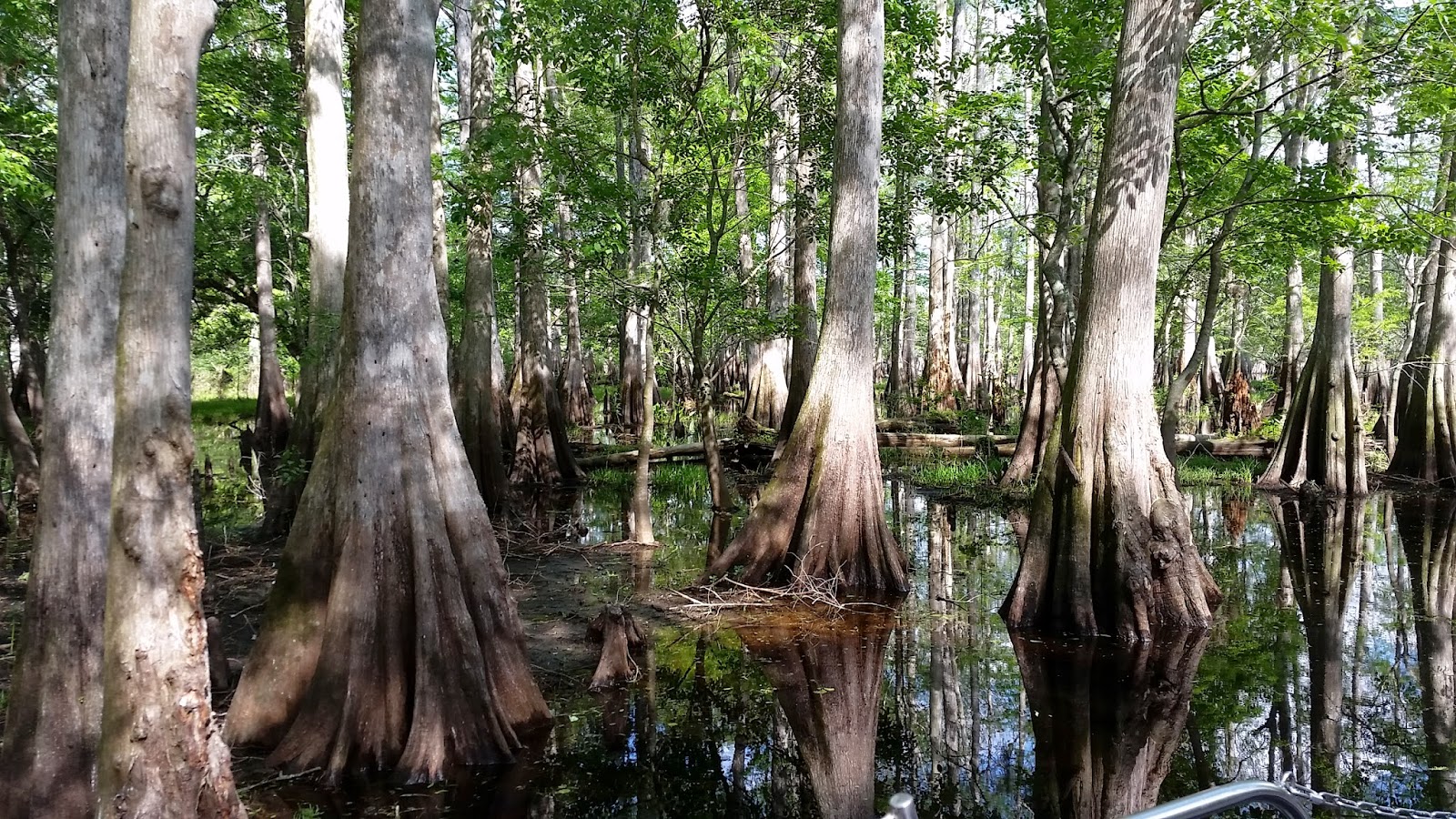 More Examples of Settings That Work


Grace Note:  All examples below are opening paragraphs.

From Rogue Spy by Joanna Bourne:

The end of her own particular world arrived early on a Tuesday morning, wrapped in brown paper and twine, sealed with a blog of red wax. She found it at the bottom of the pile of the morning's mail.
She sat at her desk in the library, pleasantly full of breakfast, opening letters, ready to be brisk with the contents. Camille Leyland—Cami—dutiful niece, British subject, codebreaker, French spy, read to deal with the morning post.
The Fluffy Aunts didn't believe in opening mail at the breakfast table. "A barbarous custom," Aunt Lily called it.
Books filled the room she sat in and most of the rest of the substantial cottage. They ran floor to ceiling along every wall of the front parlor, the entry hall, the back parlor, what had originally been a bedroom, and this little study at the back of the house. Books, plump with pages of notes and bristling with bookmarks, stuffed the shelves two deep and wedged in every available space on top.

So what do we learn from the above? The author could have said merely that Camille Leyland, who lived with two ladies she called "the Fluffy Aunts," encountered her doom while opening the morning mail. A fairly dramatic opening without all the embellishment. But instead Ms Bourne brings the scene to life by mentioning such details as it being a Tuesday morning, how the item was wrapped & where she found it. She then introduces the main character by name and by revealing in just a few terse words that this is no ordinary heroine. And then a dash of dialogue from "the Fluffy aunts." Followed by a description that leaves no doubt that Camille is not the only intellectual in the house. Ah-ha. It would seem the aunts might not be so fluffy after all. Colorful description and character introduction - and all in four very short paragraphs.

And let's not forget the Paranormal.

From No Ghouls Allowed by Victoria Laurie:

"This is where you grew up?" my boyfriend, Heath, asked me as our van came to a stop.
I stared up at the large plantation home of my childhood and tried to see it through Heath's eyes. The stately six-bedroom, five-bath home sat atop a large hill that I used to roll down when I was little. I had found such joy rolling down that hill. And the grand, ancient sixty-foot oak tree that dominated the far right side of the yard, where I'd had a swing that I used to ride for hours. And the long wraparound porch where I'd spent lazy summer days cuddled up with a good book and glass after glass of pink lemonade.
Of course all of that was before my mother died. Before all the joy went right out of my life and right out of that house.

Here we have a classic house description, yet it doesn't linger on details - just enough to paint a picture of a plantation house not much different from everyone's vision of Tara. We learn that our heroine has a boyfriend, she had a happy childhood, and then the zinger about her mother makes it clear this is not a simple romance and that her mother may possibly play an important role in this tale of the paranormal. In addition, those who have read the previous books in this series instantly recognize that her boyfriend could also be a problem as he comes from a much more humble background. An amazing amount of information in six sentences.

From T's Trial by Kay Sisk:

It was the music. Always the music. It started somewhere deep in his soul and coursed through his body in a mad rush to explode on the surface. He had felt it as a small child, this urgent need to touch the piano keys, to hear the notes, to reach inside the old upright in his grandmother's parlor, close his eyes and feel the strings and make the vibrations. To release the music from within himself and then take it back inside, remold it and start all over again.
He felt it now. Eyes closed, hands splayed on a keyboard, his foot pumped, his head moved, his body swayed. He felt the music, was the music and both started and stopped with the music. Smoke, lights, crowd, video screens, revolving stage—all enhanced his music, helped others feel it. But no one knew the music as he did. No one was the music as he was.

This is a different kind of Setting. A Character Introduction that is also the Set-up for the Plot and the Set-up for an entire Series.  In the next few paragraphs things go rapidly downhill, projecting "T" and readers into one of my favorite series, tales of a Rock Band vs. a downhome Texas town, stories rife with humor, anguish, and love.

Although the opening rock concert setting above is not used again, the powerful description of how much music means to "T" is the driving force behind the book. Therefore those opening paragraphs set the tone for the book, making them a different kind of "Setting."

From The Hot Zone by Jayne Castle*:
*aka Jane Ann Krentz

The dust bunny was back.
Sedona heard the soft, muffled chortle and rushed to the barred door of the small, windowless chamber. The lab was deserted for the night but there was ample illumination. The Aliens had vanished a few thousand years ago but they had built their maze of underworld catacombs to last. And they had left the lights on. The quartz walls of the small cell and the chamber that housed Dr. Blankenship's research equipment glowed with an acid-green radiance.
Because of the constant light it was impossible to tell whether it was day or night up on the surface, but she was pretty sure it was night because Blankenship's two seriously bulked-up assistants had left a while ago, talking about dinner.

In these opening lines of yet another book in her Ghost Hunter/Rainshadow/Arcane series, Ms Castle immediately mentions one of the series' favorite characters, a dust bunny, catching readers' attention whether they know what a dust bunny is or not. She then offers hints that our heroine might be in trouble, while at the same time sketching in a brief background of the far away planet now inhabited by humans that has been the setting for her multiple SF series.  And as in T's Trial, this opening scene is highly significant to the plot. And again, Ms Castle does all this in just a few sentences.

As you've seen in the two blogs on Setting, a Setting can be more than a simple description. My editing clients and those whose contests I've judged already know that I'm a great believer in Identification, in making sure you give your readers the classic Who, What, Where, and When right up front. (You can, however, take the rest of the book to explain the Why.)

Below is a list of four types of opening Settings. There are more, of course, such as the all-action-explain everything-later scene and the all-dialogue-explain-everything-later scene. Frankly, most of the time these openings make me gnash my teeth in frustration. I don't like not having the slightest idea what is going on, not knowing who these formless people are, etc. Use these opening approaches only if you can do it really well and don't drag the confusion out too long. Personally, I recommend one of the following Settings to open your book.

1.  Paint a Picture. This covers the WHERE and WHEN. Using color and style, offer readers enough description to intrigue their interest but not overwhelm them.

Note:  This kind of description can also occur anywhere in a book where added color will enhance the story without slowing it to a crawl.

2.  Setting with Character Introduction.  This is the WHO, an absolutely vital ingredient in any story. Ideally, the opening paragraphs of a book provide both physical setting and at least a peek into the personality of one of the main characters.

Note: Opening a book in the Point of View of a secondary character almost always leads to disaster.

3.  Setting with Plot Hint.  This is the WHAT.  You see an example of this in Ms Laurie's No Ghouls Allowed.

Note:  The best openings usually include a combination of 1 and 2 or 1 and 3. (Or as in the Jack Higgins' example from Settings #1, all three of the above.

4.  Setting with Ambiance (Atmosphere).  This is also a WHO. In the case of T's Trial, we see straight into the hero's soul. Though the description is amorphous, it provides an atmosphere intriguing enough to inspire readers to keep going in search of more concrete details. In only a few paragraphs, this scene sets up everything that happens, not only in this book but in the rest of the books in the series.


So what does an author need to do to create a good Setting?

Create the Setting that feels right for you, but as you do it, ask yourself:

Have I  identified where my characters are, and indicated when? (Painted a colorful but not lengthy sketch of the backdrop & set it into the proper time-frame.)

Have I identified who my characters are? (No talking heads against a blank backdrop, please.)

Have I given a hint of personality about at least one main character?  (More Who.)

Have I given a hint of the plot? (Not absolutely necessary to include the What in the opening paragraphs, but great if you can get it in there.)

Have I written a great action scene but left my readers totally confused without so much as a hint of Who, What, Where, and When?

Have I written a lot of clever dialogue but left my readers totally confused about the W-W-W-W?

I hope these two blogs on Setting have been helpful. If you have any questions (or arguments), please don't hesitate to Comment.