On to Madrid and the Palacio Reale.

Below is a postcard, plus a personal photo, of the Royal Palace, where it's said guerrilla warfare was born when a thirteen-year-old prince refused to leave the palace when the French sent Mameluke guards to take him into exile—a move that incited ordinary citizens to revolt against their former allies. Although the revolt was swiftly put down, the spark lit in the Plaza de Oriente on May 2, 1808, would help turn the tide against Napoleon (and encourage Britain to send troops to the Peninsula), although it would be five long years before the French were finally driven back behind the Pyrenees into France.


Set on a mountaintop surrounded on three sides by the broad Tagus river, Toledo has remained almost unassailable through the centuries. It is the famed home of the Toledo blade and the Alcázar. The fortress was built in Roman times and nearly destroyed in a siege during the Spanish Civil War (1936). It has been rebuilt and is now a museum. And, yes, Toledo craftsmen still make swords and knives of every description.

Below, the Venta Quixote, a 16th c. inn Cervantes used as a setting for Don Quixote. (Their pea soup was amazing!) And, yes, they still have windmills in the area, although they were too far away for a good photo. (And I do mean windmills, as in Don Quixote, not modern wind turbines, which we also saw all over Spain.)


The Alhambra, one of the great wonders of the world, is indescribable. I post here only a tantalizing bit of the whole, which includes many cats (our guide brought cat kibble to distribute to the grateful population). The only ugliness in the Alhambra are some great stone fortifications left from Medieval times when Crusaders occupied the Alhambra. (There was also some destruction when French soldiers in Napoleon's time attempted to blow up part of the sprawling palace.)

The palace fountains, pools and waterfalls are naturally fed from water on the hillside above. There are also extensive formal gardens on the hillside. (I did not attempt the climb.)


After leaving the Alhambra, we nagged our guide and driver to let us have a close-up of olives growing - olives are the main crop assigned to Spain by the European Union. And finally our bus sneaked off on a back road and we were given ten minutes to wander through the edge of someone's olive grove. 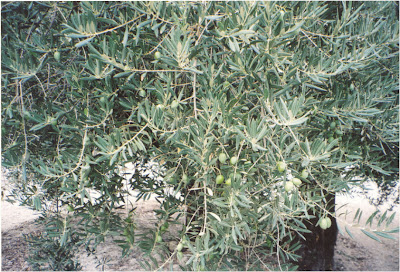 My favorite photo in Seville wasn't the cathedral or even the incredibly narrow cobbled streets and ancient houses. It was a garden I found by peeking through iron bars set in an open window - and discovering a fairyland, a private garden taking up all of a small courtyard in the center of a three-story residential building. It was exquisite - and carefully tended. I only wish I could have gotten a better angle through the bars to show more of it.


And with a look inside Seville's great cathedral, we say goodbye to Spain - though not to the Iberian Peninsula.