For a bit of holiday cheer and a very special moment (and no, that's not just Gramma talking), click on the video link below.

From YouTube - my grandgirls doing "The Cookie Song" with Girl Scout Troop 1668 (Junior Scouts & Brownies) at the Orlando Museum of Art on Sunday, November 17. The cookie parody to the tune of "The Twelve Days of Christmas" was written by my daughter Susie, who also directs.


Special Note, added March 24, 2014: Belle has just become part of a Limited Special Edition, which features Book 2 in The Aphrodite Academy series, Cecilia. And "Rayne Lord" has been nixed in favor of Blair Bancroft. This special edition will be offered at a price reduction on Kindle Countdown.

I too have been busy this week, uploading a new genre under a new pseudonym. Belle is Book 1 in The Aphrodite Academy series. The new pseudonym is due to not wanting to shock any of my tried and true traditional Regency fans. For cover, blurb, and Author's Note, please see below. 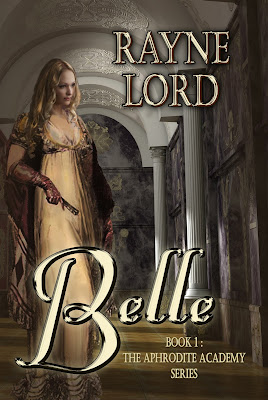 While attempting to put on a good face for her first London Season, Lady Arabella Pierrepont goes home each night to endure the raucous attention of her father’s gaming partners. One evening, when Baron Pierrepont reaches a new low, offering his daughter’s virginity to the next winner, Gabriel, Viscount Ashford, helps Arabella escape. He takes her to The Aphrodite Academy, where she is given three choices: the respectable but dull life of a companion, a marriage well below her station in life, or training to become one of London’s finest courtesans. Since she has taken men in dislike and would like nothing better than to drain their purses dry, she chooses the scandalous life. But none of the armor she has thrown up can protect her when the highest bidder for her services is Lord Ashford, the one man she considers a hero. Both must grow wiser and listen to their hearts before Belle can put the abuse she suffered behind her and Gabriel can shed the casual sexual practices of the so-called Regency gentleman.

Author’s note: I think of The Aphrodite Academy series as “Regency Darkside,” stories that go beyond the usual Regency Historical to explore what might have happened to young women, from ladies to tavern wenches, for whom life was unkind—young women with no family or friends willing to help when their lives fall apart. In this series each girl will each find The Aphrodite Academy, or it will find them. The headmistress is a widowed baroness, left in charge of a remarkable fortune by a husband whose proclivities were as eclectic as they were enthusiastic. She has, perhaps not surprisingly, barred all males from the grounds of the Academy, where she offers academic classes, arranges suitable positions for some of her students, and offers training in the fine arts of the courtesan to those who wish it .

The language is saucy, the sex occasionally graphic. But the stories are driven by plot and character, not the sex scenes.

Grace, who now writes as Rayne Lord as well as Blair Bancroft