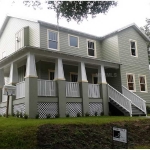 On Saturday I viewed a new venture for Reale Realty (my daughter is owner/broker), a brand new home - 1921 Hamilton Lane, Orlando. (They took over the project mid-stream from the builder.) Believe me, it's the ideal family home - oodles of room, high school across the street, play park just down the block. Full of upscale details like cooled wine storage in master bedroom as well as kitchen, pull-out microwave, window-seat storage, fully finished basement & wrap-around porch! And then there's that shower big enough for a party! Garage is under the house, approached from the street in back.) For more photos, please click on Investisource   Scroll down to 1921 Hamilton.


I've been working with my EC Blush editor on Florida Wild this week, and that brought up an important topic I'm also going to insert before Part 2 of "Show vs Tell."


Working with an Editor

Rule # 1(which equates to the classic business credo, "the customer is always right" - except you're not the customer):
Whether you're working with a New York editor, an e-publisher editor, or a private editor, you've got to be willing "give."  Both NY publishing houses and e-publishers have their own style sheets. And their style sheets may differ from what you were taught in school, what you used all the way through college. In a major NY publishing house, you will have an editor and a copy editor. The editor will point out awkward sentences, suggest plots changes, character changes, dialogue changes; i.e., a whole range of things he/she hopes will improve your book. The copy editor (usually a new hire, just out of college) is looking for grammar and punctuation problems, checking facts and continuity; i.e., performing an overview of the "nuts & bolts" of your manuscript, not making suggestions on the style or content of your writing. And, yes, they make mistakes. Copy editors you can challenge. I once had one put a decimal point before 9mm! Then again, they just might be right. Have a good grammar book handy so you can check before you complain.

When e-publishing came along, the editing scene changed, the job of editing and copy editing falling on the shoulders of a single editor, working with an author electronically, usually via MS Word's Track Changes. (Electronic submission and editing proved so much easier, by the way, that it has become the norm for the entire publishing industry, print & e.) In most publishing houses there is a Senior Editor who resolves disputes between the Author and his/her editor. And, yes, you have the right of complaint. That's what scrawling "Stet" in the margin was for back in the good old days and what the "Reject" icon is for on the Track Changes menu. But you'd better add a really sterling comment on why you don't agree!

When all the sound & fury is done, however, that Senior Editor is going to win. So save yourself a lot of angst and accept it. If that's what a particular publisher has in its "Style Sheet," then that bit of punctuation is written in stone. You wanna be published? Take your lumps and give in. Being a Chicago Manual of Style devotee, I fought tooth and nail against the rules of a certain e-publisher whose Style Sheet basically says: "If the sentence makes sense without punctuation, don't use any." Aargh!

But I learned my lesson. I don't complain any more. I bite the bullet and hit the "Agree" icon straight down the page, trying not to wince as all my beautiful commas and that final "s" in my possessives are stripped away, my ellipses compressed into a fraction of the space they once took. (Hey, that's not a pause, that's a hiccup!)

So whether this is your first time working with an editor or your fiftieth, you're the one who has to decide: Do you want to have things your way, or do you want to have a check arriving every month for the books you've sold? Ninety-nine times out of a hundred, that answer should be self-evident.
As for working with a private editor, you have much more flexibility. You can accept or reject what your editor says—though never, ever ignore a dangling participle! Keep in mind, however, that you paid for that person's expertise, so it might be a good idea to seriously consider he/she might know what they're doing. Think carefully before hitting the "Reject" icon. We may work at home at odd hours, and in a remarkable array of casual clothing, but we do have a "boss" out there. And that "boss" has a "boss" who has a "super boss." And if you want to be paid for your labor, it's likely you're going to have to compromise.

Today's Show vs Tell example is from a First-person manuscript. It's a real challenge not to fall into "tell" mode when there's just one person tasked with "presenting (showing)" the entire book. I hope I've sufficiently massacred a scene from my current work in progress, Brides of Falconfell,to demonstrate what I mean.

Note: I did three new Show/Tell examples in all. (One third-person example was posted last week.)  If anyone would like to see Example 3 - based on an all-male scene from Rogue's Destiny -  please e-mail me privately at Blair Bancroft

Example of First Person in "Tell" Mode:  (the perfectly dull version you do not want to write)


When I visited the nursery the next morning, Violet was wearing a party dress with tiny puff-sleeves and a high-waisted skirt. It was clear her mother’s long illness had not stunted her growth.

I asked Nanny Roberts if there were any trunks of old clothes in the attic and she said yes, but they were probably silks, satins, and the most delicate linens. “Perhaps some undergarments?” I suggested.

Mrs. Roberts took a deep breath and declared there was only one way to find out. And off we went, Nanny leading us down a long dark passage which seemed to follow the ridgeline of the roof. The attic, when we finally got there, was dimly lit, and it took a long while to find enough suitable fabric. The garments we chose were heavy. I wondered how the ladies of the eighteenth century had managed to walk.

And then came a more serious problem. Either I sought out Martha Beaseley, the family seamstress, which would alert Mrs. Maxwell to our being in the attic, or I attempted to create the garments myself. It was a dilemma, but Violet was enough of a challenge without instigating another confrontation with Mrs. Maxwell so soon.

Violet had the strangest expression on her face when I bent down to kiss her. I wondered if she was excited by the thought of new clothes.

When I returned to my room, I spread the mound of treasures on my bed. Perhaps I was overly optimistic about Violet’s new clothes. No, surely Bess and I together could get the job done.

The next morning I visited the nursery and found Violet arrayed in another party dress, this one with tiny puff-sleeves and a skirt falling from a high waist in a series of ruffles that ended half-way between her knees and ankles. Whatever the effect of her mother’s long illness, ’twas clear it had not stunted Violet’s growth.

“Are there trunks of old clothes in the attic?” I asked Nanny Roberts.

“Indeed, miss, I’m sure there are, though probably only the best were kept.”

Silks, satins, the most delicate linens . . . I heaved a sigh. “Perhaps some undergarments?” I suggested.

Mrs. Roberts’s took a deep breath, her plump breast swelling to pouter pigeon proportions. “There’s only one way to find out,” she declared.

“Must we ask Mrs. Maxwell for a key?” I asked, my voice dropping to a totally unnecessary whisper.

“The door at the top of the servants’ stairs is kept locked,” she told me, her gray eyes lit with a conspiratorial gleam.“but not the door from the nursery corridor.”

And off we went, with Nanny Roberts leading us through a small door at the end of the corridor and down a long dark passage which seemed to follow the ridgeline of the roof. I carried a single candle inside a glass chimney, while Mrs. Roberts wielded the nursery’s straw broom, a clear necessity, for no one had come this way in a very long time except creatures I didn’t care to think about. My skin crawled but I could not show fear in front of Violet, so we kept moving forward. Falconfell seemed to have grown twice as broad since yesterday’s circumnavigation.

At long last, another door. If it was locked, I was going to be hard put to suppress a scream. Of frustration, of course, not a fear of small dark places with multiple webs and rodents.

The door creaked open. Light! After the corridor we’d just traversed, the dim light from small attic windows seemed like the brilliance of the sun at high noon. I carefully set down the candle just inside the immense attic storage space and stood quite still, my eyes widening at the jumble ranging before me. Broken and cast-off furniture, rolled carpets, small trunks, large trunks, sea chests . . .

More than a hour later, defeated by red eyes, runny noses, and hacking coughs, we slipped back into the passage beneath the roofline and carefully closed the door. Nanny Roberts juggled both broom and candle as my arms were laden with a surprising array of garments from sturdy petticoats to ancient livery to linen and muslin gowns with so many yards of fabric I staggered under the weight. Merciful heavens, how had the ladies of the eighteenth century managed to walk? Perhaps their hoops took most of the tonnage.

And now a more serious problem, I thought as we finally emerged into the space outside the nursery with its broad windows overlooking the valley. Either I sought out Martha Beaseley, the family seamstress, which would mean Mrs. Maxwell discovering our raid upon the attic, or I attempted to create the garments myself. Fortunately, I’d spent a full three months in my elder brother’s household when his children’s beloved  nanny had rushed away to attend her father’s final illness. During that time I had mended enough gowns and skeleton suits to have a good idea of how they were constructed. The gowns, fortunately, being much easier than the fitted boys’ garments with all those buttons.

Coward! my inner voice mocked as I determined to make the gowns and undergarments myself. But Violet was enough of a challenge without instigating another confrontation with Mrs. Maxwell so soon. I would give Hammersley time to work a miracle in that direction if he could.

When I bent down to give Violet a hug, she had the strangest expression on her face. Excitement? Had she enjoyed our morning’s adventure beyond the confines of the nursery? Or was it hope—someone other than Nanny was noticing her at last? Or did she possibly feel a thrill at flaunting the rules, for there could be no doubt she sensed that Nanny and I had stepped beyond that bounds of what was expected. I looked straight into those unfathomable dark eyes, so like her Aunt Maud, the witch, and promised to return later that afternoon.

Fate was kind and I managed to slip back to my room without being caught with my great mound of treasure. I spread the various items out across my bed . . . and grimaced. What was that saying about biting off more than one could chew? I would have to enlist Bess’s aid. Between the two of us, we’d get the job done.