I frequently complain that everyone thinks I only write Historicals - Regencies in particular - yet my Medieval, The Captive Heiress, recently won the 2012 IDA awards and my Romantic Suspense, Shadowed Paradise, received Second in Suspense. So a moment out from my latest Editing series to take a look at my "other" books, whose genres are: Contemporary Romance, Romantic Suspense, Thrillers, and Mystery.

As with my other recent book lists, I am going to challenge myself to write a blurb "off the top of my head"; i.e.,without looking at any prior material. 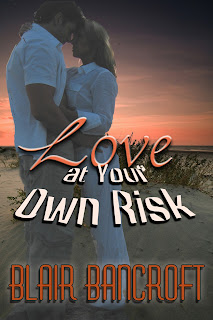 Love at your Own Risk

This is the book where I bowed down to category "rules & regs" and wrote to formula. Sold it on the first try. Sigh. It's short, it's cute, all 50,000 words of it. And came out the same month as my 140,000-word epic e-novel of the Peninsular War, The Sometime Bride. If I didn't claim both books, I doubt anyone would believe they came from the same author. It was a case of "Bite the bullet if you want to sell to New York."


Actually, Love at your Own Risk has a special place in my heart because it's set on Cape Cod, and what could offer more Conflict than Homicide Detective meets Defense Attorney? 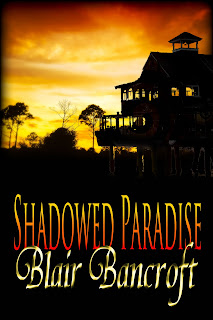 Shadowed Paradise is serious Romantic Suspense, with a serial killer providing his own intermittent mad commentary between the attempts of a widow with major baggage and an ex-government agent-turned-developer to make new lives for themselves.

Remarkably, a number of the incidents in the book are true, including the dog & skull tale. 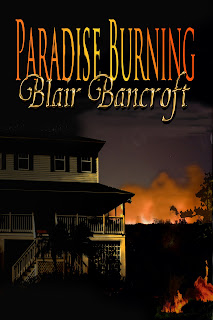 As you can guess from the covers, Paradise Burning is a follow-up to Shadowed Paradise, with several characters from the earlier book providing back-up for the beleaguered couple in this book. There is also a highly unusual, and controversial, secondary romance.

Logline:
An author hires a researcher for a book on the trafficking of women and children—a researcher who happens to be his estranged wife. After studying instances from all over the world, they discover trafficking in their own back yard. 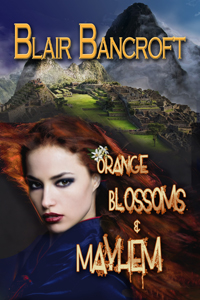 Our heroine is a troubleshooter for a business that arranges exotic weddings and vacations. All goes well, if  occasionally frantically, until she is asked to create a series of Fabergé eggs arranged as Russian nesting dolls. After that, from Peru to France to good old Golden Beach, Florida, everything goes wrong. An intrepid heroine, the Russian Mafia, Interpol - this one is a Thriller. 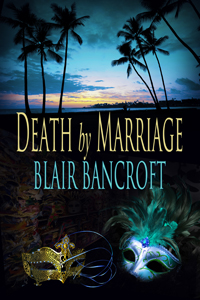 A mystery in a costume shop and a look at seaside Golden Beach, Florida, as opposed to the jungle interior in the Paradise books or the "downtown" of Orange Blossoms.

Logline:
A talented young designer can't resist the urge to investigate who murdered one of her favorite customers. The new police chief from Nebraska is an eyeful, as, in reverse, is an old friend who turns up with a serious case of PTSD. And then there's the elderly customer who is being scammed out of a fortune, more deaths, our heroine's brother being accused of murder . . . 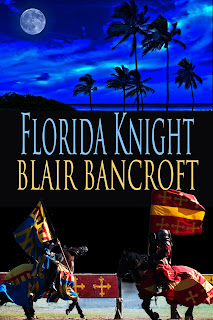 Although many scenes in this book take place in state parks in Central Florida, the heroine lives and works in Golden Beach, this time in the agricultural "orange grove" part of town. Florida Knight is a mystery, a romance, and a look at the Florida branch of the Society for Creative Anachronism during the years I was a member while living in the town I call "Golden Beach."

Logline:
A Florida Highway Patrolman and a member of a Medieval re-enactment group clash as he tries to find out how his brother was badly injured in a tournament. She has come to Golden Beach to escape an abusive relationship and thoroughly enjoys whaling on men each weekend at Medieval tournaments (fought with long poles wrapped in duct tape). He is appalled at the thought of wearing a costume.

Florida Knight presents Medieval Times in contemporary Florida - and, yes, Virginia, it really exists. I lived it, giving away my "garb" only when I moved to Orlando.

Note: In future Golden Beach books, I plan to have more crossover characters from the various "Beach" books. 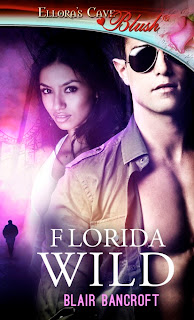 Although the action takes place in and around Orlando, the owner of the Private Security agency in Florida Wild is the eldest son of the family who arranges exotic weddings and vacations in Golden Beach in Orange Blossoms & Mayhem. Others in the agency, including the heroine of Florida Wild, are his cousins. Florida Wild will be published by Ellora's Cave Blush later this year.

Logline:
A young woman who wants to get off the phones at a private security agency and out into the field does so with a vengeance as she saves the life of an Arab child and becomes involved in kidnapping, murder, and a massive manhunt, which ends with her worst nightmare, fighting for her life at the apex of a wooden rollercoaster. (Seen in the background on the cover.) And, oh yes, mustn't forget the hunky American whose sister is married to an Arab prince. 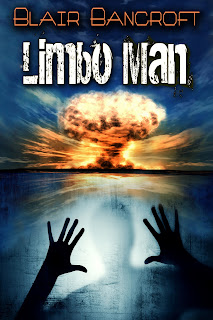 Based on a true story told by a retired CIA agent at the Ivy League Club in Sarasota.

I have to admit to a particular fondness for this one. Take one Russian obsessed with his father's guilt. Add an FBI agent on loan to Homeland Security because she speaks Russian . . . and has other assets. Stir in a host of government bosses, spies, secret agents, and criminals from both their families, and you have the ingredients for a Thriller. Though surely our hero and heroine are about as likely to be attracted to each other as they are to find the nuclear bombs they're looking for. Then again . . . somewhere between New York City, Connecticut, Colorado, New Jersey, Orlando, Siberia, Teheran, Moscow, and St. John's, there's a lot of room for non-nuclear fireworks.

Added factual tidbit:  Just this week the Army Corps of Engineers announced it is going to dig up the "track field" at the elementary school mentioned in Limbo Man. Plus the yards of even more houses than it dug up c. 2007-2009, when the Corps found more than 400 unexploded bombs and literally "tons" of bomb debris. History of this debacle: the elementary school and several upscale housing developments were built on the old Pine Castle Bombing Range (WWII) with no disclosure to the buyers. (But you know Orange County knew about the bombing range when it built that school on Ground Zero of what was once called the Pine Castle Jeep Bombing Range! Hmm - perhaps they thought bombs were biodegradable.) The airfield, by the way, became Orlando International Airport.

The Art of Evil

I'm hoping to have my hardcover mystery, The Art of Evil, ready for indie pub sometime late in 2013. Its setting is Sarasota, which is but a hop, skip, and jump from "Golden Beach." The Art of Evil is set on the thinly disguised sixty-six acres John & Mable Ringling left to the State of Florida, including the Art Museum, their waterfront mansion, and their oversize garage featuring circus memorabilia.

Special Note for those not familiar with Florida: the background in all my Florida books is authentic. I have lived here for 30+ years now and am careful to keep my settings authentic.

Next blog: I was having a hard time choosing which EDITING topic should come next - until I read a book this week that made every amateur mistake "how to" authors preach against. (And it wasn't an indie book either!) So . . . next week: examples of that ultimate classic, "Show, don't Tell."