My regular blog readers will recall my rant about "How Not to Write a Book," which was inspired by my efforts to insert a character from Tarleton's Wife and O'Rourke's Heiress into a book that was already written with a different hero. Why? Because I created Jack Harding nearly twenty years ago, let him almost get hanged, let him be disappointed in love, and never gave him the "happily ever after" ending he deserved. Part of the problem was that I never could find the right woman for Jack. And then one day I realized I already had her, except she was the heroine of a book languishing on the back burner because it never felt quite right. So all I had to do was switch heroes, right?

Wrong. I had to delete the original hero and at least half his friends. I also had to delete my heroine's Abenaki half-brother, a character I absolutely loved - which was the problem, because he outshone the hero and might even have drawn attention from Jack as well. (It's always important to keep that spotlight shining on the hero and heroine.)

And then I had to go through and revise word by word to make Jack sound like Jack and not like the original hero. And make my heroine sound as if she were talking to Jack, not the previous hero. And then I had to write the last half of the book from scratch to accommodate all the changes made in the first half. Sigh!

So it took a while - frankly, just about as much time as writing the book from scratch, and with a lot more hair-tearing. But Rogue's Destiny is finally live on Amazon Kindle and Smashwords, with, hopefully, other e-reader formats available in two-three weeks. 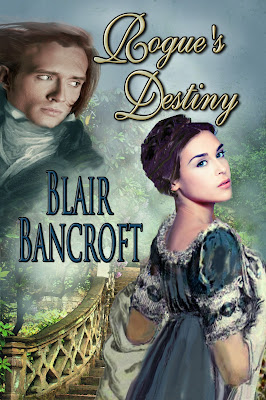 Warning:  Although the story of Rogue's Destiny stands alone, it contains major spoilers for the previous books in the Regency Warrior series: The Sometime Bride, Tarleton's Wife, and O'Rourke's Heiress.

After suffering a broken heart and barely escaping the hangman, Jack Harding escapes his past by becoming the head of a private army and spending his leisure moments as a Devil's Disciple, a group of rakes who model themselves on the old Hellfire Club. But, to his surprise, he discovers that beneath the cold steel of a mercenary lurks the heart of a knight errant. When he meets a young woman from Quebec, alone at an inn on the road to London, he is enchanted, and shocked to find the young Canadian not eager to play by the rules of the Devil's Disciples.

Victoire du Bois, daughter of a Canadian courier de bois and granddaughter of an exiled English nobleman, has come to live with her lofty-titled relatives in England. But when they fail to meet her in Plymouth, she begins to wonder if they truly welcome the arrival of the young woman who is destined to inherit a large trust fund they might prefer to keep in the immediate family. A series of attempts on her life confirm her doubts, leaving Victoire with nowhere to turn but to the rake she nearly shot at an inn on the road from Plymouth.

Reminder: a 20% free read is available on Smashwords