WAY DOWN UPON THE SWANEE RIVER, Part 2

Today's blog is a continuation of last week's tale about my trip to the Suwanee in northern Florida. If you haven't read Part 1, you can scroll down and find it below this post.

Cliffhanger: What was a deputy sheriff doing at the family hideaway in the middle of nowhere at 3:15 a.m.?

Would you believe, someone in this back end of nowhere saw the truck driving past at 2:30 a.m. and called the Sheriff's Department because they were afraid we were thieves about to take furniture OUT of the house? We reassured the deputy that we were bringing items IN, not taking things out, and that the home was under new ownership. (I guess with a mother, grandmother and three young children all hovering in the background, the three men didn't look too criminal.) We also told him we were delighted to discover that such a good watch was kept on such an outlying area. Whew! Now we could finally go to bed.

I paid little attention to my room in the middle of the night, except to take great care winding my way through the narrow corridor to my bed. But while huddling in there the next day, editing a manuscript, while our three guys tiled and laid floorboards so diligently there was no place to walk, I made a list of the contents of the room: an ugly utilitarian desk with high top, obviously salvaged from the original furnishings. But it was mostly hidden behind an anonymous 4 x 6 wood panel the men dragged in just before starting the floors. In a corner by the desk: numerous 10-foot strips of white molding, five fish poles (with a good-size fish net on top of the desk extension). Also in front of the desk was a huge cardboard carton (30x30x30?), which was supposed to contain pillows but was later discovered to be full of assorted comforters and blankets. (Note: I'm just getting started!)

I laid out my water glass and eyeglasses on an unopened, upturned box of an 18-piece set of pots and pans (which the kitchen was not yet ready to receive). My cosmetics bag sat on a pistol target! At the end of my bed were three folding chairs (folded) and five huge cartons of canned vegetables. The closet (doorless) was stuffed with an assortment of unidentifiable oddments. About all that stood out in the jumble was a sewing kit I had put together for my daughter at some time . . . and a liquor bottle. Oh yes, my room was also doorless. I didn't get a door until late Saturday morning - when we talked the guys into taking a break from doing floors.

This is the kitchen on Labor Day weekend. Fortunately, by the time I arrived a couple of weeks later the kitchen had acquired a coffee pot, a toaster, and some utensils. (No sugar.) So, thank goodness, we were able to have coffee & pastries for breakfast.

I am happy to say that when we walked down to the river, we did not see a single one of the above. It is, however, exactly like the spider we hit when we were creeping past the truck on the grass verge during our emergency on the Florida Turnpike. No wonder the little girls screamed every time we rolled down the window to talk to the men. They were certain the spider was clinging to the car, just waiting to jump in. We did see some some insects on our walk to the Suwanee—about 3-4" long, wearing a yellow & brown camouflage pattern. We eventually discovered they were praying mantises. Very odd, as the ones I'd seen in Connecticut were c. 6" and lime green. (The difference between lawn mantises and woods mantises?)


While the men sawed, glued, grouted tile, and moved large appliances, the five females drove to town (an hour round-trip). I shopped for groceries (including two kinds of sugar!) while my daughter bought the curtains, draperies, & couch cushions seen above, plus a "grout sponge" the men said they absolutely had to have. Also the kitchen towel, oven mitts, knife set, etc., seen below. By Sunday the place was almost looking civilized. My room? Still exposed to the outside world (no curtains), but at least I had a door between me and the hallway!

Beautiful, right? Except that shortly after we returned from town, I heard a scream and came dashing out of my room to find a tableau of people poised outside the open door beneath the sink. It seems the exterminator had been there while we were shopping, and when my daughter opened the cabinet door, there was a mouse stuck to some kind of mouse-trapping sticky paper. The problem - the mouse was still alive and no one would touch it. Among our three brave men, only one was willing. He told the little girls he let the mouse go outside. It is, however, far more likely the mouse is now resting in mouse heaven.

However, the house now boasted a full floor, genuine wood dining table and six chairs, plus a just-hung chandelier, so about an hour later we had our first meal in the hideaway. Hamburgers grilled on the screenless screen porch (which also contained mountains of timber and a skill saw). With the addition of chips, salad & dressing from the groceries we bought in town, we dined in what seemed like true splendor after all the chaos.

We even found some time to play. I thought to help the six-year-old play poker but when I advised folding, she returned a resounding "No!" And won. On the family's next visit, however, the nine-year-old beat everyone with a Royal Flush, as can be seen below. 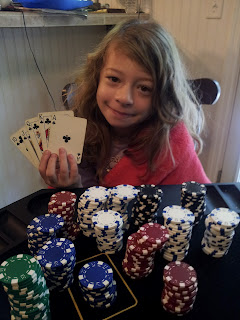 I hope you've enjoyed this all-too-true tale of "Way Down Upon the Suwanee River." When I sang Stephen Foster's song as a child in New England, I never expected to actually see the river. Or spend a couple of nights in a hideaway along its banks.


One can't help but wonder if "getting away from it all" is worth the angst.


Thanks for stopping by. If no other unusual adventures crop up, I hope to get back to writing topics in my next blog, most likely a response to a question I was asked at a recent book-signing: "How do you develop your characters?"

P.S.  If you're so inclined, please check out my website at http://www.blairbancroft.com/  or simply search "Blair Bancroft" on Kindle, Nook, Smashwords, Sony et al.