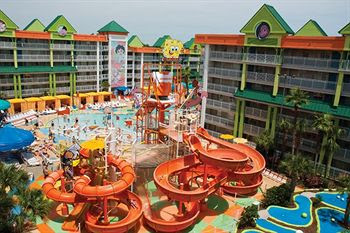 My guest blogger today is Hailey. She is eight years old and will be entering third grade later this month. When Hailey and her younger sisters returned home from a weekend at Nickolodeon Suites Resort, her mother, fearing the three girls might be too spoiled by living in the Orlando area to appreciate this rare treat, asked Hailey, the oldest, to write about their trip. This is what she wrote—unedited, except for an occasional bit of paragraphing.

We went to the car and we’re driving to a suprise place and we have no idea were we’re going. We were driving for 20 minuts. Before that I said “How much longer.”

So we get out of the car and get our suitecace and we go to this place so we can get our wristbands and spend money to get a room. When all that was done, we were walking to the elevater but befor that we passed this amasing place. It was a waterpark, with a pool. Awsom slides, Jaccuzi, miny golf, Basketball, and slime. I said I want to go there.

We got to the elavater floor number 4. When we got up there are room number was 1240. We get the card and waved it around for 1 second. And then a green light went on and then we could open the door then we went inside and we ran into our room. There was a Spongebob room. But there were only 2 beds. So we all had to sleep sideways. [the three girls, ages 5, 6 & 8 in one bedroom of a 2-bedroom suite] We quick got our bathing suits on. And our shoes, and went to floor 1.

And we had to walk a long time around. Like 5 minuts. And then we found the entrance. So we put on sunscreen. And I went on the slide. They were water slides, and were so fun. I started going on every slide. I even get slimed. And we went into the pool. After the water part we took a bath. We got dry. We went to the Nickalodean Mall. I was in a show called Slimetime live. It’s a show where you are on eather the Red team or the Blue team. I was on the Red team with Mommy. We did trivea and games. The Blue team lost so the kids had to put pie on there face. My team won so I got slimed. There was a bunch of slime. One of the games I did was I had to get marshmellows into the cup. But you couldnt use your hands. Just your mouth. It was easy.

And after the show we sat in the lounge/Bar while mommy played video games. Then we walked a long time to the room and watched TV while mommy and daddy watched their TV show. Then they came to our room to turn off the TV so we could go to bed and we played a little bit of “Baby.”

[Grace note: At this point Hailey got tired of writing, as happens to us all. She finished the story by dictating it to me.]

And then Daddy came and he bought us burgers, and Cassidy got grilled cheese. And then we went back into the pool. Cassidy learned how to a dog paddle in the pool. And I wanted to go on the slides, and then after a few rides I went back in the pool with mommy and daddy and Riley and Cassidy.

We went to the Jacuzzi,* and right before we left we went into the mini golf area. After that we went back to our room to take a bath. We did a quick bath because we wanted to see the show that I was in, but I really wasn’t in it this time, I just saw it. We played at the arcade and got our tickets from the booth that has the prizes. We went into the bar again so mommy could play games, and daddy taught me a different kind of math. When mommy was done with her game, we left into the room, and we watched a couple of shows before bed, and we were packing a little bit. While we were packing, mommy and daddy were watching their show while they were packing. We went to bed for the last night.

The next morning we finished our packing and we were walking to the parking lot and we left. Then we were driving home, and we sat on the couch at our house and watched TV.

It was a great treat, and it was very fun.

[*I typed Jacuzzi with a small j and Hailey asked why it had a red line under it. We spell-checked it and discovered it should be capitalized, something she’d actually done when writing “Jaccuzi” above.]


As you probably guessed, Hailey is my granddaughter, and I suspect someday she may walk in the footsteps of both Gramma and Great-gramma (Wilma Pitchford Hays) who wrote children’s books.

Thanks for stopping by. Next blog: the cover and blurb for my Romantic Suspense, Shadowed Paradise, which I plan to put online sometime in the next week.