Welcome to Part 2 of my photo essay, “England at 3mph.” So far, I note, the comments here, and those I’ve received elsewhere, have all been in favor of travel at an early 19th c. pace. If you’re interested, Duke & Duchess are still offering tours. The owner/captain, David, sings opera during the winter and travels Britain’s canals in the summer. I traveled just one short portion of the route. Details for this summer can be found at: www.hotelboat-holidays.co.uk 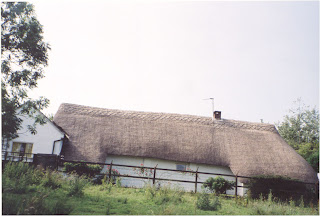 We saw a remarkable number of thatched houses, including this farm. Evidently, the skill of thatching is still alive and well in England.

We spent several days negotiating a long series of locks that lowered our narrowboats to the level of land below the chalk hills. At the bottom we stopped to view the two stea 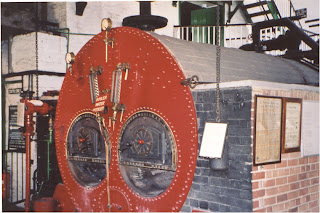 m boilers at Crofton that used to pump the water released by the locks back up to the top of the hill. They are now lovingly preserved as a museum, along with the huge pumps they powered. 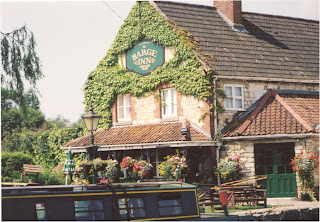 When canals were Britain’s lifeline, transporting goods to all parts of the country, there were many inns providing food and a comfortable night’s rest. A few have survived and are undoubtedly even more picturesque than they were two or three hundred years ago. 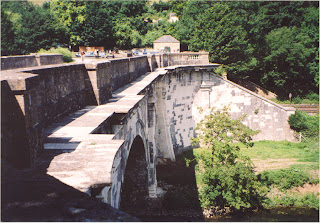 To the right is a two-hundred year-old aqueduct over a valley and a train track. It is still solid enough to support the considerable weight of the canal that passes over it. 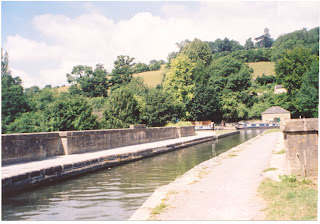 The top of the aqueduct.
Knowing we’d all want to take pictures, our narrowboats tied up long enough to let us walk back and take pictures of the remarkable aqueduct we’d just crossed.


My canal map revealed that we would be passing through Sydney Gardens just before reaching our mooring in Bath. I was particularly interested as I’d had my heroine in La 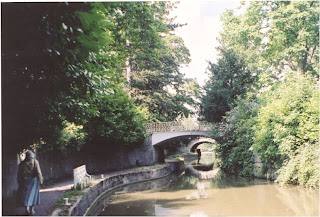 dy Silence watch narrowboats pass by in Sydney Gardens. I tried to find this particular spot during the RWA’s BeauMonde chapter’s Regency Tour in 2003, but turned back because of the dance scheduled that night at the Bath Assembly Rooms. So the minute we were moored, back I went to Sydney Gardens, discovering I was only about fifteen feet from the canal when I gave up. I have since revised that section in Lady Silence to incorporate my updated knowledge about Sydney Gardens and narrowboats. For those who know her, that's Sally Roberts walking the towpath.


Interestingly, the Kennet & Avon canal comes into Bath about three-quarters of the way up the side of the steep-sided “bowl" Bath sits in, giving me an opportunity for this panoramic shot. 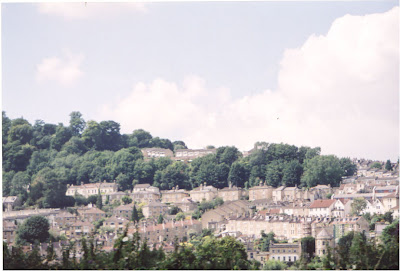 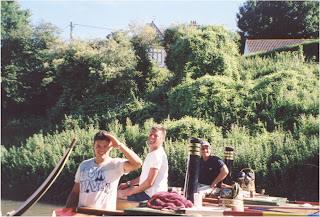 To the left, David, owner/captain of Duke & Duchess is in the rear, plus Vehan & Mikhail, our stalwart crew. Below, our very British passengers around the table we shared for breakfast, lunch, and dinner, and cooked by David’s marvelous chef, his mother. At the head of the table, BeauMonde members who were on the Regency Tour in 2003 will recognize Sally Roberts, who was kind enough to join me for this very special adventure. On the first day of our trip, the 80-year-old gentleman on the left announced very loudly that he didn't like Americans! After that, he ignored me. By the way, he walked almost the entire trip on the tow path, helping with every lock. Amazing. 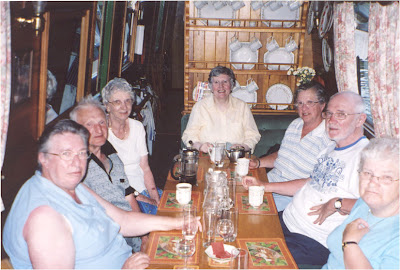 Don’t forget: if you’d like to know more about Britain’s canal system and details of this very special journey from Newbury to Bath, please see www.blairbancroft.com - Random Musings. Special Note: Duke & Duchess aren't just generic. They are named for the Duke and Duchess of Devonshire, with a special signed dedication on the dining room wall to prove it.

Thanks for stopping by. At a later date, I plan to do a photo essay on what Sally and I did the week following our narrowboat adventure, including English gardens, ancient ruins at Avebury, a haunted Tudor mansion, a naughty falcon, and a magnificent Roman tile floor.

Next week, however, I’ll reveal some of the worst mistakes, or near mistakes, I’ve made as an author. So come on back.
Posted by Grace at 9:10 AM

Email ThisBlogThis!Share to TwitterShare to FacebookShare to Pinterest
Labels: England at 3mph, Part 2